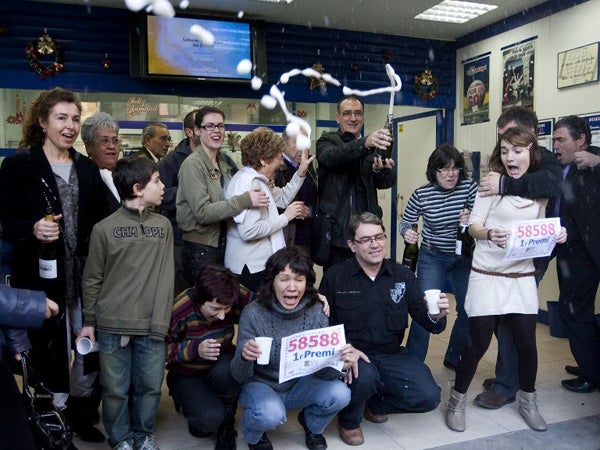 Ticket holders celebrate with the winning ticket number 58.588 after the draw of Spain's lottery named "El ni–o" in Castelldefels, near Barcelona on January 06, 2010. Ticket holders in the town share out 2 million €. It means the top prize in the draw has gone to Barcelona for two consecutive years. AFP / JOSEP LAGO

MADRID – The winners of Spain’s El Nino lottery broke open champagne and wept for joy on Sunday, savoring their luck all the more at a time when the country faces its most severe economic crisis in decades, with unemployment at a record 25 percent.

“I feel great satisfaction, great joy, especially now when everyone is on such a limited budget. It’s really a relief,” one of the winners of the highest prize of 200,000 euros ($265,000) said on TVE public television.

“I have a son who is unemployed, and I will be able to help him with that and (pay for) my younger daughter’s studies,” another said.

El Nino, dubbed the “little sister” of the much bigger El Gordo Christmas jackpot, paid out 840 million euros this year.

But for the first time, winners will have to pay 20 percent tax on any sum exceeding 2,500 euros under Spain’s unprecedented austerity drive aimed at slashing the public deficit.

The tax took effect this year, so the top winners of 400,000 euros each in the El Gordo lottery, drawn on December 22, pocketed the full amount. El Gordo paid out a total of 2.466 billion euros.

The two lotteries are among the world’s most generous, paying out 70 percent of their takings.

The El Nino draw on January 6 – Epiphany or the 12th day of Christmas – is a tradition that began at the beginning of the 20th century.

Millions of jobs have been destroyed in Spain since a property market crash and a global financial crisis rocked the economy in 2008.