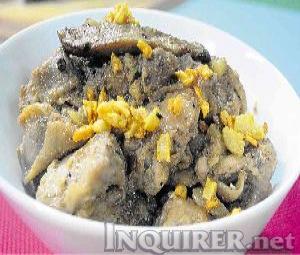 IT’S NOT ENOUGH that Janice de Belen’s adobo is  rich, smooth, meaty, heavy and thick in oil. But, the addition of foie gras and toasted garlic into the quintessential dish makes a huge gastronomic difference.

Even a slice of foie gras in her adobo is enough to make one salivate and crave for more.

“I like my adobo super rich,” says De Belen, who finished culinary arts at Gene Gonzalez’s Center for Asian Culinary Studies and now hosts a cooking show, “Spoon.”
“I’m a rich eater. I know it’s bad but I love all sorts of flavors—garlic, wansoy, citrus, sesame oil and some spicy stuff.”

Hers is a typical adobo minus the soy sauce, that’s why De Belen aptly calls it white adobo since she prefers to use fish sauce to season and balance the acidity of the dish. She adds store-bought liver spread to  thicken the sauce. Sometimes, she dunks in chicken liver pâté to create a more distinct, sharp taste.

“I experimented with pâtés because my friends would give them to me as gifts,” says the celebrity mom. “I didn’t know what else to do with it, so I tried putting pâté in adobo instead of liver spread. I found it even tastier.”

De Belen fell for foie gras the first time she tried it at Jessie Sincioco’s Le Soufflé. She knows how versatile yet delicate it can be. Aware of how foie gras can add zing to any food, De Belen adds slices of the goose liver into the already hearty, sour-salty dish.

“I’ve tried adobo with all foie gras, but it’s so cloyingly rich, nakakaumay,” she says. “So I just put a slice or two on top.”

The foie gras is first seasoned with salt and pepper and then nicely seared, making it a melt-in-the-mouth experience. The toasted garlic adds texture and powerful aroma to the adobo. 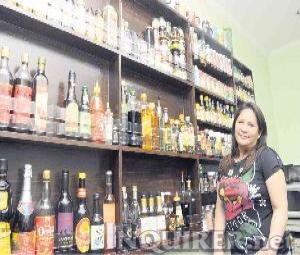 “I really love adobo,” De Belen says. “I like it masuka, mabawang and ma-pepper. The sauce alone makes me crave for more rice. I like scraping the oil in the saucepan. That’s the tastiest and best part of the adobo.”

De Belen’s experience in the culinary school enhanced her desire to really be serious about food.

She’s been in charge of whipping up delectable menus for family and friends’ parties. Among her specialties are roast turkey, prime roast beef, seafood, Hainanese chicken, salads, pastas, buffalo wings and many more. Her kids also love her baked goodies, such as chocolate-chip cookies and cranberry oatmeal cookies.

Sometimes, her children (Inah, Moira, Kyla and Yuan; Luigi, the eldest, has already moved out and married) would request a recipe for her to try out, which she would do.

“That is my satisfaction—when my children finish off the food  I prepare,” she says.

De Belen admits she cooks according to her mood and keeps a roomful of cookbooks; she confesses to reading every recipe in them. Sometimes, even the photo of a dish is enough to rouse her to don an apron and cook the dish. She likes Bobby Flay and Masaharu Morimoto.

Her enthusiasm for cooking is also evident in how she lays out her kitchen. She has a huge center table she turns into a work table with built-in water taps. Beside it is the family’s wooden dining table.

The kitchen is well-lit with open shelves where she can see everything she needs. Mortar and pestle, colorful plates and serving dishes, cookware and other indispensable kitchen gadgets are displayed on the walls, with hanging pots and pans.

What used to be a dressing room near the dining area has now become a cozy nook for all sorts of condiments. De Belen has a rack specially made for spices, bottled dressings and mixtures. Beside it are branded kitchen aids, such as a coffee maker and ice-cream maker.

She dreams of putting up her own restaurant or catering business.

“Honestly, I’m still mustering enough courage to do it, though people have already pledged to support me,” says De Belen. “But just like when I got into culinary school, I was always afraid I couldn’t handle the time. I was also afraid of the financial aspect. Remember, I’m a single parent; it’s not right for me to just jump into and do things. There are too many things to consider.”

In the meantime, aside from being busy with her TV soap  and cooking show, she  holds cooking demonstrations in and out of Manila.

Sauté garlic in oil. Add chicken and pork, Add water and vinegar. Bring to a boil and, without stirring, let simmer over low heat until liquid reduces a bit. Add fish sauce. Add liver spread or pâté.
Put the peppercorns. Let it simmer until the sauce is reduced in half. Simmer a little more if you want a thicker sauce, but don’t wait for the meat to darken.
Before serving, garnish with foie gras and toasted garlic on top.