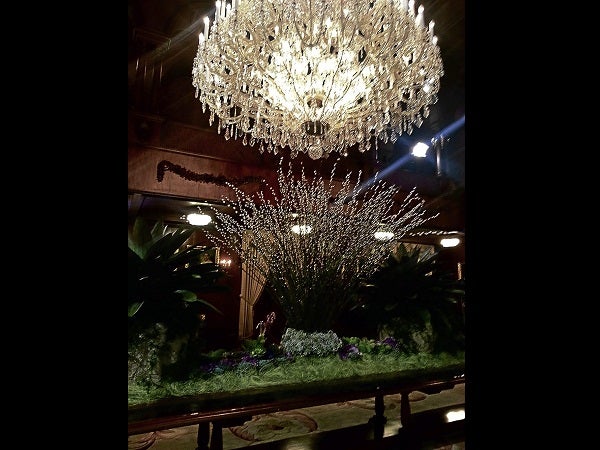 AT THE RECEPTION Hall, the pussy willow is the centerpiece of the long table arrangementmade of bromeliads, cacti and fern. THELMA SAN JUAN

P-Noy talks about his best three hours over the holidays

It wasn’t at all stuck up.

If you have to be up at 7 in the morning and don the terno and maria clara, it’s such a relief—even a good chill—to be in a laid-back ambiance, when you don’t feel you have to flash your five-inch stilettos (which we didn’t have) or be in your drop-dead glam best (again, which we weren’t). The female guests came in their native finery, the men in suits or barong—from the diplomatic community, government, industry, business, and the Church. Yet the scene wasn’t intimidating.

Perhaps it helps that Malacañan really seems and feels lighter now. For one, the wood has a lighter burnish; for another, its main occupant isn’t really a stuck-up guy. Stretched to his physical limits perhaps, because of the load, but not stuck up. 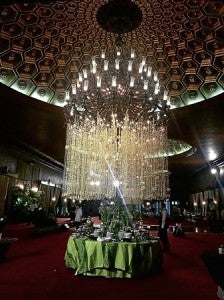 “It wasn’t really Baguio that relaxed me,” he told us, referring to his post-Christmas stay in Baguio. “It was the three hours I spent in Times (street, where the Aquino residence is), uploading music into my iPod.”

Apparently, that was all he needed—three hours over the holidays. At the Vin d’ Honneur, as you walked in, you caught the scent of sampaguita. Hundreds and hundreds of strings of sampaguita hung down the huge chandeliers at the Ceremonial Hall. The platform, where the toasts were given, had tall topiary arrangements of white carnations and lilac cabbage roses. The platform was lined with bromeliads.

It was elegant but not opulent. The choice of blooms was simple and native, except for the pussy willow on the long table at the reception hall. The local color was just right.

The Palace’s in-house team did the arrangements—Jun Mogado, Serge Igonia who provided the sampaguita strings, Nick Raza and Rene Sumalinog who conceptualized the floral scape, and Social Secretary Susan Reyes. Glenda Barretto’s Via Mare did the buffet, which had the chain’s signature bibingka and puto bumbong, and crepe de lechon.

People might have noticed that among the first ones to greet President Aquino after the toast was Rep. Amelita Villarosa, a staunch GMA ally. Was the crossover instant and recent? Not if you asked Rep. Villarosa, who told us that she and Aquino go a long way back to their days in Congress, where Aquino used to call her “Tita.”

There, too, were Sen. Manny Villar and wife Cynthia, who said she has lost a lot of weight working on her projects in Las Piñas. 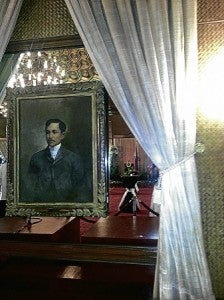 Doris Magsaysay Ho talked excitedly about the contemporary collection they’re putting up at the Metropolitan Museum next month.

Artist Betsy Westendorp Brias invited us to her exhibit this month featuring paintings of clouds, at Manila Contemporary Art. She has always been drawn to the sky, as she painted the sunset (a previous collection).

The mood of the gathering was upbeat.