PDI Read Along champion to kids: ‘Places can be visited by just reading’ | Lifestyle.INQ ❮ ❯ 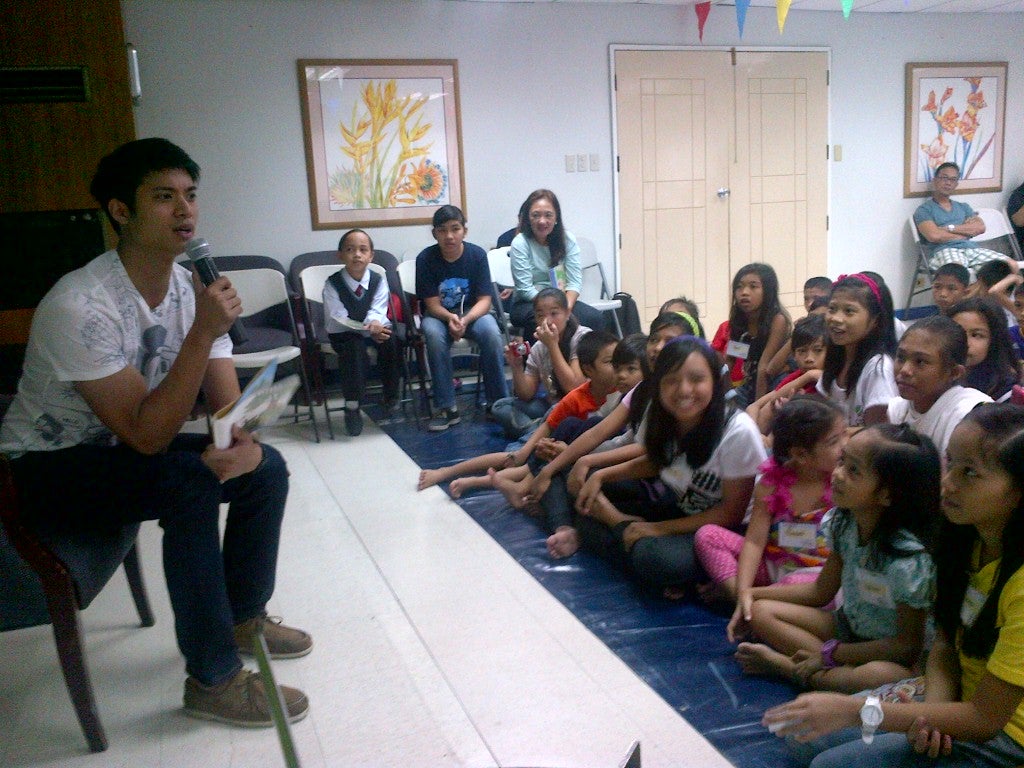 Actor and peace ambassador Mikael Daez reads to children a story about a village where it is forbidden to laugh or smile. Children eagerly participated in his role-playing and acting games.

PDI Read Along champion to kids: ‘Places can be visited by just reading’

MANILA, Philippines – A lot of lessons can be learned from reading. A lot of places can be visited even just by reading at home.

These are the two pieces of advice that Laila Rontos, 12, gave to her fellow children during a recent Read Along by the Philippine Daily Inquirer (PDI) Sunday.

Rontos, an avid-reader, is a champion of the PDI Read Along Festival (10-12 age category) held November last year. She told the story of “Si Pilandok, Ang Bantay Ng Kalikasan” (Pilandok, The Guardian Of Nature) to some 60 students from Virlanie, Laura Vicuna Foundation, and F. Benitez elementary school.

Her fellow champion of the Read-Along Festival in the 7-9 age category, Mark Nowel Eleuterio, 9, told the story of “Ang Hardinerong Tipaklong” (The Grasshopper Gardener) written by Doctor Rose Torres-Yu.

Eleuterio said that he was happy to be able to share the story to children. He said he was able to encourage many more children to read, help nature, and clean the environment after he won in the Read-Along Festival.

Veteran story-teller Dyali Justo of Adarna House excited the children with the story of “The Dragon Who Couldn’t Breathe Fire.”

Actor Mikael Daez, who is also an ambassador with the Office of the Presidential Advisor on the Peace Process (OPAPP), told the story “Si Isem Sa Bayang Bawal Tumawa” (Isem in Grumpy Town) written by Eugene Evasco.

“It was really fun. This is something I’ve always wanted to do. Since November and December 2012 I already wanted to do it, but just didn’t have time to do it because I couldn’t fit it into my schedule,” Daez said.

“I’m really into this stuff, I always tell people health and education are two parts of my life that I’m very proud of and it’s something that I want to be able to share and give to other people,” he added.

When asked what he thinks is the value of teaching peace to children, he said that it was very important since the country has a wide variety of cultures which makes conflict a real issue.

“[Our] first step [as ambassadors of peace] is to promote peace here in the Philippines,” Daez said.

During his story-telling, Daez got the participation of the children by asking them to act out parts of the story. Children eagerly helped him out with some of the scenes drawing laughs and cheers from everyone.

“I think [PDI’s Read Along is] a great program. I think it’s a good start. I believe in doing the small things and even though you’re just storytelling to the kids, it really helps, later on they’ll see the importance of [reading],” he said.