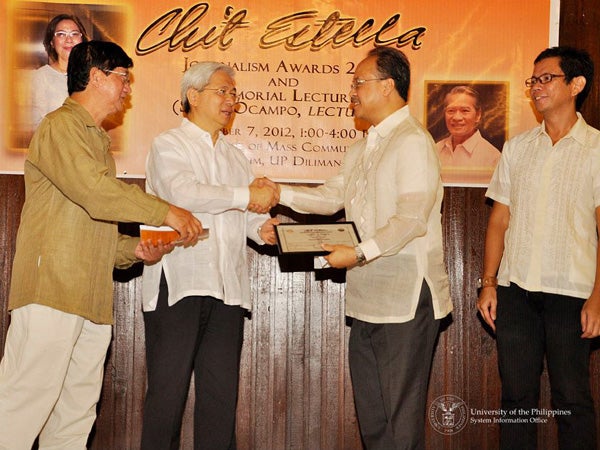 Publisher Raul Pangalangan receives a certificate from UP President Alfredo Pascual on behalf of the PDI reporters who were finalists in the 1st Chit Estella Journalism Awards. On the left is Estella’s husband, Prof. Roland Simbulan and on the right is College of Mass Communication Dean Roland Tolentino. Misael Bacani, UP System Information Office. CONTRIBUTED PHOTO

Lolarga won in the print media category for her piece, “356 political prisoners go on hunger strike.” Silverio, meanwhile, won in the online media category for her stories, “Three months after Sendong, Iligan residents still far from rebuilding their lives” and “In Makati, the poor of Guatemala street know nothing about the city’s wealth.”  Each winner received a trophy and a P10,000 prize.

Finalists in both categories were given certificates prior to the announcement of the winners. Lolarga’s colleagues at the PDI, Tonette Orejas and Julie Alipala, were also finalists in the print media category—Orejas for “Kin of ‘desaparecidos’ keep up fight” and Alipala for “In Sulu, human rights work starts with letting the people know.”

Joining Silverio as finalists in the online media category were fellow Bulatlat.com reporters Ronalyn Olea for “Jonas Burgos, gentle and brave,” and Anne Marxze Umil for her articles, “Privatization of government hospitals, further marginalizing the poor in the name of profit” and “K+12, worsening shortages to greet school opening.”

After the awarding ceremony, a memorial lecture was delivered by journalist, human rights activist, and former Bayan Muna Partylist Representative Satur Ocampo. In his lecture, Ocampo discussed how human rights violations have persisted since the Spanish colonization of the Philippines. In relation to journalism, he said that independent publications flourished because of the anti-dictatorship movement that exposed and criticized human rights violations during the reign of former President Ferdinand Marcos.

Ocampo explained that human rights violations are “systemic and systematic” and have evolved through time with organized struggles for self-determination against the Spanish and American colonizers, the ongoing neocolonial conditions, agrarian reform conflicts, and unjust social, economic, and political structures. He talked about how leaders of Indigenous Peoples groups have been attacked and/or slain because of their resistance to large-scale mining and logging activities, often by foreign companies, in their ancestral domains and lands. Furthermore, Ocampo related human rights violations to existing counter-insurgency tactics adopted from the US Army’s strategies in Iraq and Afghanistan—the shift from “winning the war” to achieving peace by “winning over the hearts and minds of the people.”

According to Ocampo, the administration under President Benigno Aquino III has merged the Philippine’s counter-insurgency program with the peace process in Mindanao—a combination of peace negotiations and field operations. He stated that all operations of the Armed Forces of the Philippines must uphold human rights. Finally, he closed by saying that the doctrine of command responsibility must be instituted and that judicial reforms will address this need. He emphasized that commanding officers must be held accountable if they are aware of the human rights violations committed by their subordinates. Command responsibility, he said, can even go all the way up to the President, as he is the Commander-in-Chief of the Philippine military.

Human Rights Commissioner Coco Quisumbing dropped by the event and advised aspiring journalists to do research and contextualize their reports. She also told students of Journalism that there is a “big burden in becoming a good journalist” and that there is no excuse for “inaccuracy, carelessness, hyperbole, and just plain lying.”

Closing off the program was Prof. Roland Simbulan, husband of Chit Estella. He recounted how the awards and memorial lecture were conceptualized a few months after his wife was killed in a vehicular accident along Commonwealth Avenue on May 13, 2011. The Chit Estella Journalism Awards and Memorial Lecture are intended to keep her ideals of excellent and principled journalism alive. Simbulan explained that the issue of human rights was very important to his wife and that it was only fitting that they hold the event around the celebration of the International Day for Human Rights every 10th of December. Arlyn VCD Palisoc Romualdo, UP System Information Office, Contributor