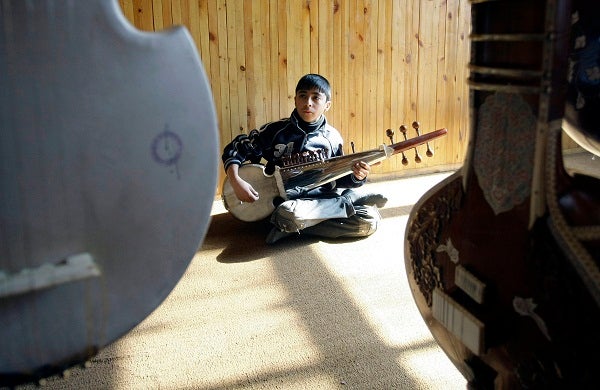 In this Wednesday, Jan. 9, 2013 photo, an Afghan boy, Ahmadullah, 14, practices playing the Rubab in a class at the Afghanistan National Institute of Music in Kabul, Afghanistan. Dozens of Afghan teenagers including former street kids or orphans aged 10 to 22, will be playing in the Afghan Youth Orchestra which begins a 12-day U.S. tour on Feb. 3 and includes concerts at Washington's Kennedy Center - President Barrack Obama has been invited - New York's Carnegie Hall and the New England Conservatory in Boston. AP/Musadeq Sadeq

Young Afghan musicians to tour US

KABUL, Afghanistan — Not so long ago Fakira roamed the mean streets of the Afghan capital, hawking magazines for 13 U.S. cents apiece to support her poverty-stricken family.  Next month, the 15-year-old cellist appears in America’s most prestigious concert halls, performing alongside other former street children and orphans of Afghanistan’s decades of violence.

“Suddenly my whole life changed, and now I am going to America,” she says, recounting her chance encounter with a rather improbable school that’s reviving music, both Western classical and Afghan, in a country where the Taliban had made even listening to it a crime — and where a generation of musicians vanished through killings, old age or exile.

The teenager, who uses only one name like many Afghans, will be playing in the Afghan Youth Orchestra, which on Feb. 3 begins a 12-day U.S. tour that includes concerts at Washington’s Kennedy Center — President Barrack Obama has been invited — New York’s Carnegie Hall and the New England Conservatory in Boston.

“Most reports about Afghanistan are about suicide bombings, killings, destruction, corruption, (depicting) Afghanistan as a place where hope has died,” says Ahmad Sarmast, who leads the youth orchestra. He says the young musicians will try “to show a different Afghanistan, an Afghanistan where hope is alive and the people are striving to bring about changes. The kids are the symbol of hope. ”

The orchestra is the centerpiece of the Afghanistan National Institute of Music, which Sarmast founded 2½ years ago. By all accounts, the music institute is proving a success story in a country where failed development projects — through poor planning, corruption or militant violence — are more the norm.

Its 141 students, half of them former street kids or orphans ages 10 to 22, study free of charge in a well-ordered, two-story building stocked with mint-condition instruments, new computers, a distance learning center and the country’s first instrument repair shop. Rising nearby are concert and rehearsal halls scheduled for completion this summer.

A cacophony of sounds echoes down the school’s first-floor corridor hour after hour. In one practice room, four girls practice scales on oboes under portraits of Bach, Mozart and Beethoven, whose “Ode to Joy” theme emerges from a trumpeter down the hallway. The rubah, sitar and sarod — traditional Afghan string instruments — and the tabla drum are being played in other rooms.

The 48-member touring company, which also includes three smaller ensembles, will perform both Afghan pieces and specially adapted Western classics when they will be joined by members of two American youth orchestras. One program item, titled “Four Seasons in Afghanistan,” fuses Antonio Vivaldi’s popular concertos with Afghan melodies played on traditional instruments. It’s the handiwork of William Harvey, of Indianapolis, Indiana, a violinist and graduate of New York’s eminent Julliard School who serves as the institute’s principal conductor.

Urbane and articulate, Sarmast has also been able to attract seven resident foreign teachers, visiting artists and hefty funding and donations from foreign governments, private sponsors and the World Bank, which provided $2 million and is exploring how the institute can be used as a template for other vocational schools in the country.

Son of a famous Afghan composer and conductor, Sarmast sought asylum in Australia after the Taliban swept into power and perpetrated what he calls “nothing less than musical genocide.” Obtaining a doctorate in musicology, he returned home after the 2001 U.S.-led invasion toppled the Islamist group to “give back to my society.”

For some at the institute, Sarmast’s words ring true.

“When I return to the orphanage and there is no trumpet, I miss my mother,” says Meena Zamani,  a 10-year-old orphan just beginning to master the instrument. “Playing takes away all my sadness.”

Fakira remembers watching students in neat, clean uniforms going off to school while she and her two brothers scoured the streets for money to help their jobless father, mother and five other siblings. She was finally offered some schooling at an orphanage that took in the poorest of children and where the institute was spotting for the musically talented.

It was love at first sound when Fakira heard the “soft, comforting” tones of the cello.

“When I pick up and play my cello, the hard times, the bad feelings vanish — I forget,” she says. Now, like other former street children, she receives a monthly stipend of $27 to compensate for lost family income, studies English and other subjects offered by the institute and looks forward to seeing the White House and the bright lights of New York City.

But she and her fellow students also express anxiety, wedged as they are between the tragic past and an Afghanistan that could again descend into chaos after the departure of U.S. and other NATO forces in 2014.

“I am not sure about my future as a musician in Afghanistan. But I love music so that’s why I came here,” says 22-year-old Shabeer Aharad, practicing the oboe in preparation for the American journey and heaping praise on his school and teachers.

Other efforts to bring back a rich musical tradition, including a onetime budding Western classical scene in Kabul, have not proved so successful.

The ragged instruments at the country’s only university music department include one beat-up drum and a decrepit cello, with even music stands lacking. There are very few seasoned Afghan instructors and only two foreigners.

One is retired, 64-year-old Faith Rynders, who volunteered to come to Kabul University from Bemidji, Minnesota, hoping her career as a pianist and voice teacher could prove useful in building a new generation of musicians.

Despite the hurdles she faces, it has.

In an almost bare room, pierced through with bitter winter cold, one of her students slowly places his hands on a piano keyboard. “The fingers get so stiff,” says 22-year-old Fawad Sultani by way of apology. Then the lean, handsome pianist unfurls the rapid runs and yearning themes of Frederic Chopin’s Fantaisie-Impromptu in C-sharp minor.

Rynders stands at a distance, smiling. “I’m very proud of him,” she says.