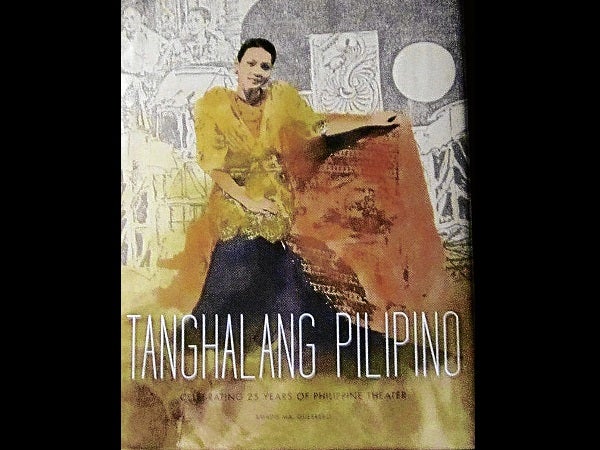 One fine day, Nanding Josef, the articulate artistic director of Tanghalang Pilipino (TP), resident drama group of the Cultural Center of the Philippines, called up to announce that TP’s 25th anniversary was fast approaching. And would I like to write a book about the organization and its accomplishments?

Hmm. Definitely I was interested. I hadn’t written a book for several years, and was tired of living in genteel penury like some aging character in a Henry James novel.

So initial meetings were set up, an outline was drafted, a budget was prepared, and the go-ahead signal eventually came from the TP chair, Tonyboy Cojuangco, and its board of trustees.

For about a year I would go almost daily to the TP offices located behind the CCP and immerse myself in their archives, which were more or less in good order. I pored over the bound volumes, souvenir programs, historical background, notes from the directors and production designers, press releases, preproduction information, photos and illustrations of set designs, and musical scores.

Josef and managing editor Emilie Tiongco gave me leeway to discuss what I felt were the major productions, focusing on these, recalling my own views as well as those of the critics, evaluating performances, giving the background and the significance of each play.

The text proper was not touched. A good thing, because like most writers I hate being edited, except of course for grammatical errors if any, accuracy, etc. But the TP family enriched the book by including information and photos of important plays that I missed.

While researching for the book, I interviewed three national artists: Bienvenido Lumbera and Virgilio Almario on translating the classics into Filipino, and (the late) Salvador Bernal on production design.

Dennis Marasigan and Rody Vera provided insights on lighting design and translation, respectively. And Josef himself discussed TP’s The Actors Company, which has been instrumental in developing young talent for the organization.

The title I suggested was retained, with some minor rephrasing: “Tanghalang Pilipino: Celebrating 25 Years of Philippine Theater.” And the deluxe book was beautifully designed and produced by ArtPostAsia. On the attractive cover was soprano Noemi Manikan-Gomez in a scene from the landmark zarzuela “Dalagang Bukid.”

The book was finally launched in November last year at the CCP.

I emerged from the experience more appreciative than ever of theater as art and social catalyst, of what goes on behind the scenes of a production, and the tremendous collective effort it takes to come up with a successful play.

Tanghalang Pilipino, by the way, is not the only drama group to come up with an anniversary volume. There is the Peta (Philippine Educational Theater Organization) history book, encompassing the years 1967-2007. Like TP, Peta faced problems in archiving and documentation.

“It is important to digitize all our documentation but this needs special resources, technical equipment and expertise,” Peta president CB Garrucho shared, adding: “Already our resources are strained with getting productions and workshops done season after season.”

The problem is aggravated by the fact that the arts and their documentation are not a priority in this country. And as Josef pointed out: “The funds that theater companies get for their productions are sometimes not even enough for the actual productions, so how can we expect them to spend for archiving and documentation?”

But Peta, TP and like-minded organizations plod on. “Look for the silver lining” as the nostalgic song goes.

“It’s important for artists of every generation to leave their footprint, their story,” Garrucho concludes. “Not just a record of what they did but also of what pushed them to do the kind of art they did. There’s always a social context. Fifty, a hundred years from now, a future generation of artists will look back and hopefully be guided and inspired by the work of those who came behind.”

And Josef confidently declared that the TP book “made me realize that we have accomplished something that guarantees that Tanghalang Pilipino’s first 25 years of contribution to the development of Philippine theater will always be acknowledged and remembered.”