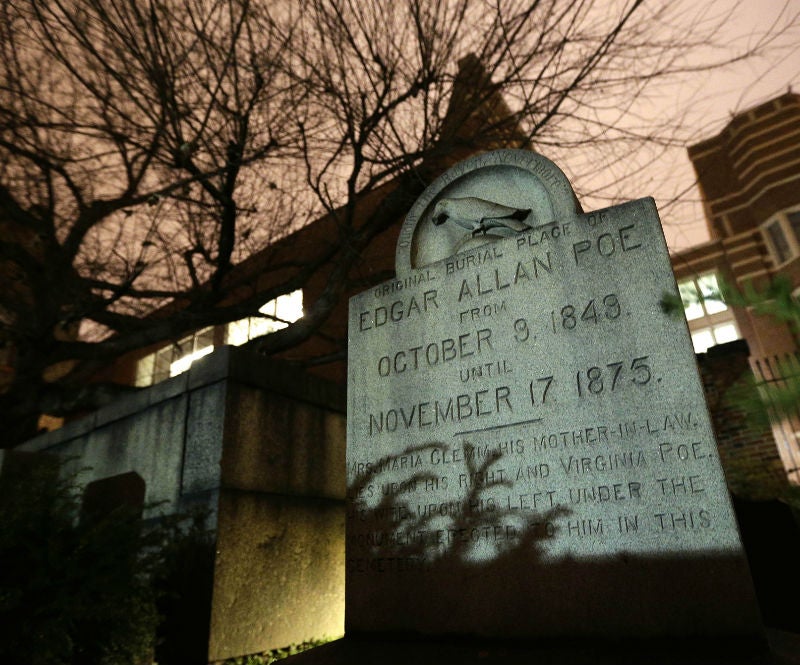 ‘ONCE UPON A MIDNIGHT DREARY…’In this Jan. 15, 2013 photo, a gravestone marking Edgar Allan Poe's original grave stands in a cemetery outside Westminster Hall in Baltimore. For decades, a mysterious man known as the Poe Toaster left three roses and an unfinished bottle of cognac at Poe’s grave every year on the legendary writer’s birthday on Jan. 19. His identity is a great modern mystery, and just as mysteriously, the tradition ended four years ago. (AP Photo/Patrick Semansky)

BALTIMORE— From the tombstone of Edgar Allan Poe, one can reach the street by taking a narrow dirt path between two tall stone mausoleums and crouching for a few steps underneath a portion of Westminster Hall.

This was a favorite getaway route for the Poe Toaster, the mysterious man in black who for decades left three roses and an unfinished bottle of Martell cognac at Poe’s grave on the birthday of the father of macabre fiction.

The tradition ended four years ago, just as mysteriously, when the visitor failed to appear.

Ahead of Poe’s 204th birthday on Saturday, the person who has overseen an annual cemetery vigil since the 1970s talked in detail about the story behind it.

Baltimore native Jeff Jerome revealed a few things, but he claims not to know the answer to the biggest question of all: Just who is or was the Poe Toaster? Jerome himself has become such a prime suspect that he repeatedly denied it, without prompting, during an interview. If he were the toaster, for example, why would he have ended the tradition, given all the publicity it brought to the nearby Poe House and Museum? Jerome was the museum’s curator before it was closed by the city last fall.

“If I was doing it,” he said, “I probably would continue it.”

He’s also keeping coy about one vital bit of trivia: the signs the visitor made at the gravesite to identify himself as the one and only Poe Toaster.

“A year, two years, my death bed, I don’t know,” Jerome said. “One of these days I’ll reveal the signs.”

Whoever the toaster is or was, he apparently never set out to make a public spectacle of himself, performing his nighttime deed for decades at Westminster Burying Ground with hardly anyone noticing.

Poe, a literary critic, poet and author of fiction, died in 1849 in Baltimore at age 40 after collapsing in a tavern.

He was known for haunting poems such as “The Raven” and dread-inducing short stories like “The Tell-Tale Heart,” ”The Fall of the House of Usher” and “The Pit and the Pendulum.” He is also credited with writing the first modern detective story, “The Murders in the Rue Morgue.”

When Jerome became a tour guide for Westminster Hall in 1976, he found a 1950 clipping that made a passing reference to roses and cognac left every year at Poe’s grave. Other members of the church backed up the story, and the caretaker who lived across the street claimed to take the cognac home and drink it every year.

On Jan. 19, 1977, Jerome said he was astonished to find the cognac and flowers at the grave.

The tradition was still alive.

The next year, he decided to wait in his car for a glimpse of the person, but he missed his chance when he had to leave for a few minutes to find a bathroom.

“I was angry at myself at that point,” Jerome said.

He said he finally spotted the toaster for the first time a couple of years later when he and four friends spent the night in the cold, dank catacombs beneath the church. He said his heart was pounding as he spotted the well-dressed figure carrying a cane, the face obscured by a derby-type hat and white scarf.

After that, Jerome got permission to watch from inside the Hall, always inviting friends, teachers or special Poe fans to join him. The public didn’t start gathering outside the gates until after 1990, when Life magazine published the only known photo of the Poe Toaster, a black-and-white image that does nothing to reveal his identity.

Around that time, Jerome publicly stated that it would be nice if the visitor performed a sign to distinguish him from impostors. The visitor obliged by starting to perform two signs at the gravesite — both so subtle that Jerome said he needed three years to pick up on them.

Also, as the crowds grew each year, Jerome realized the toaster could no longer just walk into the main gate without being spotted.

“What we ended up doing was making it easier for him to get in,” Jerome said. “And I didn’t feel the least bit guilty in deceiving the people.”

Jerome isn’t saying how he made it easier, other than uttering a cryptic “maybe” when asked if it was by leaving open the Wineholt Gate, which was used to bring in Poe’s body.

A note left by the toaster in 1993 said the “torch will be passed.” Several years later there was another note saying that the original Poe Toaster had died and that his two sons were continuing the tradition.

The sons didn’t take the tribute seriously. Jerome said they “started getting lazy with the way they dressed” and blended into the crowd by wearing winter jackets and caps instead of the traditional outfit. They left notes that marred the ritual — one referencing the Super Bowl, another dissing the French for opposing the war in Iraq.

“I promised myself that if they started leaving these goofy notes again, I wasn’t going to go along with it,” Jerome said.

The next time a note was left, Jerome said he was chagrined at the contents, as were his fellow witnesses inside the Hall. He decided to fib and say that no note was left. He declines to reveal its contents, other than to say that, in hindsight, it was a hint that the vigil was about to be nevermore.

“My personal feeling is the novelty wore off and they didn’t like fighting the crowds and trying to find ways to get in here,” Jerome said. “And being afraid someone would try to tackle them with a camera right in their faces.”

Jerome is still bothered there wasn’t a farewell note when the toaster last visited in 2009. He has held the vigil each year since then, in case the visitor returned.

Now, however, he says he might pull another all-nighter Saturday.

“It never leaves my mind how special this was, how unique, one of a kind,” Jerome said. “It had the flair, the drama attached to it. … I feel privileged. I was honored to fall into this. It’s been a part of my life.

“I’m the one that kept it going, helped the guy so he wouldn’t be tackled. How many thousands and thousands of people would give anything to be here?”