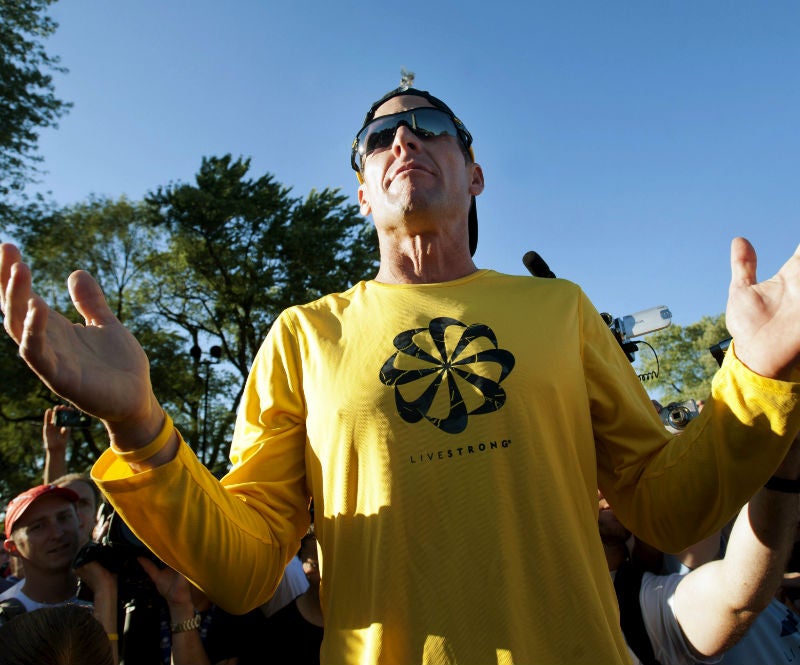 In this Aug. 29, 2012, file photo, Lance Armstrong talks to supporters prior to a run on Mont Royal Park in Montreal. Armstrong was diagnosed with cancer in 1996. Within minutes of Armstrong announcing he would step down as chairman of Livestrong, the foundation he created to support people with cancer, his longtime endorser Nike issued a statement saying it would be cutting sponsorship ties with the cyclist amid allegations of doping. Armstrong is said to be worth around $100 million, but most sponsors dropped him after USADA's scathing report—at the cost of tens of millions of dollars. AP Photo/The Canadian Press, Graham Hughes, File

Experts on deception say everyone lies

Lance Armstrong may have been branded liar and cheat of the month, but experts say he’s not as different from the rest of us as we’d like to believe.

Lying, they say, is part of the human condition, something most people do every day. And that’s reflected in the cavalcade of celebrities cowed into confession after their deceptions were exposed — from Richard Nixon’s denial of the Watergate break-in to Bill Clinton’s denial of an affair with an intern, from drug-abusing baseball players to fraudulent Wall Street executives.

“The world is rife with great liars,” says Robert Feldman, a professor of psychology at the University of Massachusetts who studies lying and deception. “Nothing about the Lance Armstrong case is shocking. We all lie every day. We live in a culture where lying is quite acceptable.”

The husband who says he is working late when he is having an affair. The worker who takes long-term disability for a serious injury, only to be found puttering around the golf course. The guy who says his car broke down because he is late for work. The dog who ate your homework.

People lie to protect their self-image,” Feldman says. “Once they’ve told a lie, they are in it, they live in it, and they justify hurting others to protect the lie because they don’t see any way out.”

People who live a deception at the level of Lance Armstrong have what Feldman calls the “liar’s advantage” because they are telling us what we want to believe.

Armstrong, he says, was unusually energetic in trying to silence the opposition and damage his critics — a trait that, in the end, might be viewed as less forgivable than his lying.

“Lying is extraordinarily common and we couldn’t get along without it,” says David Livingstone Smith, a professor of philosophy at the University of New England in Maine, and author of the book “Why We Lie.” ”It greases the wheels of society.”

Lying, Smith says, “is as automatic and unconscious as sweating.” He points out that parents teach children at an early age that “it’s OK to lie, just not to me.” Kids are told to pretend to be grateful for a Christmas gift they don’t want. And they witness their parents lying — about the tooth fairy, and the Easter Bunny and Santa Claus.

Wise people throughout history have understood that lying and deception is part of life, Smith says: “There is no commandment that says ‘thou shalt not lie,'” though there is a commandment against bearing false witness.

Dan Ariely, professor of psychology and behavioral economics at Duke University’s Fuqua School of Business, has spent years studying why people cheat. He is the author of a book, “The Honest Truth About Dishonesty: How We Lie to Everyone, Especially Ourselves.”

He doesn’t judge Lance Armstrong as being any different — or worse — than the rest of us. He cheated in a bigger way because the stakes were higher, and the system allowed him to do so. All cheaters, whether big or small, have a huge ability to rationalize their actions as they manipulate the system, Ariely says. “They say, ‘Everyone one else was doing it’ or ‘It was for a good cause.'”

In Armstrong’s case, Ariely says, the fact that he had survived cancer and won the Tour de France multiple times and become an international role model gave him a huge incentive to justify his cheating and perhaps even believe that it actually helped him in his good works.

Most people start off lying or cheating in a small way, Ariely says, and feel nervous about their deception at first, a feeling that dissipates the more they continue.

Ariely tells of another world-class cyclist he interviewed who started using performance enhancing drugs not because he wanted to win, but because he simply wanted to catch up. He felt it was justified because everyone else was doing it. He wound up enmeshed in a spiral of lies and drug use, and eventually a drug selling scandal that led to his downfall.

“He was a classic case of, ‘I will just do it once,” Ariely says. “But then it became the slippery slope where the lies got bigger and the cheating more common and in the end he got caught.”

In the 1990s, DePaulo and her colleagues monitored more than 100 people between the ages of 18 and 71 who kept a diary of all the lies they told over the course of a week. Most people, she found, lie once or twice a day, “everything from the little compliment to spare another person’s feelings to a self-serving statement that exaggerates their own importance, to trying to get a raise or a better deal on a car.”

But serious and long-term deception, DePaulo says, requires more planning — and help. She cites the case of journalist Stephen Glass, who fabricated articles for The New Republic in the 1990s, making up characters and quotes and even events. Like other great liars who managed to continue their deception for years, DePaulo says, Glass had enablers — people who wanted to believe he was as talented as he pretended to be.

Liars can only sustain those kinds of deceptions, DePaulo says, if they get others to invest — wittingly or unwittingly — in their lie.

“Your lies are going to have longer legs when people invest in you and look up to you and don’t want to hear that you may have been a lying, cheating, scum all along.”

Armstrong, she says, had something else — the power to make life miserable for those who threatened to reveal him.

Although Armstrong’s ruthlessness makes his cheating seem more extreme, he can’t simply be dismissed as one bad apple, Ariely says. And whether the cyclist will eventually find some kind of redemption is irrelevant.

Ariely believes the only good that can come out of the case is if society uses it to examine standards in everything from sports to business, to create new systems where cheating becomes completely unacceptable and a mea culpa to Oprah is not considered the road to forgiveness.

But he doesn’t hold out much hope. “Look at the bankers,” he says. “They all said sorry and nothing changed.”