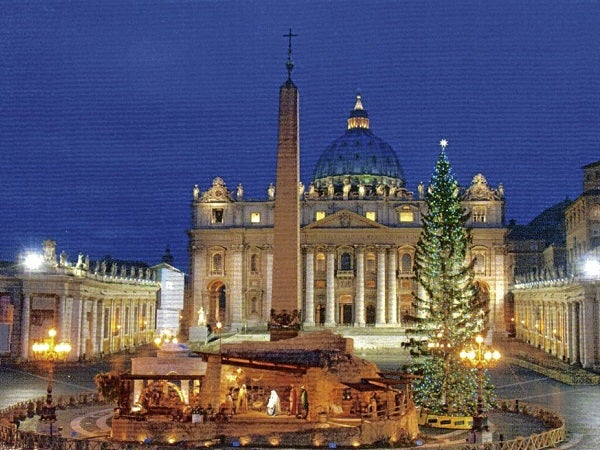 FILIPINO belen launched at St. Peter’s Square in Rome on Dec. 24, 2010, under the auspices of the Philippine Embassy to the Holy See.

An Italian book, “I Preseppi di Piazza San Pietro,” says that the Philippines has been the only country allowed to participate in the Belen (Nativity Scene) that usually graces St. Peter’s Square every Christmas. This was in 2010-2011.

The Vatican Nativity Scene was started in 1988 by Blessed John Paul II. Perhaps because the Belen has always been part of the Philippine Christmas, the Filipino Belen was launched on St. Peter’s Square on Dec. 24, 2010, upon the request of Philippine Ambassador Mercedes Tuason in connection with the 60th anniversary celebration of the diplomatic relations between the Holy See and Manila.

Filipino workers in Italy participated in the Belen scene acting as the Filipino family. The Filipino Karilagan Choir took time out from their jobs to sing. The Philippine Postal Corp. also issued a special commemorative stamp, the unveiling of which was covered by Italian and international television. The Nativity Scene, following tradition, remained at St. Peter’s Square until Feb. 2, 2011.

Josie Bantug, assistant of Ambassador Tuason, said the episode remains a source of pride for Filipinos in Rome.

The miracle of the Sto. Niño de Providencia healing oil will be 21 years old on Jan. 27. On Jan. 27, 1992, the two-foot image of the Sto. Niño in the living room of Corazon Gonzales reportedly started to move around the room spouting oil from its body.

Gonzales’ daughter, Lorna, called the nuns of the Order of St. Pius X living in Philamlife Village to come and help. Towels used for wiping the floor where the oil landed were used afterward on sick people. They got well.

The Sto. Niño will be brought out of the chapel at 7 a.m. and enthroned on an altar  built on 65 Pijuan St. in BF Resort Village.

Msgr. Benedicto Aquino, parish priest of  Mary, Mother of the Church Parish, will say the Thanksgiving Mass at 8 a.m., while Fr. Gerard Deveza will hold the Healing Mass at 10 a.m.

There will be a concelebrated Mass at 3 p.m. at Mary, Mother of the Church led by Msgr. Aquino. Healing priest Fr. Nelson Osorio is a concelebrant.

Devotees of the Virgin of the Poor all over the world celebrated the 80th anniversary of the apparition in Banneux, Belgium, on Jan. 15.

In Barangay Bigaa in Silang, Cavite, the Sisters of Mary held Masses in the chapel dedicated to her where the remains of the order’s founder, Msgr. Schwarz, were buried.

Recently, Couples for Christ (CFC) went on a Marian Pilgrimage to Lourdes and Fatima with 70 pilgrims under Adams Travel. They held a groundbreaking ceremony for a grotto that was built beside the chapel of Our Lady of Banneux in Belgium. This was headed by Dr. Joe Yamamoto, CFC overseer, with wife Dr. Mila Yamamoto. Also with them was Msgr. Allen Aganon, CFC spiritual adviser.

The relics of St. Therese of the Child Jesus will arrive in Ramos, Tarlac, on Jan 23.  Fr. Archie Cortez and the monks will lead in the veneration of the relics. Domingo “Kuya D” Tolentino will dress up the saint, which was donated by US-based Norma Riquerme Austin in 2000. The relics will be moved to the Archdiocese of San Fernando afterward.

College of the Holy Spirit homecoming

The College of the Holy Spirit (CHS) in Mendiola, Manila, is holding its 100th foundation anniversary on Feb. 2 and 3.  Registration is on Feb. 22, 9 a.m.

CHS president Dr. Felina Young will give the welcome remarks, while alumnae president Sabsy Palanca will deliver the opening remarks.

Centennial Mass will be at 2 p.m. at the auditorium, after which awards will be given to 100 outstanding alumni.

The procession of 250 carrozas bearing the Sto. Niño will  leave the Philtrade grounds on Jan. 27  at 3 p.m. going to Roxas Boulevard toward Quirino Grandstand. Organizers are the members of the Congregacion del Santissimo Nombre del Niño Jesus.

Since the Varsitarian is technically speaking the oldest Catholic paper in the country (its first issue came out on Jan. 16, 1928), and it is marking its 85th year on the Year of the Faith, the homecoming will pay tribute to alumni priests, religious and lay people who have worked in the service of the Catholic Church.

Former Varsitarian staffers are invited to join the reunion. Preregistration is required.

Thirty-seven seminarians who graduated from their theology studies at the UST Central Seminary 37 years ago will hold their batch reunion in Sorsogon on Jan. 29-31.

A member of the batch, Fr. Ed Lleva of the Diocese of Caloocan, recalled the good times:

“We were under the guidance and supervision of the great UST Central Seminary rector, our beloved father, the late Fr. Jaime N. Boquiren, O.P.

“All of us were ordained priests in our respective dioceses and religious orders. Most were diocesan priests, the rest were religious: three Dominicans (OP), two Congregation of Mary (CM), two Order of St. Joseph (OSJ) and one from Nigeria, now Msgr. Benedict E. Efapo.

“According to the history of the UST seminary, this class has the biggest number of ordained seminarians up to now. We already have two bishops, Bishop Jose Fuerte Advincula Jr of the Diocese of San Carlos and Bishop Rodolfo Fontiveros Beltran of the Diocese of Lagawe. The religious priests are now heads of their religious orders.”

Msgr. Frank Monje, the episcopal vicar of Sorsogon and parish priest of St. Anthony of Padua, Gubat, Sorsogon, is hosting the Batch ’76 Reunion on Jan. 29-31 at Villa Isabel Hotel, Sorsogon.

A tour of Rizal Beach on Bulusan Lake is set on Jan. 30, with a lunch and dip at San Benon Hot Spring in Irosin, Sorsogon.

A concelebrated Mass will be held, led by Sorsogon Bishop Arturo M. Bastes, SVD. Dinner and socialization will follow with the clergy of the Sorsogon.