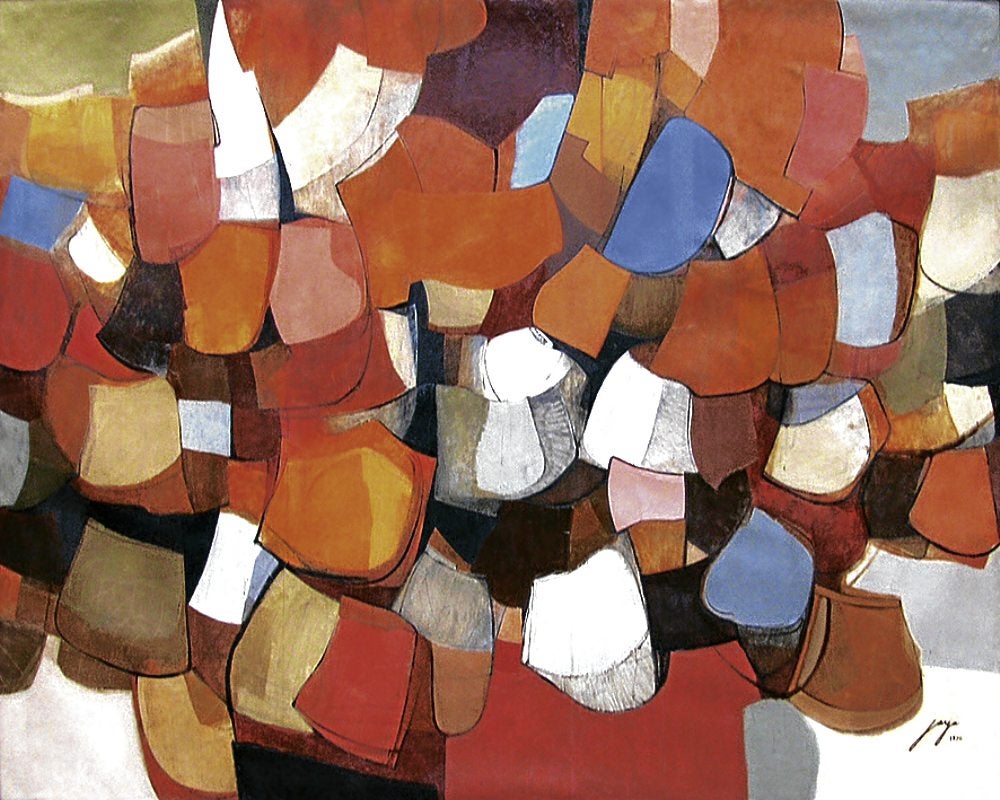 National Artist José Joya had a peculiar way of greeting each New Year.  On New Year’s eve, Peping, as he was known to family and friends,  would lock himself in his studio, away from the charivari and excess of the holidays, to work on a painting and would emerge only after the revelries had the died down.

“I guess he loved his art so much,” recalls his sister, Josie Joya Baldivino, “that he didn’t want to be caught doing anything else during those precious occasions.”

Art, indeed, was the love of Joya’s life, the object of a lifelong romance that spanned more than five decades beginning in the early 1950s.

Born in 1931, Joya came of age during an era of transition and ferment.  Victorio Edades had, by then, already planted the seeds of modernism in Philippine art, but the old vanguards of classicism, among them Fernando Amorsolo and Guillermo Tolentino, maintained their stronghold in the discourse and practice of Philippine art.

The logic of visible reality was then the dominant philosophical basis for art-making and figurative representation its only acceptable form of expression.

Although schooled in this classical tradition, Joya possessed vision even early on as a Fine Arts major at the University of the Philippines.  He imagined worlds beyond Manila’s war-ravaged streets and was seduced by the carefree temperament and expressions of the emerging artistic movements in the west.

Influenced by the New York school of the 1950s, he would soon develop a unique, gestural style of pure abstraction that would, in the realm of Philippine art, constitute a profound paradigm shift whose impact and influence reaches to this day.  For art patrons accustomed to idyllic renderings of the Philippine countryside, Joya’s kinetic splatters of golden paint were surely confounding, if not outright scandalous.

In 2003, eight years after his death, Joya was conferred the National Artist Award in recognition of his  pioneering efforts to evolve Filipino abstract art. On the occasion of the 10th anniversary of his inclusion in the Order of National Artists, Rockwell Land Corporation and Gallery Big will stage “Joya: A Modern Native,” on a limited run, on Jan. 26-27, at the Rockwell Tent in Makati.

On view at the exhibit are two large murals painted in the 1970s, the period regarded as the highest point in Joya’s career.  “Lanterns of Enlightenment” and “Mariveles” are impressive, large-scale renditions of the profound interplay between shapes and tones as both formal and metaphorical elements of technique and composition.  In both these works, Joya’s style exhibits a contemplative countenance that reflects eastern philosophical traditions.

Also featured will be a number of travel sketches from Joya’s many trips overseas.  Drawn on-the-spot using pencil, charcoal or pastel on drawing paper, these sketches constitute a virtual diary of  the globe-trotting Joya.

Baldovino, who accompanied his brother in many of those travels, recalls a trip they made in Hong Kong:  “Our host was so amazed at how good his drawings were and how fast he could draw them.  It took him only 10-15 minutes to complete a detailed on-the-spot drawing of the different scenes of Hong Kong, finishing over a hundred works in about a week!”

In his travel sketches,  Joya transforms the strange into the familiar, bridges the distance between time and space, and affords viewers his vision of other worlds.  As such, they are works that engage viewers to embark on their own journeys into the realm of the imagination.

Joya’s enabling spirit transcended his art.  He served as dean of the UP School of Fine Arts from 1970 to 1978, modernized the UP curriculum, established scholarships, and organized art programs and workshops all over the country.

As a leading voice in the Philippine art community, Joya also headed various government and private initiatives on the arts and led Filipino delegations to international exhibitions.

“Joya’s greatest legacy was his art,” says Baldovino, “and how it has empowered artists to create their own unique styles.  It helped change how Filipinos were perceived abroad, no longer just as followers but instead as trailblazers in art.”

Today, Joya continues to serve as an inspiration for a new generation of young Filipino artists.  “Despite the fact that contemporary art today leans more toward figurative expressionism, new forms of abstract expressions are still being developed,” says Jon Sy, owner of Gallery Big and curator of the Joya exhibit.

Among these promising artists, he notes, are Max Balatbat, who won the Il Magnifico Prize at the 2009 Florence Biennale, Lindslee and Camille Ver.  The annual ManilArt fair, along with newly opened galleries, also serve as breeding ground for abstract expression and appreciation.

To showcase Joya’s lasting influence on Philippine art, several artists have also been invited to pay tribute to the National Artist.  Also featured in the exhibit are works by sculptors Ramon Orlina and Michael Cacnio, and paintings by, among other artists,  Buen Abrigo and Risa Recio.

Orlina’s “Sensuous Eve” and Cacnio’s “Mother & Child” resonate with the temperament of Joya’s sketches during the latter part of his career.

Abrigo’s “Outer Intercourse” is an impressive 12-ft mural that features Joya himself among other luminaries against a surreal backdrop of cityscapes and cartoon figures.

Recio’s “Roger’s Park No. 8” channels Joya’s prize-winning “Space Transfiguration” from 1959 and brings it to the 21st century.

As an artist who pioneered abstraction, Joya imagined worlds of possibility beyond the confines of tradition.  In doing so, he paved the way for new ways of thinking about art and its practices.  The Rockwell exhibit is not only a fitting tribute to a celebrated master but a showcase of his vision of a world full of possibilities.