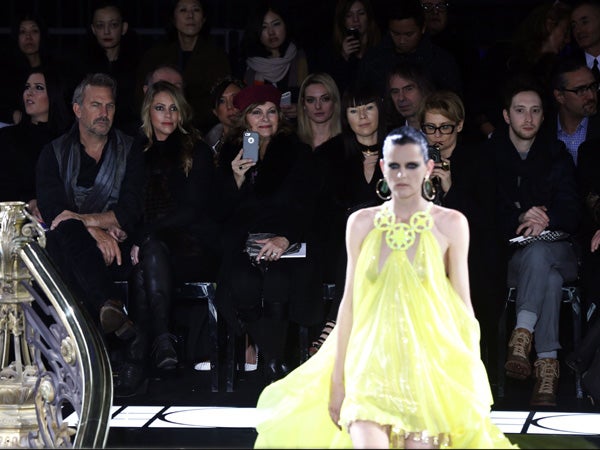 PARIS – The fashion crowd battled the elements in Paris Sunday as snow covered the city on the last day of the menswear shows.

Spring-summer 2013 couture was due to pick up the baton on Monday although an early offering from Versace was scheduled for later Sunday.

A combination of sportswear and tailoring dominated Dutch designer Lucas Ossendrijver and artistic director Alber Elbaz’s Lanvin winter 2013 collection, in keeping with many of the week’s other shows.

Coats were loose-fitting and soft-shouldered or belted, quilted and body-hugging.

Ties were narrow worn with sheer shirts in orange and lilac while footwear featured calf-high boots and sneakers.

American rapper Kanye West was among hundreds attending the show at Paris’s National School of Fine Arts as snow fell outside, blanketing Paris in a rare covering.

Japanese designer Rynshu served up a heavy dose of glamour with a collection of mostly black evening wear.

Models in slinky, sparkling pieces strode out onto red carpet in the opulent surroundings of a Place de Vendome hotel ballroom.

Tight fitting suits were covered in sequins, while for the more adventurous there were skirts consisting of baggy trousers with a pleated middle section.

Prints ranged from magnified houndstooth on shirting to hazy marbling on coats and jackets.

For footwear, there was another reworking of the Chelsea boot with a zip back and a trainer sole.

An abstract kaleidoscopic print inspired by a painting by Willem de Kooning featured in a number of pieces and oversized hooded coats and trench coats blended arty and military influences in clothes suited to “creative” Parisian minds.

Some 80 shows seen since Wednesday were to draw to a close later Sunday with the eagerly awaited first Saint Laurent collection by Hedi Slimane, famed for his super-tight, skinny tailoring.

Four days of couture shows then begin in earnest on Monday and run until Thursday.

Haute couture exists only in Paris, where it is a legally protected appellation subject to strict criteria such as the amount of work carried out by hand, the limited number of pieces and the size of a house’s workforce.