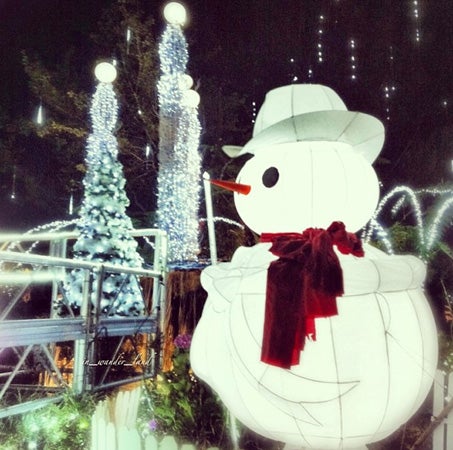 MANILA, Philippines – A white Christmas is far from a Filipino Christmas, but there was a snowman display at Manor Hotel in Baguio last Christmas that caught Alice Pascual’s fancy.

“I wanted others to see how fantastic Manor Hotel’s Christmas Decorations were.  It was all white! It was foggy and drizzling during that time when I took it, but the view was wonderful!” said the 27-year-old nurse associate from Tarlac.

The holidays may be over, but the weather was only starting to get more chill, especially in Baguio City.

Her photo of snowman display landed at INQUIRER.net’s Paskong Pinoy special site, which made her “really surprised” when she found out her photo was featured on the website.

“I even thought it’s not applicable for it as snowman doesn’t portray Paskong Pinoy,” she told INQUIRER.net.

“I was really surprised and honored that Igersmanila and INQUIRER.net appreciated the photo,” she added.

Pascual, who uses an IPhone 4s in taking pictures, said she isn’t seriously into photography, and sees it only as a hobby.

“I just started taking snaps in 2011 while I was in the UK, because most of the things in my surroundings were just so beautiful! I don’t really have any specific subject, but lately I love minimalistic themes.  But I would really love to take plenty of sunrise/sunset shots if given the chance,” she said.

Last Christmas was quite “special” for Pascual, who claims it was her first time to spend the holidays after three years of working in England as a nurse.

“My worst Christmas was in 2009, when I celebrated Noche Buena on my own, wasn’t able to go to church and had to spend half day at work with our patients,” she said.

The rest are considered the best, she said.

For Pascual, Christmas in the Philippines is unique because it centers on Jesus Christ.

“It’s having Jesus as the center of the celebration.  For most of us, if not all, Christmas won’t be complete without going to church.  There’s no greater way to celebrate Christmas than going to church with the whole family,” she said.

She said she spends the usual “noche buena” and “money-giving” tradition at home with her family during Christmas.

In the Philippines, Christmas has earned the reputation of being the longest, as early as September until January.