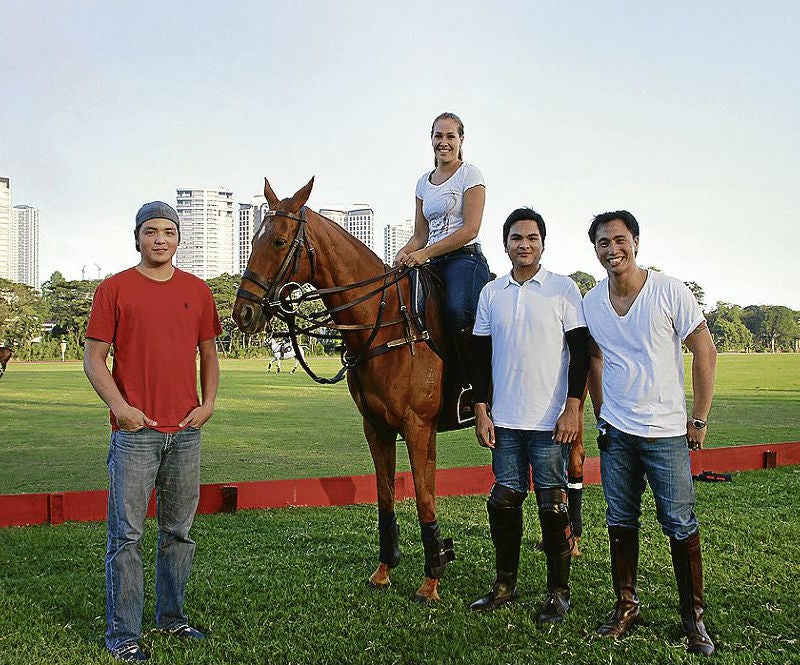 During the polo season, the players make their dashing runs and glorious strokes on various polo fields around the south of Metro Manila. The numbers of players participating are growing and more women are joining this male-dominated sports.

One reason for polo’s longevity is family succession. Many polo players were born into families that are into equestrian sports. They’ve come to love polo not only because of the speed and horsemanship but also because of the dynamics of teamwork.

Paola Zobel, 28, comes from a lineage of polo players even way before her late grandfather, tycoon Enrique Zobel, was the highest goaler in the country.   Her doting grandfather would make her sit on a horse before she could even walk.

“I was barely a year old when my grandfather bought us miniature ponies from Argentina,” recalls Zobel. “He wanted all of us to ride. He would come to my show jumping shows. The fact that we liked riding made him really happy.”

At eight years old, she took up riding lessons at Olympian Denise Cojuangco’s riding school. She also took lessons at an exclusive club with such mentors as Mitos Pacis Belofsky, Clarafe Santos Lanza and her son, the most bemedalled Filipino equestrian, Jones.

Through the years, Zobel specialized in show jumping and has participated with the Philippine team in the Southeast Asian Games. While studying in Europe, this sportswoman would do the rounds of competitions and horse shows. She  averaged 48 to 52 events in a year and would come home briefly for Christmas.

After graduation, the young Zobel was tasked to help oversee the family-owned Ayala España S.A., the holding company for all their businesses in Spain.

“When I was into equestrian sports, there was a show every weekend. But when you’re new to a job, you can’t say you have to take Friday off because of a show,” she says.

“It was difficult to compete at that level and to work at the same time. I manage the operations in Spain when my dad is not around,” explains Zobel who is a director in the company. Her father, Iñigo Zobel, is one of the country’s prominent but low-key business leaders and a well-respected polo patron. Moreover, she set up a restaurant named Asador Cancha, which caters to a privileged clientele, in an exclusive polo estate

With her achievements in equestrian sports, she felt it was time to “move on.”

Three years ago, she took up polo, a sport played by her father and brother. While show jumping was an individual sport, Zobel had to adjust to playing with a team and with mostly male players.

“The advantage was that I knew how to ride, which is the hardest thing. If you don’t know how to ride, you’ll never become a good polo player because you have to feel safe and comfortable on the horse.”

For cross training, she plays tennis, does daily weight training, yoga, Pilates and running. “If you want to be fast, agile and strong, you  do what it takes,” says Zobel. “As much as it looks like the horse is doing the work, polo takes the wind out of you. If you’re not fit, it’s not so easy. Your back and every part of you hurt. I fell yesterday, but if I weren’t fit, it could have been worse.”

Zobel admits she hasn’t played enough polo although she joins some tournaments in Spain. Yet, polo keeps her busy when she’s vacationing in Manila.

“I like to have fun. I don’t think I’ll be competitive as I was when I was show jumping.”

Ultimately, she puts the same dedication to her sport as she would to her businesses.

Adrian Christopher Garcia, 20, is single-minded about pursuing a career in polo. The son of polo player Antonio Garcia and model Carolyn Masibay, the younger Garcia played in Thailand, California, Chicago and the Midwest right after he graduated from Ateneo High School.

He looks up to his brother, Anthony, a five-goaler whom he describes as “one of the best players in Asia.”

“Anthony played with the World Cup team in the States. He taught me all the things I needed to know,” he says. Garcia has been mounting horses since he was barely three years old. He learned to hit the ball when he was 10 years old and started competing at 13.

His most unforgettable experience was when his father and his two brothers played against another family, also composed of a father and his three sons. “As a professional, I’ll never forget winning the eight goal at the Governor’s Cup in Des Moines, Iowa. It took weeks of of hard work and the game was good.”

Asked his handicap, he sheepishly replied, “Two.” Still, it’s higher than most polo players in Manila. “I’ll get there,” he says, referring to the higher statistics of world-class professionals.

When they come home to the Philippines to play for the polo season, the Garcia brothers are sponsored by sportsman Mikee Romero.

Another second-generation player, Stefano Juban, 24, takes after his father, Lope Juban Jr., in business and in sports. His father heads Philippine Films Inc. which has line produced such classics as “Apocalypse Now” and “Born on the Fourth of July.” For “Bourne Legacy,” the younger Juban was an assistant location manager. The father says his son has the advantage of starting young. While the older Juban was practicing polo, he bought his then six-year-old son a pony.  Growing up, Juban watched every polo match intently. At 15,  he started playing in tournaments.

He adds that riding has motivated him to be fit. When he was entering his teens, he weighed 210 lbs. Today at nearly 5’9” he weighs 170 lbs. “People think it’s the horse that does the work. When you get on top of the horse, it’s total physical and mental involvement.”

His best game was the Fila Cup in 2009. His team wasn’t expected to get a trophy but he did his best to help his teammates win.

“I’ve played in basketball teams in school but polo is more thrilling. There’s adrenaline rush. They say that once you play, it’s as if a bug has bitten you and you can’t stop.”

Juan Ramon Santos Lanza Jr., 39, “Jones” to many, says in modesty that he has lost count of his gold medals after a career in show jumping. His mother taught him to ride when he was six years old. “My family, the Santoses are into racing, riding and polo,” he adds.  His cousins—Jimbo Dulay, Jay de Jesus, Miguel Camara, Dinky, Dino and Dondi Santos and Ray del Rosario—are polo players.

“Although cars and horses offer the thrill of speed, working with an animal is more challenging. The engine of a car is inanimate. You have to get along with the horse so it can do what you want on the field. That’s what I love about polo.”

His most memorable game was being part of Iñigo Zobel’s team during the Jacobo Zobel Cup in Calatagan. “I usually play in the low goal. They put me up on the high goal, the main game. I felt proud to be in Mr. Zobel’s team. He trusted me to be on his team.”

Raymond del Rosario, 28, got into polo as fluke. In 2010, he spent the holidays at the Boracay getaway of his then fiancée Thalassa Elizalde. He suddenly got a call from his father, Roberto del Rosario, a fishing magnate. Fascinated by a polo practice, his father urged  him to take up the sport.

Without any knowledge of horses, he enrolled at the California Polo Club while he was studying at Pepperdine University in Malibu, California.

After the basic horse-riding lessons, he was still clueless about  the polo fundamentals. “When they gave me a mallet, I asked, ‘What do I do?’” He had no idea it was used for hitting the ball. When he asked how he could go forward, he was told to kick. Del Rosario  said in jest that he wasn’t sure if he should kick the horse or the trainer holding the horse.

“It’s been love since then,” he says.

After riding for three weeks, his coach told him to get off the  horse and work in the barn. Given a shovel, he asked, “What has this got to do with polo?” The coach told him that if he cleaned the horse poop, he would decide if Del Rosario could ride again. He realized that aside from the sport, one had to know the work of a groom.

A turning point came when he moved in with the Sheldons, a prominent polo-playing family. Del Rosario was trained in indoor polo, which entailed a smaller field indoors, three players instead of four and a different ball. Jared Sheldon, the son, taught him outdoor polo.

His most unforgettable experience was getting ranked after playing polo for a year. “It was March 2011 in the El Dorado finals. I earned my handicap.”

Del Rosario came home to help in the family business, Irma Fishing, in Malabon and is president of a new retail center in Quezon City called Fisher Mall.

Now on his second season in the Philippines, he’s still adjusting to outdoor polo. “I’m learning patience, not to be ball hungry. I wait for the proper timing before getting into the groove of things.”

Beyond the sport, he cherishes polo for the camaraderie. “A group of good people makes the difference.”