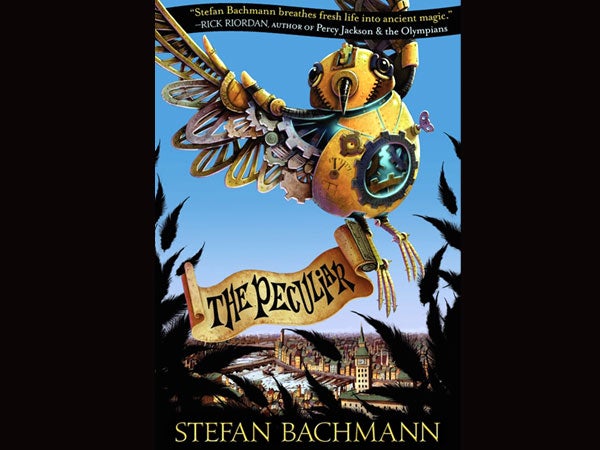 Zurich—Stefan Bachmann is only 19, but his darkly mysterious debut novel set in a parallel world of faeries, goblins and child snatchers has already earned him comparisons to J.K. Rowling, Dickens and Dostoyevsky.

“I didn’t realize it would get published,” Bachmann told AFP, tapping the yellow, mechanical bird depicted on the cover of “The Peculiar”, which first hit shelves in the United States last September.

“I just really, really hoped something would happen with it,” the lanky, blond Swiss-American with rectangular steel-rimmed glasses added with boyish enthusiasm.

And something certainly did. After spending a year trying to find a literary agent, the book he began writing in his bedroom at 16 was suddenly the object of a publisher bidding-war before it was snapped up by the US publishing giant Harper Collins.

With a first print of 100,000 copies and rights sold in seven languages besides the original English, his adventure set in a bleak version of Victorian England where faeries and humans unwillingly live side by side has met rosy reviews, including from the Los Angeles Times which dubbed him an “unusually gifted young writer”.

His second book, “The Whatnot”— which picks up from the first book’s cliffhanger ending and completes its harrowing tale of two young peculiars, half-human, half-faery changelings despised by both sides— is set to be published in September. Both are what is known as middle-grade fiction, targeting the pre-teen age bracket.

“Don’t get yourself noticed and you won’t get yourself hanged”: that is a motto Bachmann’s hero, a peculiar named Bartholomew Kettle, leaves to one side as he is swept into a cataclysmic adventure which sees other peculiar children snatched and killed, their insides drained and their skin left floating in the Thames.

“I know it’s dark,” Bachmann admitted, cradling a cup of hot tea in his hands in a crowded book store cafe in the heart of Zurich.

“I’m not sure why. I think I just really liked scary stories when I was a kid. I wanted to write a story that I would like to read,” he said.

‘A long road to success’

He said he decided early on that his book needed to be in the “steampunk” tradition— a sub-genre of science fiction inspired by 19th century Western civilization and typically featuring steam-powered machinery—and that it be set in his favorite period: Victorian England.

Bachmann, who has lived most of his life on the outskirts of Switzerland’s largest city, was home-schooled by his American mother, who he said had always encouraged him to read all different kinds of books.

He lists Charles Dickens, J.R.R. Tolkien’s “The Lord of the Rings” and C.S. Lewis’ “The Chronicles of Narnia” among his favorites.

“I really like it when writers can make you feel like you’re in this whole other world,” he said.

It may sound strange coming from a 19-year-old, but the way Bachmann tells it, his was a long road to success.

“This is my first published book, but I wrote three before it,” he confided. He began his first book aged just 11.

“But they were definitely 11- to 12-year-old books. They were not very good,” he laughed, adding that he had not tried to get any of his youthful works published.

It was also at 11 that Bachmann began pursuing his second passion in life, when he was enrolled in the Zurich Conservatory.

Now majoring in composition, he hopes to one day also be a film composer, he said, “but that is kind of like writing, a lot of people want to break in… I don’t know if I will have the same luck twice.”

But as he works on a third book and continues to dash around to promote “The Peculiar”, he says his teachers are not always understanding.

“They are intense maestros who are not really impressed by the hype. To them, music is the most important thing ever, and everything else is peripheral.”

Asked if he sometimes wishes he had more time to just be a regular teenager, he shrugged: “You win some, you lose some.”

“I do go out with my friends sometimes, but a lot of times I have to say, no, sorry, I have a deadline,” he said.

“But then you get to go on book tours and go to New York and make new friends. It’s worth it.”