Their dream house is an ‘open’ house | Lifestyle.INQ ❮ ❯ 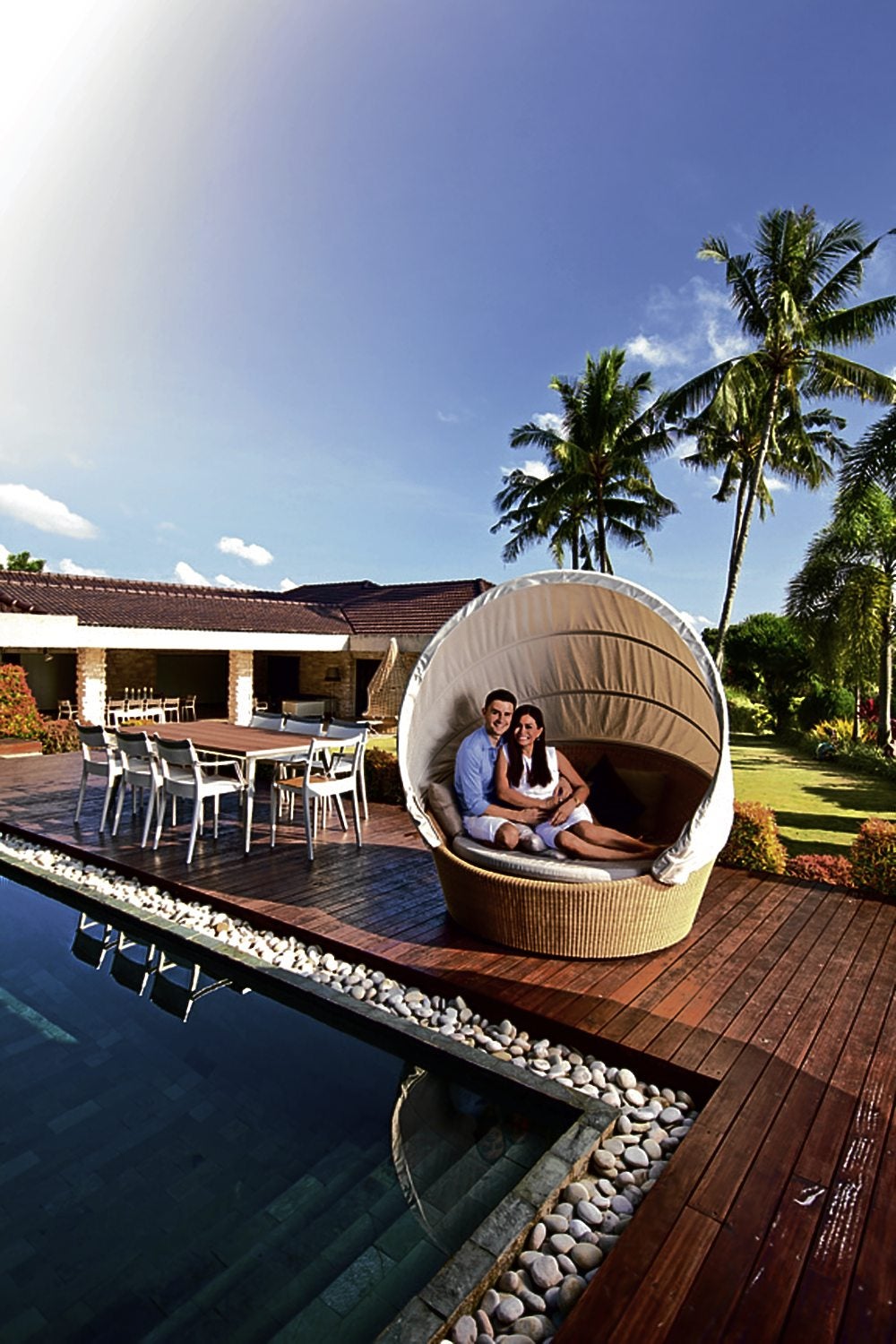 Their dream house is an ‘open’ house

Decorating their home in a Cebu subdivision, businessman Hervé Lampert, 36, and his Cebuana wife Marites “Tess” Gonzales, 40, live up to the precepts of Dedon, the global outdoor furniture company which the Frenchman runs.

“We’re practically living in the outdoors,” declares Lampert, Dedon CEO. The house was built around a huge lanai where the family usually gathers. With huge openings and large windows opening to garden views, the sprawling home has ample light and cross-ventilation.

“We don’t use the air-conditioning so much because the house is not fully enclosed. You feel the outdoors. This is what we do with Dedon,” he says.

The lanai is also the biggest space in the house, where one can enjoy the various moods of the day as the sunlight shifts. Depths are created by the play of light and shadow, and the lights in the garden at night create their own drama.

When the couple made an ocular visit to the property, Lampert saw its potential right away. He was attracted by the sights and sounds of nature—the flitting butterflies, the symphony of birds and the sweeping panorama.

“We bought the house because it was surrounded by the mountains. At the back, you see the jungle, and from the side of the property you look over the city and the sea,” he says. The 450-square-meter bungalow was originally in ’80s style, with dark wood and Mactan stone. The stones were finely chiseled into blocks, looking their best when composed like vintage stone walls.

The roof was changed to Spanish tiles, and some carved Indian doors were installed for accent. The paint was scraped to reveal the patina of rich hardwood. The master bathroom was transformed into a Zen garden, where Lampert enjoys the shower al fresco.

Tess, an inveterate cook, expanded the kitchen and installed the Mobel House modular system. The vertical layout facilitated the flow of work, from preparation to service. She adds, “I wanted a big kitchen so that the children can run around.” The house, like its furniture pieces, is designed for casual living.

Tess, a nursing graduate, found her way to product development, creating antique reproductions for the American market for Inmark USA. When the management saw her eye for detail and sharp aesthetic sense, she was promoted to assistant interior designer.

She then ventured into her own business, subcontracting for Dedon with 120 employees under her. When she got married, Tess decided to become a full-time domestic diva, although she also found the time to decorate Dedon’s resort in Siargao.

In their home, Tess slowly introduced leather sofas and tufted armchairs. The TV room is an ode to mid-20th-century design with a rare Le Corbusier chaise longue in cream leather that sets off the striking red leather sofa and the black-and-white photographs of New York scenes.

Filled with mementoes from the Lamperts’ trips around Asia, wall alcoves are interesting architectural details that also hold keepsakes. Tess incorporates references to her husband’s culture—rococo carved mirror frames and chandeliers that lend the Parisienne feel.

Lampert hails from the farmlands of Alsace-Lorraine in France. He met the German-Belgian chairperson of Dedon, Bobby Dekeyser, through the latter’s mother. “Bobby used the idea of plastic extruded fiber to be woven into a frame because it could withstand weather conditions,” he says.

When Lampert worked for Dekeyser in the Dedon factory in Germany, they became good friends. Both eventually made business trips to Asia to meet suppliers and to oversee quality control of the output of their subcontractors.

In 2000, weary of some shoddy practices in China and Thailand, Lampert and Dekeyser set up a factory in Cebu, where the original Dedon chair was made in 1993.

As proof of Dedon’s success, other manufacturers have knocked off its designs. Dedon files 180-250 cases of copyright infringement every year, most of which come from China. “The best part is our innovation with new technology which is impossible to copy.”

Lampert cites Massaud’s SeaX which accentuates a conversation corner in the lanai. Inspired by the sleek racing sailboats, the foldable chair is made elegant with its aluminum frame, veneer armrests and hand-stitched Austrian leather upholstery. The mold of the frame itself costs nearly half a million euros to produce.

Lampert adds that personalization is a lifestyle trend, be it in Mini Coopers or computers.  This is reflected in the Play with Dedon by Starck and Quitllet chairs in the lanai dining area and deck. French icon Philippe Starck liked the concept of designing outdoor furniture where the user can customize the finish and upholstery.

“The idea is the consumer can have fun with Dedon and Starck to personalize the chair. On that frame you can attach an armrest to create an armchair, or you can leave it out to create a side chair with no arms. The armrest can come in different colors of plastic or in polished aluminum. Then you can play with the choice of seats—plastic, woven, leather or wood. The customer can choose the different configurations. They can have their own personality chairs,” he explains.

“As people want to customize and express their personality, they can make their own product and recognize themselves in the product that they have. On our end, it’s selling the dream.”

The Lamperts have Starck-designed chairs in neutral colors to blend with the warm tones of the house. In the lanai, Starck also designed a lampshade, the texture of which took thousands of knots to create. Baring his sense of humor, he also designed a table which mimics bamboo wooden slats; this is in the poolside.

“It looks and smells like bamboo, but it’s made with crushed bamboo powder, a recycled material, mixed in a dye with polyethylene to withstand the weather,” says Lampert.

He points out that sustainability is an important attribute in design. Dedon’s basic material is polyethylene, the most common plastic material, which is recyclable.

“In our facility in Germany, everything is used to make a product. There is no wastage. When the materials come to Cebu, there may be three percent waste when we make a chair. It then goes to the segregation facility, then sent to another manufacturer to shred the materials and create another material. This means, it doesn’t go to any landfill. Coming from the farm, we have been doing this from the start. We live in nature in harmony.”

But beyond design is the core of the close-knit family life—Lampert’s fondness for children and Tess’ devotion to keeping the family together.       When he’s not traveling for business or puttering around the factory, Lampert enjoys staying in the lanai where he can check on his family. He can immediately spot his teenage children in the entertainment wing, his young daughters in their bedroom in the opposite wing, and Tess in the kitchen which is behind the lanai.

“The openness of this house keeps the family together,” says Lampert.