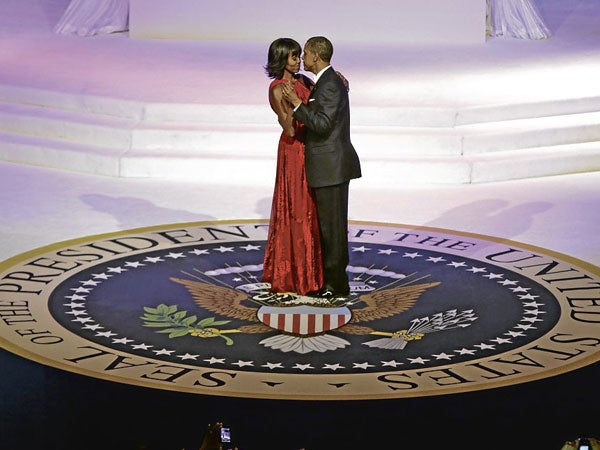 THEY COULD HAVE DANCED ALL NIGHT US President Barack Obama, who earlier took his oath of office for a second four-year term, dances with wife Michelle at the Commander in Chief Inaugural Ball during the 57th Presidential Inauguration in Washington, DC, on Monday. AP

WASHINGTON—Michelle Obama made it a fashion tradition Monday night, wearing a custom-made Jason Wu gown to the inaugural balls. The ruby-colored dress was a follow-up to the white gown Wu made for her four years ago when she was new to Washington, the pomp and circumstance, and the fashion press.

She now emerged in velvet and chiffon as a bona fide trendsetter.

“I can’t believe it. It’s crazy,” said Wu, reached at his Manhattan studio as he was trying to share the news with his parents in Taiwan. “To have done it once was already the experience of my life. To have a second time is tremendous,” he said.

US President Barack Obama also struck a similar style chord to his first-term inaugural balls: He wore a white tie with his tuxedo.

The red halter dress was the only one Wu, who went from fashion insider to household name on this night in 2009, submitted for Michelle Obama’s consideration. He collaborated with jeweler Kimberly McDonald on the jeweled neckline.

“For this occasion, it had to be real diamonds,” said Wu.

Earlier in the day, the first family headed out to the public oath-taking on the steps of the Capitol with Michelle leading a very coordinated fashion parade in a navy-silk, checkered-patterned coat and dress by Thom Browne that were inspired by a menswear necktie.

The rest of Michelle Obama’s inauguration day outfit included a belt and gloves from J. Crew, necklace by Cathy Waterman and a cardigan by Reed Krakoff, whose ensemble she also wore to Sunday’s intimate, indoor swearing-in ceremony.

The president wore a blue tie with his white shirt, dark suit and overcoat. Malia Obama had on a plum-colored J. Crew coat with the hemline of an electric-blue dress peeking out and a burgundy-colored scarf, and her younger sister Sasha had on a Kate Spade coat and dress in a similar purple shade.

Simon Collins, dean of the school of fashion at Parsons The New School for Design in New York, said the Obamas dressed in their typical fashion: One that shows pride in their appearance.

“They are a stylish couple and their children look fabulous … They show it’s good to dress up, take pride in how you look … It’s a wonderful example for America and the rest of the world,” he said.

Collins also noted that the Obamas seem to understand that the fashion industry is a driving force in the US economy and that its lobby is a powerful one. They don’t treat fashion frivolously, he observed.

Michelle Obama’s outfit and accompanying accessories will go to the National Archives at the end of the inaugural festivities.

At a monster inaugural ball on Monday night featuring some of the biggest stars in popular music today, the first couple, like the king and queen of a high school prom, flashed awkward smiles as they held each other closely and swayed to Jennifer Hudson covering Al Green’s 1972 soul classic “Let’s Stay Together.”

The black-tie and sequined crowd of up to 40,000 in the dark belly of Washington’s Convention Center downtown cheered wildly, raising their hands as one to capture the moment on their digital cameras and smartphones.

“Just danced to  ‘Let’s Stay Together’ with the love of my life and the president of the United States,” Michelle said via Twitter right after stepping off the stage. “I’m so proud of Barack.”

In contrast to the 10 official inaugural balls that followed his historic inauguration four years ago as the first black US president, Obama favored one jumbo soiree this time—open to anyone fast enough to snap up the $60 tickets online—plus a smaller affair for the Armed Forces by invitation only.

The Obamas, running late, had yet to arrive at the convention center when Alicia Keys got the party started by sitting at an electric piano and reworking the title track of her latest album “Girl on Fire.”

“He’s president and he’s on fire … Ohhhh-bama’s on fire,” she sang. She then went on to affectionately rejig one verse: “Everybody knows Michelle’s his girl/together they run the world.” Reports from AP and AFP