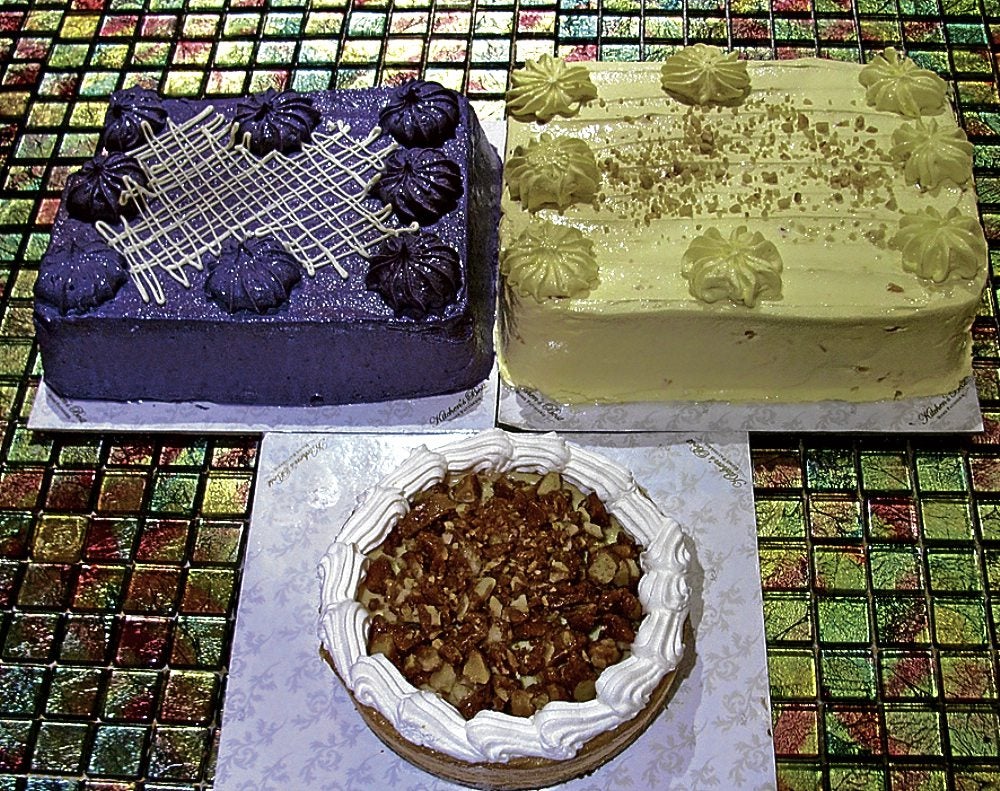 3 lady bakers from Christmas past

It is almost Chinese New Year but many of us still feel the spirit of Christmas. Surely there are still gifts that remain unopened, food baskets untouched and cakes that were delivered in time for the Feast of the Three Kings, but which we failed to partake of because of the guilt instilled by overeating during Christmas.

When my sister, Manang Babot, brought a whole Macadamia Brittle Cheesecake to the house, for one of my mom’s post-birthday celebrations, all she said was that she had cake. From her expression, I didn’t think it to be any special. When I took the cake out of the box, the brittle was melted and in truth, it no longer looked fresh. My guess was it had been sitting in her fridge. But when I sliced it, I noticed a very silky curd, which roused my interest.

The texture was exactly as I observed it to be when I first sliced it—an overly creamy cheesecake that in the mouth feels almost like an egg yolk-rich flan!

It was quite a pleasant surprise for me to learn that Roselyn Tiangco owned it. She used to attend my cooking lessons when she was in high school. I am so proud of her for baking as well as she does; but perhaps not particularly pleased by the number of calories her cake added to my very Renaissance figure!

Her macadamia cheesecake is synonymous with sinful. Every bite is a cholesterol nightmare; you feel it in your lips while eating it (the cream, the eggs, the cheese, the sugar), but you can’t stop because each bite is sheer pleasure; it is just too gratifying.

If she could bake something this good, there should be more to her repertoire.

True enough she has a purple yam cake. Imagine how this tastes like: layers of “brittle”-like merengue, with real, pure ubeng halaya, which has been whipped with delectable butter cream, sandwiched between them.

I thought the purple yam cake was a tough act to follow, but Roselyn has another creation worthy of praise, a perfectly executed Mango Sans Rival. It is sublime—from the merengue that is light as air, to the mango butter cream—it is such a tasty mouthful, so delicious without one overpowering the other. The mango and butter cream mixture is in perfect proportion. Excellent!

Kudos to Roselyn (the baker) and to her sister Martina (the finance officer) who as a team built Kitchen’s Best Home Patisserie. It is where we get the best of both worlds—professionally executed desserts with the rich taste and generous flavors of home.

On the first of January, I received a box of beautifully wrapped ensaimadas from Carmen Segovia, each one identical—coiled to perfection, amber in color, slathered liberally with butter and capped generously with strands of queso de bola. They were huge and looked delicious. But having eaten two ensaimadas the night before, it was something I was not particularly excited about until later that afternoon when I was craving for something sweet.

Considering that I was not keen on it, I ended up devouring it.

Unlike the other ensaimadas, this one had a bite to it, light but full, soft but slightly toothy. So nice to chew! I could taste the eggs, feel the sugar crystals melt with the butter, and finally, just when it was all too rich, a delightful sharp twist of flavor takes place—a sudden spurt of saltiness from the queso de bola.

Carmen Segovia is one of those old-fashioned bakers who does everything themselves. She also makes the softest sandwich—like clouds! And her mamon is unlike any other; similar to her ensaimada—you taste the eggs and feel the sugar sprinkled over the mamon that had been generously brushed with butter—soft but with a light density to it; not too airy, satisfying. For orders, call Carmen at tel nos. 7252849 or 4772229.

It was just around the time Simbang Gabi started that I received Ginny Gonzalez’s Cherry Walnut Torte. In the buzz of the season, I forgot all about it in the freezer.

When I tried it, it still tasted very good! Her merengue stays crisp, chewy and laden with walnuts. I can eat it even without the cream or the cherries. She makes this delicious torte with peaches, too.

Ginny is known for her delicious ice creams. She recently concocted lemon-dayap, her latest flavor. It is not at all sweet, tastes more like a sherbet with the consistency of ice cream. However, it is seasonal, since dayap is not available all the time. Desserts by Ginny, 0929-6834350.