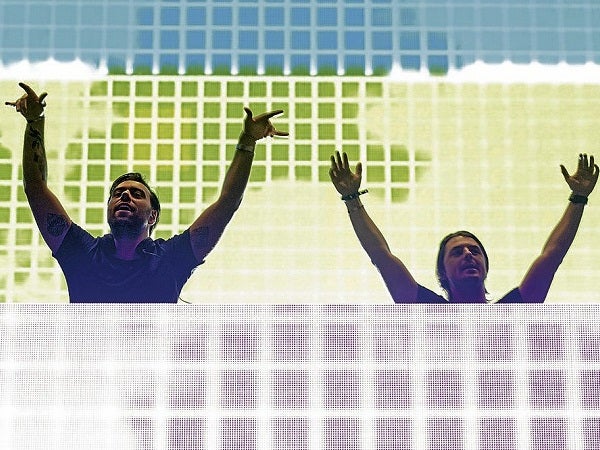 Who could blame them? If it panned out, it would be EDM history in the making, as house music hyphenates Axwell, Steve Angello and Sebastian Ingrosso had been dead-set on disbanding in order to focus on their equally thriving individual careers.

Naturally, the country’s most hardcore clubbers came to the SM MOA Arena in droves—Filipinos and foreigners, youngsters, yuppies and, yes, even the young-at-heart were all dressed to the nines, ready to throw caution (and sobriety) to the winds on a Wednesday night.

Never mind that everyone would probably be coming to school or work the next day with red-rimmed eyes and a hangover headache, assuming they’d even wake up in time in the first place. Nothing draws a crowd more than a farewell tour, after all.

That’s why it came as quite a shock to see only two shadowy figures emerging from behind the elevated DJ booth at around 11 p.m. Amid a low, rumbling chorus of boos, Axwell apologetically explained that Angello had caught a nasty bug and wouldn’t be joining them that night.

Did it matter? Maybe at first. Once we got over the crushing disappointment (believe me, it took a lot of effort and, okay, maybe a bit of beer), that’s when the party really started.

Despite being one member short, SHM’s last hurrah put Manila on a hump-day high, as its swan song tour was one audiovisual assault from start to finish. Much like David Guetta’s concert last October, the Arena was transformed into a giant club, complete with dancing laser beams, well-timed pyrotechnics and confetti showers, and seizure-inducing lights that frantically flashed in keeping with the thundering beats.

Admittedly, SHM’s setup was a bit distracting; the sound booth was in the middle of the Patron area, which effectively blocked the view of the DJs from the back rows. Minor peeves aside, we were pretty much blown away. And we meant that quite literally, since we could actually feel the sound blaring from the giant speakers.

As expected, the duo dished out retweaked hits from the compilation album “Until Now”: “One (Your Name)” featuring Pharrell Williams, “Antidote,” “Greyhound,” “Miami 2 Ibiza” featuring Tinie Tempah, “In My Mind,” and remixes of The Temper Trap’s “Sweet Disposition” and Ingrosso’s “Reload.”

With a little help from the nearby Absolut Vodka and beer booths, Axwell and Ingrosso’s euphoric tunes and highly contagious beats soon turned the self-conscious shuffling into a practical kind of dancing that gave you just enough courage to move however you like and not care about what other people think.

The crowd considerably perked up by the second hour, lustily yelling along to lyrics-based favorites like “Calling (Lose My Mind)” featuring OneRepublic’s Ryan Tedder, plus the remix of Coldplay’s “Every Teardrop Is a Waterfall,” which served as the hair-raising highlight of the evening.

As soon as the bridge of the Coldplay song came (“So you can hurt, hurt me bad/ but still I’ll raise the flag”), Ingrosso and Axwell leapt on the booth and started waving Philippine flags, with a giant version proudly displayed on the background screen.

It was during the Grammy-nominated global anthems “Save The World” and “Don’t You Worry Child” with fellow Swede John Martin, however, that the two DJs felt the full force of the Pinoy sing-along power, even prompting Axwell to comment about how much he was impressed by it.

Apparently wanting to hear more of the crowd’s singing, the duo indulged the ecstatic revelers with a few more encore songs, then bid a huge and hearty farewell with a reprise of “Child” remixed with “One.”

“You came. You raved. We loved it,” ended the heartfelt video message as the acoustic version of “Child” played on, imparting a bittersweet note to the lingering high that’s still buzzing in our heads and ringing in our ears.

SHM’s first official Manila gig might have been its last as well, but the group made sure it was one gig to remember, even though we’re willing to bet that many of those present can barely even remember half of it.