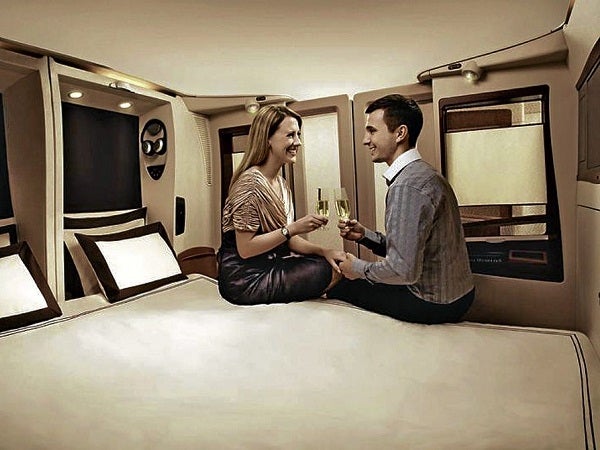 THE SIA A380 Suites has a 1-2-1 configuration, with a total of 12 Suites per aircraft: eight single beds, and two double beds for traveling couples.

Fly first-class for a pittance

A pair of first-class round-trip air tickets worth nearly P2 million, yours for only P5,000? Nice, really nice prize—if you’re lucky enough to win the raffle.

Shoppers of SM Department Store have a chance to travel on Singapore Airlines’ (SIA) A380 Suites class when they shop until March 31 using a credit card from seven participating banks.

The pot is worth a minimum of P1 million to almost P2 million, depending on the chosen destination. SM is giving away 12 pairs of tickets.

“Many associate SM with the [lower-end bracket] of shoppers,” Dizon said, “but we want to create something aspirational. It’s for all our loyal customers, not just for our high-end shoppers.”

The promo is timed for summer when Filipinos make plans for their annual holiday. The prize is valid for one year, said Rita Dy, SIA Phils.’ marketing communications manager.

SIA’s Suites is an exclusive cabin class that the airline claims to be a notch above first class. Debuted five years ago when SIA first began flying the Airbus A380, the unique concept features a truly exclusive cabin enclosed with sliding doors to ensure utmost privacy.

Each Suite also has a 23-inch high-resolution widescreen LCD television. Amenity kit is by Salvatore Ferragamo.

The SIA A380 Suites has a 1-2-1 configuration, with a total of 12 Suites per aircraft: eight single beds, and two double beds for traveling couples.

Does this give new meaning to the phrase “mile-high club?”

“We’ve heard of comments to that effect,” Dy said with a laugh. “The Suites are very private, so we see why people would think that.” Dy pointed out that the Philippines is, in fact, one of the top 10 clients of the airline’s Suites class.

SIA—the first airline to fly the A380, the world’s largest commercial aircraft—now operates 19 of these double-deck, wide-body jet planes.

Of its 10 destinations, the winners of the SM promo can choose from six destinations: London, Los Angeles, Paris, Zurich, Melbourne and Sydney. The London pair of round-trip tickets is the priciest, worth close to P2 million.

Shoppers don’t need to fill out forms, Dizon said. They are automatically assigned a raffle number per valid purchase in all of SM’s 46 branches. SM Advantage cardholders get double the raffle points. Purchases from the supermarket, however, don’t qualify for the promo.