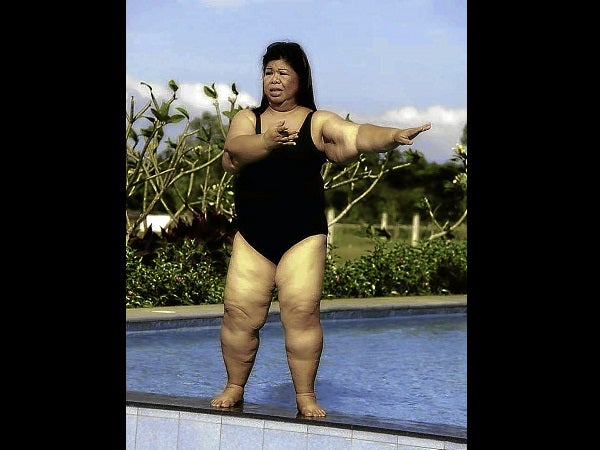 When theater actress Mae Paner and friends uploaded their first self-produced video of Juana Change on YouTube in December 2008, they didn’t imagine its impact on the public.

Tackling corruption, violence, patronage politics, idolatry, warlords and political dynasties, including tips on how to win elections in the Philippines, the Juana Change series of political satires now have 40 videos with hits ranging from 7,000 to 40,000 and counting.

Now, Juana Change has become a movie and hopefully will be shown in commercial theaters in mid-April this year.

“Magbabayad ka na ngayon (You have to pay now),” a chuckling Paner told the Inquirer on Tuesday.

She said, in a serious tone, that “Juana Change The Movie” is a sex comedy.

But she emphasized it contains the same concerns of her YouTube persona, which aims to make more Filipinos, the masses especially, see the real socio-political landscape that has kept them in the same desperate economic quagmire for a long time and, in the process, influence them to be proactive in effecting change.

But despite the serious themes, Paner assured that the film will make the ordinary Filipino audience entertained and laughing all throughout.

Just like the YouTube videos, Paner collaborated with friends from the theater to make the movie through their newly formed Laganap Productions.

Paner said that, in the movie, Juana Change leaves her parents in the province to study in the big city. “She goes astray, becomes a prostitute and meets different colorful characters in politics and high society.”

The story and screenplay is by veteran stage actor-playwright Rody Vera (He also masterminded the YouTube videos.)

Also starring are internationally acclaimed local actors Perry Dizon and Angeli Bayani, who both acted in Lav Diaz’s epic films “Melancholia” and “Death in the Land of Encantos.”

Leisl Batucan of Repertory Philippines also appears, among others.

Paner started her career in theater in 1983 with the Philippine Educational Theater Association (Peta), while finishing her senior year as psychology major at the University of Santo Tomas.

After college, she joined the Peta touring group for two years in its staging of “An Ode To Freedom” in Europe and North America.

She wanted to go full-time in the theater upon returning to the Philippines in 1987. But when her parents and an older sibling died, she became the breadwinner in the family.

She worked in advertising to support her three younger siblings. With hard work, perseverance and innate creative talent, she rose from the ranks —from production assistant to production manager to director until she put up her own production company.

With a steady source of income, she considered going back to acting onstage sometime in 2004, “during the ‘Hello Garci’ controversy.”

Among her memorable roles in Peta productions are “one of the witches in ‘Macbeth,’ a laundrywoman in Federico Garcia Lorca’s “Yerma (Barren)” and a smorgasbord of characters in the stage adaptation of Carlos Bulosan’s “Nasa Puso Ang Amerika (America Is In The Heart).’”

She has likewise become a regular guest in various Tanghalang Pilipino plays at the Cultural Center of the Philippines. She also joined local actors in productions abroad like “Bedtime Stories” in Japan and another play in Singapore.

“I breathe theater,” she said, but instead of resting on her laurels, she forges on with her advocacy as Juana Change: “Because I believe that anything that you do, no matter how small, whether you’re buying glutathione or a Porsche, it affects the society, the world you live in. Anything personal is political.”