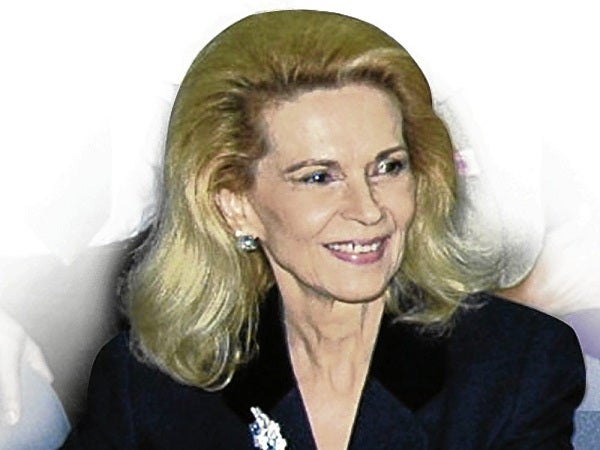 Our lunch table last week had a curious, if odd, votation—are you “Team Cristina” or “Team Gigi”?

Even if it ran on pre-primetime TV, it nonetheless became the talk of the town  for the simple reason, we assume, that their accusations and insinuations involved the most covetable stuff on earth—money and women, with Cayetano calling attention to the palpable power of Gigi Reyes, Enrile’s Chief of Staff.

Suddenly out in the open was the powder-room speculation about the statesman-legislator’s tight relationship with his staff executive whose legal acuity, people said, helped Enrile through the recent impeachment proceedings.

So, of course, Manila being Manila (like Washington being Washington), pundits, gossips and Ladies Who Lunch enjoy pitting the COS against the Mrs.—Cristina.

Why? Because Manila loves intrigue—and romance, no matter that it’s only all in the headlines.

If Cristina Ponce Enrile is true to character, perhaps now, if she’s perturbed at all, she’s able to look beyond the headlines and into herself and try to draw strength from that inner source.

In a 1999 Inquirer interview, after she announced that she was going away—from her marriage, for a while—we asked her, what if there’s another woman in her husband’s life?

She said, “Another woman? . . . It doesn’t affect me anymore at all. No more emotions involved. In fact, I’ll probably welcome it—loving is not being selfish.”

Let me run an excerpt from that article, simply because her statements could be applicable to what’s happening to her today:

Then a longer pause, and she turned even more emphatic. “What I want to stress is I can’t hate anybody. Hate is too negative a term for me. Not even dislike. I don’t have that feeling anymore. I don’t want to hurt anybody. I don’t feel envy. [I want] just the simple life.”

Ironically, when she decided she wanted her freedom and thus, to leave the marriage, she said, “I didn’t have the pain anymore.”

Her therapist, she said, explained that in women the so-called “love energy” wanes thrice—when the woman is in her 40s, 50s and 60s.

“The 60s is the woman’s last hurrah, and thus it could be a dangerous [stage],” she quoted her psychiatrist.

Therefore, when she had finally weaned herself from the marriage, she left it. “After that I was more at peace.”

This was in 1999. (The interview is part of my book, “i’m afraid of heights (or why i can’t social-climb),” launched last November.)

In fact, the Enriles have stayed married. They celebrated their 55th wedding anniversary last year, with their children, grandchildren and great grandchildren.

They also had a joyful New Year’s Eve celebration this year, with the entire brood, with Senator Enrile singing Ilocano songs at the family party in the vast family compound in Makati.

In the 1999 interview, asked how she survived the trials of their marriage, she said, “A lot of character . . . and that comes from only one source, God.”

We haven’t asked her about the latest episode, but we doubt if her answers would be much different.

It was daughter Katrina who had something to say about last week’s ugly exchange in the Senate, which she text-messaged to a friend. She said, “We are the collateral damage to some very selfish senators. People can feast on us all they like but in the end, does it really matter?”

Speaking of the Enrile bio, we stumbled—literally almost stumbled—on its editor, Nelson Navarro, in a bookstore late last year. He was almost slumped on the floor, so engrossed poring over the pages of a travel guide.

He showed me the travel guide—to Kazakhstan. He was excitedly telling us about it; that was where he planned to go after the launch.