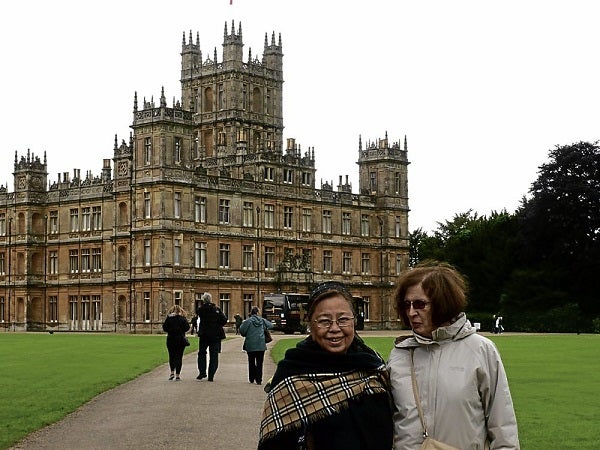 THE LAST half of my sabbatical brought me to several capitals of Europe. After my spiritual renewal sessions and retreat in Ireland and Scotland, I came to London just in time for the opening of the Olympic Games. We watched the event in a town square with a giant screen. It was spectacular!

But let me backtrack a little. Before London, I stayed with a feminist theologian friend, Mary Grey, in a charming village called Wherwell in Andover—a town in the English county of Hampshire.

Her home is a romantic cottage with a thatched roof and a beautiful garden at the back of the house, with a river flowing beside their garden and a bridge over it.

Can you imagine eating breakfast with a flowing river before your eyes? There were two swans and ducks which I fed everyday.

Mary lives with her husband Nicholas, an award-winning philanthropist. Both of them established the Wells, India project 25 years ago, providing potable water to some villages in India. Mary is a famous writer of both theology and poetry.

The couple brought me to visit the Winchester Cathedral where there was an exhibit on the late novelist Jane Austen, who had lived nearby. We also went to the Cathedral of Salisbury and the Benedictine Abbey of Douay, where we prayed Vespers with the monks.

The highlight of my visit was the meeting with the Filipino community. Agnes Sitjar from Tuguegarao, her husband Edgar and their two children, Emman and Adrienne, became my adopted family. It was Agnes who organized the Filipino community here; she brought me to her place of work, the Winchester hospital, which was founded by Florence Nightingale. Most of the Filipinos here work as nurses in the hospital.

On Sunday, I attended Mass at the Winchester parish of St. Peter’s. I gave a couple of talks, and a festive Filipino lunch followed.

Agnes and her family are going to the Philippines in 2014, and she is already thinking of ways to help the Winchester hospital. The Filipinos also brought me to the castle where the supposed Round Table of King Arthur is displayed on one wall.

I arrived in London on July 10 and lived with Onyet, a friend of Nonoy and Grace Tan. She was a former activist in Infanta, Quezon, but has lived in London for more than 15 years.

She not only picked me up in a cab, but also gave me an Oyster card with £20 to enable me to use the London buses and underground.

On the feast day of St. Benedict, I went to Mass at the Benedictine Abbey of Ealing. One monk told me that Tyburn Abbey is a Benedictine nunnery, so I went there. Who else but a Filipino nun would open the door—Mother Macrina Aranas from Batangas.

She said there was another Filipino in the community, Mother Esther Dizon from Tarlac. We had a wonderful sharing the whole afternoon over pancit.

Later on, an English nun gave me a tour of the crypt and told me about the 300 martyrs executed during the reign of King Henry VIII. She described their torture and death very graphically: hanged, quartered, and sometimes dunked in boiling oil. I think that is why the sisters have perpetual adoration — to expiate for the terrible violence that happened where their convent stands.

Onyet brought me to Windsor Castle, the official residence of the Queen. The royal flag was flying, so that meant the Queen was in. We visited the State Room, then followed a long queue to Queen Mary’s Doll House. This was given to her by a grandniece.

It was amazing how the miniature rooms and salons were so elaborately and meticulously made, even down to miniature cups and saucers and portraits on the wall.

There was also an exhibit of the Queen’s photos on the occasion of the 60th anniversary of her reign. We passed by St. George’s Chapel before heading home.

I spent a summer semester in the University of Cambridge in 1971, when I was working on my doctoral dissertation on philosopher Ludwig Wittgenstein, who taught at Trinity College within Cambridge.

I could not recognize the Cambridge I knew. There have been so many buildings erected since then. Even St. Edmund’s House, where I lived, is now St. Edmund’s College and has three additional buildings.

Julie, a friend I met in London, picked me up from the station and brought me to Professor Nicholas Lash, who was my colleague as international editors of Concilum for eight years. Lash invited me to lunch.

Hampton Court, the magnificent palace of Henry VIII, was one of best preserved palaces I visited. I reviewed the life of this king, his many wives, the people he ordered killed.

There were costumed actors and actresses who went about as if they were really the inhabitants of the castle. I saw someone portraying King Henry VIII talking with his adviser Wolsey in the garden.

Some ladies in waiting passed by, chattering, saying that they were preparing for the wedding of the king to Catherine Parr in the small chapel.

After witnessing the changing of the guard in Buckingham Palace, a friend brought me to ride the London Eye, the giant Ferris wheel near the Parliament across the River Thames. I had a magnificent view of London on all sides. I could not look down because I have a slight fear of heights!

A newfound friend, Jamima, Executive Director of Kanlungan in London, brought me to watch the stage musical “Billy Elliot,” which is about the 10-year-old son of a miner who wanted to be a ballet dancer.

It showed the plight of the miners in England and the struggle of the boy to fulfill his dream. This is the true story of a dancer who now dances for the Royal Ballet School.

Oh, yes, I also saw “Porgy and Bess” and watched a recital of the students of the Royal School of Ballet at their theater.

(Next: Off to Austria and Switzerland)