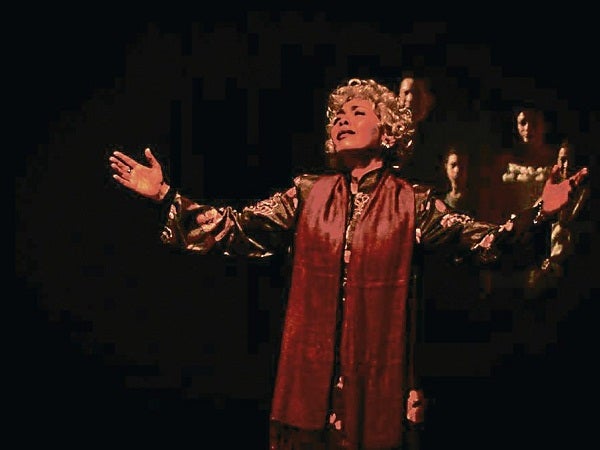 Spotlight Artists Centre’s revival of “Katy,” which closed last Sunday after a 12-show run at the CCP Little Theatre, was not without its flaws.

Sure, this brainchild of Joey Reyes (book and lyrics) and Ryan Cayabyab (music)—an attempt to chart the life and times of Katy de la Cruz, so-called queen of Filipino jazz—still proved a musically relevant piece bursting with boundless creativity. What it suffered from was Nestor Torre’s puzzling direction.

The second act, in particular, felt quaintly fragmented; blackout after blackout made the entire thing seem a disjoint constellation of memories, in contrast to the previous act’s more cohesive storytelling. One moment, it’s World War II, the villagers expressing their anguish through the rousing “Luha sa Kinalimutang Lupa”; the next, Katy’s already in California, fatherless and a widow.

Scenes ended abruptly, would-be emotional high points cut short, and more than once, the audience was left in the dark for far too long as the transitions trudged along.

Which begged the question: Why go?

If only to witness the modest theatre almost explode with the sheer amount of theatrical talent propelling this production skywards. In its quest to humanize its title character through nearly three hours of song and dance across decades, “Katy” triumphed with a magnanimous cast destined to go down as one of the year’s finest ensembles.

At the forefront was Isay Alvarez, who originated the part of bar girl Gigi in “Miss Saigon” in London. Here, as the adult Katy who appears only in the prologue and second act, she was a luminous presence to behold. She growled her way through the songs, as her character would imaginably once would, and inhabited the role with a silent sorrow and ever-growing wisdom in her eyes. If this was the real Katy, no one could possibly tell, but Alvarez gave us a starkly layered depiction.

Meanwhile, teenage Katy was palpably portrayed by Aicelle Santos, reportedly one of the final seven women in the “Miss Saigon” auditions last November 2012. Consider this now her breakout performance—with an explosive rendition of “Balut,” and displaying a flair for comedy in the farcical “Bituing Tahimik.”

The rest of the cast relished their roles with as much theatrical joy, best illustrated by the trio of Tricia Amper-Jimenez, Celine Fabie, and CJ Mangahis (as full-volume Mary Walter), Katy’s fellow showgirls and requisite support throughout the musical.

Tirso Cruz III, nowadays a staple patriarch figure onscreen, played Katy’s father with sagely, overbearing watchfulness. He also sang “Tingnan Mo nga Naman,” a father once more getting through his daughter after years of muddle, and the heartbreak was visceral.

Gian Magdangal—man of the hour in Act I, tired and pot-bellied in Act II—made for a surprisingly compelling Peping, Katy’s philandering husband. Dulce, that booming voice that calls to mind Broadway’s Patti LuPone, successfully painted a sympathetic interior to faded star Olivia.

We can go on extolling the virtues of this wondrous set of performers, and it won’t be wrong. “Katy” was truly an actor’s show.

But there was a moment in Act I when all else must be forgotten, and all eyes focused only upfront. The stage bare, the spotlights focused on two women—Dulce and Santos, vanguards of two generations of Filipino singers. Without a hint of fanfare or eye-popping background, they launched into a duet of “Minsan ang Minahal ay Ako.”

For a production bereft of scenery and props, for a show that could get quite loud and lasciviously funny, these four minutes of soaring voices, beautiful lyrics, and sheer musicality—undeniably this production’s zenith—were the ultimate reason to buy a ticket. This was a sold-out run, of course.