She Juana Change the world, starting with herself | Lifestyle.INQ ❮ ❯ 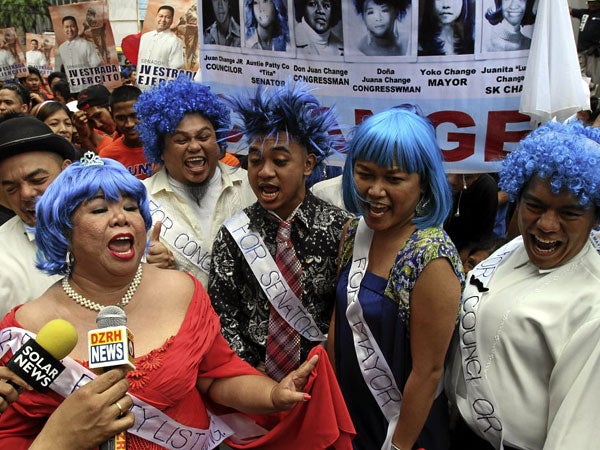 ALL IN THE FAMILY: Juana Change and Carlos Celdran (behind her, left) perform a send-up of political dynasties at the Comelec office (PDI File Photo/Niño Jesus Orbeta)

She Juana Change the world, starting with herself

She has done what very few actors have done before: be outrageously funny and deadly serious at the same time about the hottest issues in the political and social landscape.

Multi-awarded theater actress and television director Mae Paner, through her alter-ego, YouTube sensation Juana Change, has literally thrown her weight around and has become an undeniably effective vehicle for pushing needed reforms in the Philippines.  This, according to veteran stage actor, director and writer Rody Vera who frequently collaborates with Paner in her unique feat.

Of recent memory was Paner’s involvement with a group of concerned citizens and artists, among them theater personality, Catholic Church gadfly and Manila walking tours proponent Carlos Celdran, that pushed the Commission on Elections (Comelec) to come down hard on so-called “epal” (from the word “kapal” or thick-skinned)  politicians.

The two even led their own “epal” tours in Metro Manila—with Juana Change in full nouveaux riche regalia—to raise the public’s awareness on these politicians who were campaigning for the May 2013 elections way before the start of the official campaign period, or are quick to take full credit for projects funded by taxpayers’ money.

That the public was quick to post on the anti-epal movement’s website their own pictures of “epal” politicians posturing in their area is a positive reaction that can be attributed to Paner’s tongue-in-cheek approach to attacking the perennial problem of reelectionist politicians blatantly ignoring election rules.

Juana Change even brought the “Change family” to the Comelec, in costume of course, to file their own faux certificates of candidacy in a delicious send-up of the political dynasty ruling local polls.  It was such a spectacle that even Comelec chair Sixto Brillantes came out to meet with the heavyweight comic and commit his support to the highly successful anti-epal movement.

It is this passion to see the anti-epal movement that helped Paner, a longtime member of the Philippine Educational Theater Association, find time for the campaign despite the pressures of rehearsing for “Stageshow,” the last work of director Mario O’Hara, shown last year at the Cultural Center of the Philippines.

Juana Change was born in 2008, mainly because of anger among several sectors including non-government organizations, at the blatant corruption in government under the Arroyo administration.

Paner and friends then uploaded the short and funny videos that took a swipe at government on YouTube, a highly accessible platform that registered over 100,000 hits at one time, allowing Juana Change to vent on a variety of subjects that drew people’s attention to important issues of the day.

That Juana Change spares no one is also part of her appeal.

No politician or public figure escapes her razor-sharp wit, not even popular President Aquino for whom Paner enthusiastically campaigned in 2010.

Without mincing her words, Change took Aquino to task in 2011 for getting a Porsche (using his own money, he stressed repeatedly) because, she scolded him, government officials were supposed to live “modest” lives and avoid an “extravagant” lifestyle.

In her videos, Juana Change also touched on corruption in government, charter change, crass politicians, the reproductive health bill and even the plight of overseas Filipino workers and how the country relies heavily on their remittances.

And now, the videos are migrating from YouTube to the cinemas with the showing on April 17 of “Juana C The Movie,” which Paner promises will poke some more fun at politics, corruption, social class, consumerism and sex.

The momentous change coincides with a milestone in Paner’s life: She is turning 50 in May this year.

The movie revolves around Juana, a happy-go-lucky and obese member of an indigenous tribe, who goes to the elite Arneo de Manila University to fulfill the community’s hopes for her to finish school, become a lawyer and fight for their ancestral land.

She soon discovers upon arriving in Manila, however, how challenging that dream could be. She soon finds herself embarrassed by her poverty and identity, and converts herself into a bar-hopping and salon-pampered colegiala to become more acceptable in her new world.

To finance her lavish lifestyle, she becomes a high class, plus-size prostitute for the unexplored market of “chubby chasers.” The synopsis goes on to say that it is this foray into the flesh trade that brings Juana to the doorstep of corruption in government and greed in the corporate world.

The movie banks on the same formula that has made the Juana Change videos and her persona such a success—using comedy to train people’s focus on serious issues such as graft, corruption and corporate excess.

That Juana Change would use her own brand of sexuality to bring her message across just adds one more layer of fun and genius to the promising movie. Indeed, the “new sexy” invades the silver screen.

But Paner remains the undeniable star of the show, the force behind this determination to see change happen in the Philippines.

“Honestly, hindi ko alam kung ano ang nasinghot ko at naging ganito ako ka-adik sa pagmamahal sa bayan (I don’t know what drugs I took that have made me such an addict for love of country). The more I see my own excesses, the more I know may kinalaman ako kung bakit nagkaleche-leche ang bayan natin (I have a part in this mess),” confessed Paner, a Psychology graduate of the University of Santo Tomas.

“I have allowed myself and the more corrupt to get away with what I/they do. The wrong in the obviously bad (like former President Arroyo and former Chief Justice Renato Corona) and the seemingly good (like President Aquino and myself) drive me to transform on the personal and social level,” added Paner, who lost over 40 pounds as part of her own campaign for change to start with her.

For Paner this time around, Juana Change has become both a political statement and a personal commitment. •