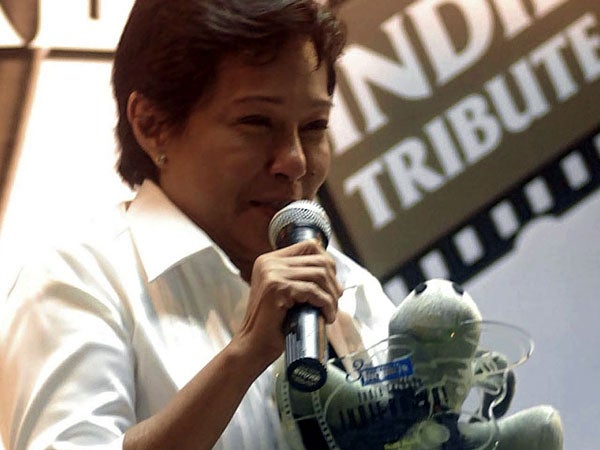 The fall and rise of La Aunor

Just when showbiz observers had written her off as a has-been, having lost that golden voice in a botched surgery in Japan, singer-actress Nora Aunor bounced back, capping her return with several international acting awards.

Well, she isn’t considered the country’s superstar for nothing.

It was there that she won the Bisato D’Oro prize handed out by an independent critics’ group.

It was in December as well when she won best actress for the same role in the Metro Manila Film Festival, her eighth trophy from the same body.

Recently, La Aunor got another best actress nomination from the Asian Film Awards (AFA), whose awarding ceremonies will be held in Hong Kong in March.

Another AFA nominee is Aunor’s “Atsay” director, Eddie Garcia, who is competing as best actor for “Bwakaw.”

The two were reunited as honorees at the annual Inquirer Indie Bravo! Tribute held last month.

Aunor recalled how nervous she felt upon meeting Garcia, who helped her win best performer at the MMFF for “Atsay” in 1978—the only time such recognition was accorded an actor.

“I always get tongue-tied when I meet people I look up to,” she said in Filipino. “But Direk Eddie made me feel at ease that night. He whispered to me: ‘You’re looking good.’”

Indeed, things are looking up for La Aunor in spite of the controversies that dogged “Thy Womb” at the MMFF. Due to poor ticket sales, the movie was reportedly pulled out of theaters early to give way to the top-grossers.

“I will continue acting in movies that will uplift our countrymen,” she said of the movie’s poor showing. “I am willing to produce my own movies so that I can choose projects I feel strongly about, films that make a difference.”

In the works for the Superstar is an indie film on the struggles of Edita Burgos, mother of missing activist Jonas Burgos. The movie will be directed by Joel Lamangan, with a script written by Ricky Lee and produced by Harlene Bautista of Heaven’s Best Productions.

Aunor has never shied away from films that have social significance despite box office results that show the Filipino moviegoers’ predilection for horror and fantasy franchises.

As early as 1976, she starred in the anti-US bases film, Lupita Aquino-Kashiwahara’s “Minsa’y Isang Gamu-gamo.”

She explained that doing socially relevant films is her way of giving back to the masses who have supported her all these years—who have patiently followed her meteoric rise from being an amateur singing contest champion to her present stature as an internationally acclaimed actress.

When she was a teenager she would mindlessly make one potboiler movie after another, she recalled.

“But (later), I wanted to make movies that would challenge me as an actor,” she said.

“I learned a lot from each director I worked with,” she said.

Now, she’s excited to collaborate with a new generation of filmmakers. “In indie films, we are able to make movies that are different and daring.”

When she won at the MMFF, she called the Inquirer the following day, to express thanks to the people who have made her nth comeback possible.

“TV5 was the first to gamble on me when everyone else had their doubts,” she related.

She said she’s eternally indebted to friends, like German Moreno and Glenda Kennedy, who helped her when she hit hard times in the United States, where she was based for eight years prior to her 2011 homecoming. She even thanked immigration lawyer Michael Gurfinkel who fixed her travel papers.

But La Aunor reserved her deepest gratitude to the people of Tawi-Tawi, where “Thy Womb” was shot.

“I want to go back to Tawi-Tawi,” she said. “I promised to build a health center there.”

Giving back, she asserted, is her ultimate joy.

“It gives me happiness to make other people happy,” she said.

But La Aunor’s biggest challenge yet might be the fickle memory and short attention span of today’s generation who might find her movies a tad too heavy or dated for their taste.

Does the actress have what it takes to compete for the attention of this wired generation?

She doesn’t really have to, director Mendoza contended.

“She should continue doing significant films. A legend doesn’t need to reinvent herself. She just needs to exist and remind people of her relevant contributions to the Filipino film industry.”

For today’s generation to become more familiar with the Superstar’s body of work, the award-winning director suggested the mounting of film festivals in her honor. “We should hold a retrospective of her important films. She should also collaborate with young filmmakers.”

After all, she is a “national treasure,” Mendoza said. •