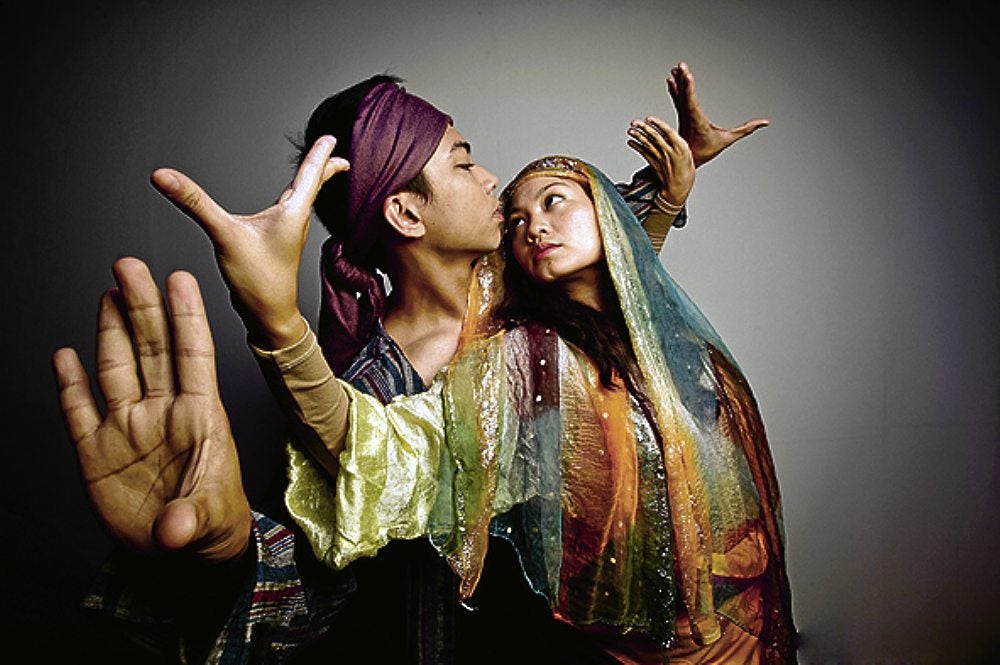 That “Romeo and Juliet” is a “Christian” play, specifically a Catholic one, in the surface sense that its characters and original medieval Verona milieu are all embedded in a Roman Christian culture, is something already universally taken for granted.

The play cues this inference, of course, with the presence of the Franciscan friars Laurence and John, as well as invocations of saints and shrines, pilgrims and purgatory in the text. In modern versions, the protagonists remain of staunch Catholic stock—Puerto Rican and Italian-American in “West Side Story,” for instance; or natives of a Verona Beach in Miami drenched in Catholic iconography, in Baz Luhrmann’s MTV-flavored 1995 movie adaptation.

Would the Bard’s story of star-cross’d lovers work as well in a Muslim environment? The answer, based on Tanghalang Ateneo’s recent production “Sintang Dalisay,” is an emphatic yes.

Transposing the play to the world of the indigenous Sama-Badjao people of Mindanao by employing the tribe’s traditional dance, the igal, as its movement motif, “Sintang Dalisay” succeeded in reimagining “Romeo and Juliet” as an integral universe of ancient rido (family feuds), religious rigor and unbending custom, vivified by splendid finery (costumes by National Artist Salvador Bernal), atmospheric kulintang harmonies and undulating ululations, even the kris ably nudging its Western counterpart aside in those indispensable Shakespearean sword fights.

The transposition had help from two other sources—the 1901 awit (Filipino narrative poetry) “Ang Sintang Dalisay ni Julieta at Romeo” by one G.D. Roke—the earliest Tagalog version, according to UP professor Judy Ick in the program notes, the lovers’ tale contextualized within turn-of-the-century Tagalog culture—and the more classically faithful translation by National Artist for Theater and Literature Rolando Tinio. 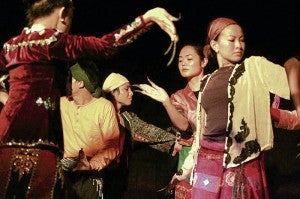 However, director Ricky Abad and co-performance text creator Guelan Valera-Luarca appeared to have settled on a broadly pruned iteration (no soliloquies, for one), with rather deflated poetry but one that also gave this “Sintang Dalisay” swift narrative flow and sharp compactness.

Its life force came not from the verses but from the rich, sensuous allure of the igal. On a stage bereft of scenery, with only the live neo-ethnic band led by Edru Abraham as backdrop and aural anchor, the play unfolded as one seamless movement piece, each line-italicizing pose and gesture charging the play with a textured ardency.

Adding to the fine-grained theatricality were the ingenious use of native mats to mark off spaces and scene changes.

To its credit, the cast of mostly student or TA alumni actors, which had trained with four master igal teachers from Tawi-Tawi brought in by Ateneo during the summer, performed their paces with exactness and brio.

The leads—Kalil Almonte and Tasha Tañada in the show we caught—were well-cast, though Almonte (now Rashiddin to Tañada’s Jamila in the Islamic city of Semporna), while looking the part and evincing sensitive playing, could use a bit more assured flourish in his movements.

That unity of expressive dance and articulate verse-acting was achieved most impressively by one cast member—Brian Sy as the imam, this version’s Friar Laurence.

“Sintang Dalisay’s” honorable, thoughtfully stylized retelling of those “poor sacrifices of our enmity”—a Romeo and Juliet of a culture and consciousness now so near our own—felt just about right. It represented the ideal kind of reimagining: old tale made convincingly new. 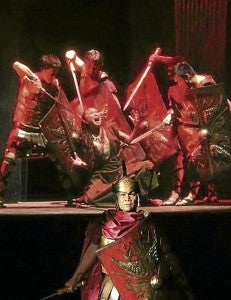 In contrast to “Sintang Dalisay,” George de Jesus III’s production of “Titus Andronicus,” which ran for a mere three days at the De la Salle-College of Saint Benilde School of Design and Arts Theater, was a straightforward translation of Shakespeare’s early play into Filipino.

No imposed concept here; other than the Filipino text, the retained Roman-era setting precluded any touches of local color or modern inflection.

One could be forgiven, however, for thinking otherwise at the outset, since the play was foregrounded by the sound of loud, nihilistic rock. A punk “Titus,” perhaps?

And no wonder. This was the showcase production of students of the school’s production design and technical theater programs, and as showcases went, the scrupulous scenery they came up with could give professional theater companies in town a run for their money.

The use of video projections, particularly, was judicious and deft, instantly shifting locales from imperial court to Roman plaza to thick forest—a beautifully conjured sylvan sight of treacherous shade and fallen giant statuary, where Titus’ daughter Lavinia (Mara Marasigan) would be ravaged.

The only badly designed element was the cumbersome ramps that required time to be reconfigured from scene to scene, thus stalling the play and cluttering the stage with actors-cum-stagehands.

De Jesus, one of the country’s most proficient adaptors of foreign material (Tanghalang Pilipino’s “Orfeo sa Impierno” from Tennessee Williams’ “Orpheus Descending”; “Godot, Wer Is U?” from Beckett’s “Waiting for Godot”), deployed a mix of earthy and elevated Filipino for this “Titus.”

Marasigan, Paule, Santos, Deocareza, Russell Legaspi (as Lucius) and Paolo O’Hara (Titus’ brother Marcus) were adequate, if unmemorable, in their roles. Joel Saracho, meanwhile, played Titus with a weary rational solidity that served him well in the early scenes, but seemed to shortchange his character as it slipped into the guise of madness—a gradual slackening that closely tracked the production’s own momentum.

Its second act, though goosed now and then by lively spurts of blood, the snarling Tamora of Kalila Aguilos and Nar Cabico’s brief but marked turn as the bad news-bearing nurse, had leaden spots one too many—a state of affairs redeemed only by the final scene of mass carnage, which was staged as a mean, eye-popping wallop of pure viscera, squeamishness be damned.

If anything, that unfettered ending marked this production out as a gleeful equal to the promise of its brash, slasher-rock beginnings. 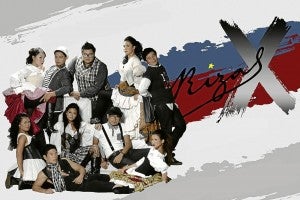 If Shakespeare rendered fresh is a perennial challenge for artists, so is José Rizal. On his 150th birth anniversary, what, indeed, has been left unsaid of the national hero and his legacy?

Dexter Santos’ “Rizal X,” ongoing at UP Diliman’s Guerrero Theater, attempts another stab at the enterprise, and it’s an effort distinguished by equal parts surprising novelty and admirable panache.

Santos’ first and most astute imposition on himself and his co-creators (headwriters and dramaturgs Katte Sabate and Chic San Agustin) is to ditch the civic preachiness altogether. There is no rote summoning of Rizal’s virtues here, no appeal to stock imagery of his heroism and example.

Instead, there is rage and angst, yearning, confusion, love and combustible conviction—in short, those roiling emotions the young Rizal must have felt himself during his storied life, and now mined by this production, often to thrilling effect, for its intended youthful audience.

That impressionistic palette finds expression not in a traditional narrative but in vignettes and sketches by various collaborators, which swim off, mostly in contemporary directions, from details and snatches of Rizal’s life and work.

Some have the whiff of the well-worn in them—Sisa, for instance, becoming a sequence about three mothers falling prey to servitude in foreign lands; or Crispin and Basilio now ending up as street kids.

One early vignette, “Kimera at Espinghe,” by Vlad Gonzales, about Rizal grappling with his nascent writerly urges, seems more obscure than illuminating—though it’s fair to point out that Alchris Galura, the indie movie actor who’s only on his third stage outing here, fails to make the sequence fly, let alone appear coherent.

Elsewhere, the stage burns with potent inspiration. “Alisbayan Box,” with text by Layeta Bucoy, is a raucously moving look at the national diaspora, mirroring Rizal’s own solitude for country while on European soil.

In “Women of Rizal,” an affecting tapestry of words exchanged between the Filipino swain and nine women across the globe, Rizal emerges as a flesh-and-blood, if often opaque, lover.

Leonor Rivera, Rizal’s greatest heartbreak, is given a special place in “El Dolor de Amante,” radiantly played by Maita Ponce. And Jean Judith Javier and Red Concepcion bring a gracious moment of stillness to the spirited proceedings with “La Deportacion,” a musical snippet Rizal himself had written during his Dapitan exile. (That dancing could go, though.)

Helping stitch these moments into a fiery portrait of youth on the cusp of change is the brilliant music-making by William Elvin Manzano.

After his similarly laudable work in last year’s “Cyrano de Bergerac,” Manzano’s soulful, propulsively melodic songs are helping usher in a fresh, energetic sound to local musical theater. “Rizal X’s” best moment, “Sinubukan,” a summons to arms after Rizal’s “Where are you, youth?” lament, brings that heartfelt fire and swagger to its zenith.

This new generation of artists, along with Santos, Manzano, the inventive scenic designer Leeroy New, et al., represents the future of Pinoy theater. If “Rizal X” is any indication, it’s a bright one.