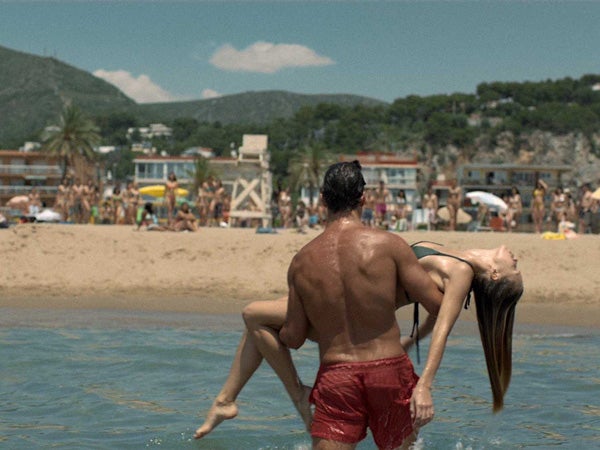 This undated screenshot provided by Axe shows the Super Bowl advertisement for Axe. Axe's 30-second ad in the third quarter of the game shows a woman in the ocean getting rescued by a sexy lifeguard, but going for an astronaut instead. It promotes Axe's new cologne "Apollo" and its contest to send someone on the first suborbital space tour in 2014. AP/AXE

NEW YORK — Sex sells. Babies sell even more. And advertisers are hoping animals will make you laugh all the way to their stores.

While the San Francisco 49ers and the Baltimore Ravens battle on the field during Super Bowl XLVII, marketers from Best Buy to M&M to Toyota are competing against each other on advertising’s biggest stage. And they’re doing so by pulling out the most persuasive tools of their trade.

The stakes are high, with 30-second spots going for as much as $4 million this year. And more than 111 million viewers are expected to tune in.

Here are some ad highlights through the third quarter:

BABIES, ANIMALS AND FAMILIES OH MY

— Hyundai’s “Epic Playdate” spot right before kickoff showed a family partying with the band The Flaming Lips: wreaking havoc at a natural history museum, getting chased by bikers, going to a petting zoo and playing in a park.

“Make every day epic with the new seven-passenger Santa Fe,” a voiceover states.

When the family gets back home and the daughter asks, “What are we going to do now?” The father replies, “Well, I think there’s a game on,” and the broadcast went straight to the kickoff.

— Audi’s 60-second ad in the first quarter, with an ending voted on by viewers, shows a boy gaining confidence from driving his father’s Audi to the prom, kissing the prom queen and getting decked by the prom king.

— Toyota’s ad stars Kaley Cuoco from CBS’s “The Big Bang Theory” granting wishes to a family, from a boy wanting to go into space to a dad wanting to lose his “spare tire.”

— Budweiser’s Clydedales made another appearance in an ad that shows a man and his horse reuniting after several years.

“Will this one read “50 shades of Grey to me in a sexy voice,” Poehler asks about an e-book reader. When the staffer says no she asks, “Will you?”

— M&M’s showed its red spokescharacter singing Meatloaf’s “I Would Do Anything For Love,” and wooing beautiful women, but stopping short when they try to eat him.

— Oreo’s ad featured a showdown in a library between people fighting over whether the cookie or the cream is the best part of the cookie. The joke — the fight escalates into thrown chairs and other destruction, but because the fight is in a library, everyone still has to whisper.

— Doritos went for humor with its two user-created spots. Winners of the “Crash the Super Bowl” contest included one about a Doritos-crazy goat. Another showed a dad playing princess with his daughter to get Doritos. His buddies catch him, but instead of making fun of him they join in the fun.

“Is that my wedding dress?” says his wife when she sees them playing.

— Budweiser showed rival 49ers and Ravens fans each creating a voodoo doll for the other team with the help of a mysterious figure in a bar. “It’s only weird if it doesn’t work,” reads the copy.

— Taco Bell showed a group of seniors partying, getting tattoos, and eating its Doritos Locos Tacos

— Tide showed a guy who gets caught in an awkward moment in the laundry mat, holding a woman’s yellow panties in his hands

— The Milk Processor Education Program, known as MilkPep and popular for its “Got Milk?” print ads, featured actor and professional wrestler Dwayne “The Rock” Johnson in a 30-second ad in which he battles all kinds of oddities on his way to get milk.

— Chrysler made a splash with a two-minute spot during halftime showing families waiting for their family members to return home from serving with the armed forces abroad. Media mogul and TV personality Oprah Winfrey read a letter from the Jeep brand to encourage families to stay hopeful.

— Godaddy.com’s spot toed the line of good taste, showing a close up extended kiss between supermodel Bar Refaeli and a nerdy nobody to illustrate Godaddy’s combo of “sexy” and “smart.”