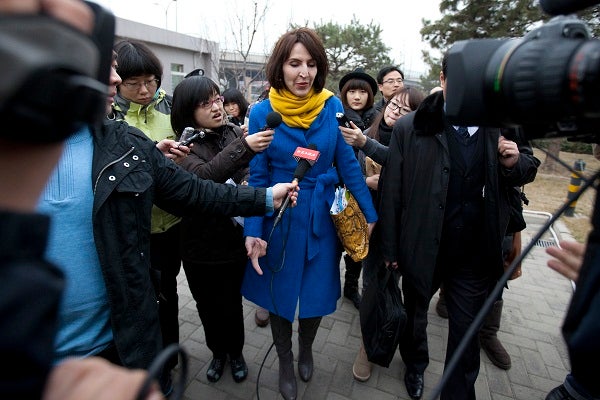 In this file photo, Kim Lee, center, wife of "Crazy English" founder Li Yang, is surrounded by local journalists as she walks into a court for her divorce trial in Beijing, China. (AP Photo/Alexander F. Yuan, File)

BEIJING — A Beijing court has granted a divorce to an American woman and her Chinese celebrity-entrepreneur husband in a high-profile case that highlighted the often-hidden problem of domestic violence in China.

The case began when Kim Lee posted graphic photos of the injuries she said came from her husband Li Yang on her microblog in 2011. Li Yang’s chain of English-teaching schools, “Crazy English,” is a household name in China.

The photos of the bump on her forehead, bruises on her knees and a bleeding ear went viral and sparked tens of thousands of postings on Chinese Twitter-like sites, along with protests and talk show debates. She inadvertently became a folk hero for battered women because domestic violence isn’t often talked about in China, where tradition holds family conflicts to be private. It is also hard to go public in a country where many still consider women subservient to their husbands.

The official Xinhua News Agency said the divorce was granted Sunday on the grounds of domestic abuse and the court approved Lee’s request for a three-month restraining order against Li.

Reports said the court ordered Li to pay his former wife 50,000 yuan ($8,000) compensation for mental anguish as well as child support. She will also have custody of their three daughters and receive properties worth more than 12 million yuan ($2 million).

A woman from the press office of the Chaoyang District People’s Court confirmed the divorce on Monday, but wouldn’t give any details.

The China Daily quoted Lee’s lawyer, Qi Lianfeng, as saying that the court’s acknowledgement of the domestic violence will encourage more women “to protect their rights in a legal way.”

Lee said she would continue to live with her children in China because her daughters have been educated here, the China Daily reported.