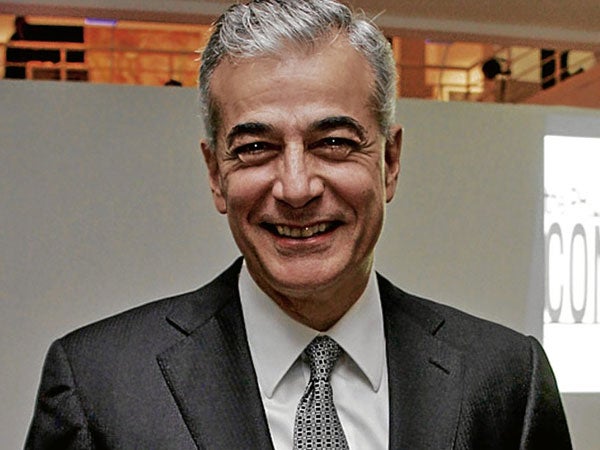 Jaime Zobel de Ayala had just been to Davos, but when he walked into the Metropolitan Museum of Manila, he looked fresh and energetic.

Socially selective Jorge and Stella Araneta not only made an appearance but stayed for the dinner with good friends and traveling companions Lani and Conchitina Bernardo and Bobby and Olivia Romulo.

They joined Chuching and Marge Tambunting, who were also among the early arrivals at the Met 2013 Gala Night for the opportunity to walk through the exhibit on the second floor.

While it may have been the years that measured SyCip’s pace, other art enthusiasts also moved slowly, pausing to have their moment before an Onib Olmedo or a J. Elizalde Navarro.

Joanne de Asis Benitez and Jimmy Laya lingered over one or another painting or sculpture.

Paulino Que, quietly taking in the works, was among the collectors, artists and institutions that had magnanimously loaned pieces for the Met exhibit.

Elements of a fine evening

The permanent exhibition, “The Philippine Contemporary: Scaling the Past and the Possible,” was a major attraction of the invitational event.

The event was organized by the Metropolitan Museum Foundation board of trustees, specifically board members Irene Martel Francisco, Doris Magsaysay Ho, Mercedes Zobel with Ricco Ocampo.

Board of trustees chair Butch Campos acknowledged the generous response of sponsors and donors of the museum before Kai served up courses accompanied by LVMH wines—Terrazas Reserva Cabernet Sauvignon 2008 and Reserva Chardonnay 2008.

The fundraising dinner was part of a collective effort by advocates of Philippine art and culture to make the Met a truly world-class museum.

Board president Tina Colayco thanked the committee members in her brief remarks after the Apple-Sampaguita Sorbet was served in Japanese tea pots.

Guests were seated at long tables draped in gray which ran the length of the ground-floor gallery.

The Jazz Quartet at the lobby and Argentine music on the accordion at the Gallery gave way to Nuevo Flamenco’s contemporary sound during the plated service.

The modulation was respectful of social intercourse to allow Baby Fores and Nene Quimson decent conversation, with the guitar, bass, flute and kahon playing in the background.

Gala committee members Olivia Campos and Fe Rodriguez were seen going around greeting friends and ensuring they were well attended.

There were intervals between the Pan-Seared Chilean Sea Bass and the Akamiso Braised American Angus Short Ribs to soak in Emmanuel Garibay’s oil-on-canvas “Masa” or Ronald Ventura’s intermedia “Basic.”

Artworks surrounding the dining set-up stirred another sensibility, adding to the pleasures of degustation. It was a younger set of artists on the walls but even the tablescape was a venue for new and current expressions.

Leeroy New’s plastic coils build up into other-worldly forms with spore-like tendrils in luminous colors. Set as centerpieces with plants and hollow blocks, it was an art statement inviting discourse.

Yet even art philistines might have been provoked to react, especially when performers, wrapped in the same glow-in-the-dark medium, emerged to cavort on the aisles, pleading plaintively to touch them.

It was a masterstroke to invite the generation of Jesse and Patrick Maxwell to an after-party.

The young people had begun to mill in the bar area separated from the gallery by a wall.

Tim Yap and Cristalle Henares enjoined the patrons of art, who were finishing up their Red Velvet Crepe Cake, to stay for the next part of the evening which some of their children had come for.

While sponsors like Ben Chan and Vicki Belo could relate to the techno and house music that replaced the earlier sounds, others like Arturo and Tessie Luz chose to walk the red carpet out into the waiting chauffeured cars.

Departing art cognoscenti waved at each other, leaving the arriving 20- and 30-somethings to find their own space at the museum to the spins of Kat Razon.

Anna Isabel C. Sobrepeña is the editor in chief of Lifestyle Asia.