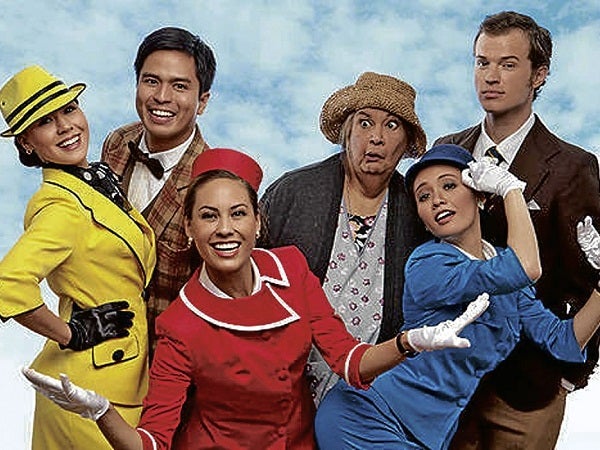 “If you love two people at the same time, choose the second, because if you really loved the first one, you wouldn’t have fallen for the second.” Words of wisdom from the great living icon Johnny Depp, his perhaps most-shared and retweeted quote in social media lately.

But the rush, the thrill, the joy of juggling one’s time between two people sounds like a cliché already.

For French architect Bernard Whitford, the main character in Repertory Philippines’ hilarious production of “Boeing Boeing,” the ideal is three.

And for him, it’s not just any other lonely babe one picks up in a bar. Bernard’s girlfriends are three gorgeous flight stewardesses.

There’s the American knockout Gloria of TWA, the voluptuous and intense German Gretchen who flies for Lufthansa, and the petite Italian Gabriella who works for Alitalia. Bernard manages to juggle his time among the three simply by knowing their flight schedules with mathematical precision.

The golden rule is, the three must not be at the same place—specifically his house in Paris—at the same time.

Bernard’s household is tended by his loyal French maid, Bertha, who has mastered the gruelling task of serving the three girlfriends.

Then Bernard’s best friend from the province, Robert, comes in and gets happily entangled in the web. But the real complications arise when a storm leads to canceled or delayed flights, and the three girlfriends need shelter in Paris. What’s a happy roué to do?

The story, written by French playwright Marc Camoletti, takes place in the early 1960s, a time when cellular phones, tablets and the Internet were mere subjects in sci-fi comic books, and the concept of keeping tabs via, say, texting was nonexistent.

In Rep’s production (ongoing until Feb. 17 at OnStage Greenbelt 1), Bernard is played by American actor David Bianco, remembered for his sterling performance of a gay Christian in Rep’s year-opener, “Next Fall,” last year. His fumbling, naive friend Robert is played by Topper Fabregas, who has been very effective in playing delightful sidekicks in many a Rep comedy (“Shakespeare in Hollywood,” “Leading Ladies,” among others).

Fabregas actually steals the show with his comic timing; he brings the house down at one point when he shows how the phrase “It’s not impossible” could be the most effective pick-up line.

Gabriella is played by Giannina Ocampo, whom we remember as the hilarious, skating buxom bimbo in “Leading Ladies.” If our concept of an Italian babe is Monica Bellucci, Ocampo is far from it, because hers is more of a petite, lithe and delicate lady. But one can’t say she’s miscast as Gabriella, because she manages to seduce Bernard and the audience with her well-studied approach to the character.

Gretchen the German is played by Carla Dunareanu, whom we recall from “The Kitchen Musical.” (She’s also known hereabouts as the girlfriend of pop singer Christian Bautista.) Her handling of a very intense, almost Viking-like Gretchen has the audience in stitches.

The American babe Gloria is played by Filipino-American Jennifer Blair-Bianco, the real-life wife of David.  Though she is a natural seductress on stage, being tall, statuesque and playful, we thought initially she could have been the more credible Italian girlfriend (again, think Monica Bellucci). But playing the American and being a New Yorker in real life, Blair-Bianco is a cinch for Gloria.

The French maid is played alternately by Baby Barredo and Joy Virata. While Virata’s handling of the haggard househelp is as hilarious, watching Barredo’s performance is something to brag about to friends. With her seemingly perpetually raised or fused eyebrows, Barredo easily reminds us of our grumpy but lovable grandmother or spinster aunt who’s always there to protect us.

Barredo, Rep’s artistic director and co-founder, has kept herself in the background these past years. Thus, it’s a rare treat to see her on stage, and if only for that, “Boeing Boeing” is a must-watch.

Miguel Faustmann’s direction of this Rep comedy assures the audience a two-hour laughing fit. “Boeing Boeing” is one high-spirited piece of comic therapy.