This Valentine, instead of a movie date–why not a play? | Inquirer Lifestyle ❮ ❯ 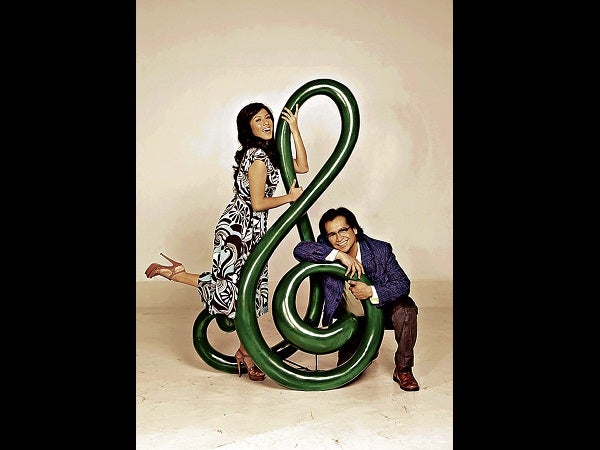 This Valentine, instead of a movie date–why not a play?

If Valentine’s Day means the usual dinner-cinema-coffee date, consider watching a play or musical. There are several shows with light-hearted themes ongoing on Valentine’s weekend. Here’s a list of feel-good productions that could set a warm and fuzzy mood for you and your special someone.

“They’re Playing Our Song” tells the story of composer Vernon Gersch and his relationship with quirky lyricist Sonia Walsk. It’s a poignant and witty musical comedy based on the real-life romance between Marvin Hamlisch, the musical’s composer, and Carol Bayer Sager, lyricist. Book is by Neil Simon. The New York Post described the musical as “full of good humor, hilarious jokes, and witty, pointed characterizations.”

The Manila run is presented by 9 Works Theatrical and stars Nikki Gil and Lorenz Martinez. Director Robbie Guevara said during the recent press launch in Peninsula Manila that the musical is very relatable, and is for “people who have fallen in love, are in love or afraid to fall in love … It’s not just for adults. Everybody who has gotten attracted to someone, whether a teenager or a kid, can watch it.”

Added Guevarra: “Those who are in a relationship but keep on fighting, those who have crushes but are ignored, will appreciate this musical.”

Get googly-eyed and kilig as Gil sings “Fallin.’”

Repertory Philippines, meanwhile, presents the story of a playboy who has promised marriage to too many girls.

“Boeing, Boeing” is laugh-out-loud comedy set in the 1960s. It is the story of Bernard Whitford, a Parisian architect who keeps three fiancées—all of them hot flight attendants. Trouble starts when the American, Italian and German jetsetters change schedules and Robert, Bernard’s friend, gets confused in the cover-up. Bertha, Bernard’s loyal househelp, also gets entangled in the romance riot.

The classic farce by French playwright Marc Camoletti was translated into English by Beverley Cross and Francis Evans. We love the sexy lines, Bertha’s comic timing, the retro costumes, and did we mention the girls are hot?

The Philippine Educational Theater Association (Peta) “D Wonder Twins of Boac,” a modern adaptation of “Twelfth Night,” William Shakespeare’s comedy of errors, begins its run this weekend. It is written by Rody Vera and directed by Peta artistic director Maribel Legarda. Music is by Jeff Hernandez.

The play tells the story of poor but talented twins Viola and Bastian, played by Cris Villonco and Chrome Cosio, and how they get separated as kids, thinking the other one has died. Follow their interconnected adventures as they get involved with the crazy characters of the Philippine film industry in the 60s, and how they pretend to be someone else as a “star” during what is regarded as the first golden age of Philippine cinema.

Villonco entices the audience with her singing and snappy delivery. Watch out for her “bed scene” with coactor Sharmaine Centenera-Buencamino, who plays the cougar Doña Olivia Nepomuceno.

But why Boac? “It sounds mysterious,” Vera explained during the press preview at the Peta Theater Center. “I thought of using Mindoro or Marinduque in the title, but who really knows what’s going on in Boac?”

Choreography is by Carlon Matobato, costumes by John Abul and lighting design by Jon Jon Villareal. The set design by Lex Marcos makes use of the full stage, including the audience entrance, giving the production an interactive feel.