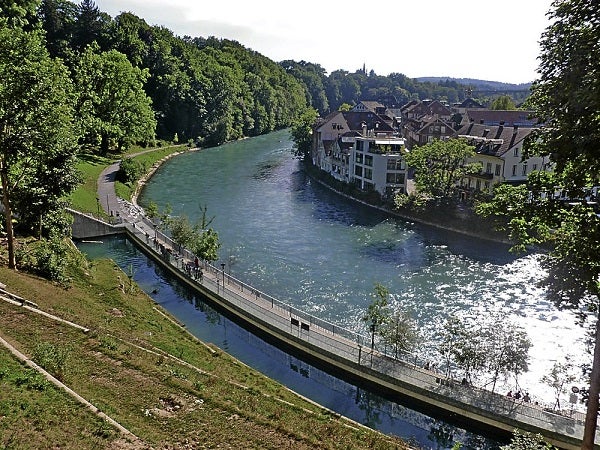 ‘The hills are alive’–with beautiful views and Filipino voices

On July 29, I flew to Zurich where I was met at the airport by Helena, head of the Asia Desk of the Swiss Catholic Lenten Fund (SCLF), our partner for about 20 years at the Institute of Women Studies. They took care of the airfare for my sabbatical trip all over Europe.

Helena gave me an 18-day transport pass which is valid for all transport in Switzerland, by bus, train or ship. I went to Wallis to join two friends, Antoinette (predecessor of Helena) and Barbara (former IWS graduate).

Barbara has a beautiful chalet in the Alpine mountains. The view was indescribably beautiful. We were 1,600 meters above sea level, but we still looked up to higher mountains with peaks covered with snow. We had a routine—after getting up, 30 minutes of meditation, 15 minutes of shibashi (a form of exercise), breakfast and then work on editing SCLF’s English translation of a book on shibashi.

Then we went down to Lucerne. I had to go to Basel for a day to have lunch with some women theologians. The weather was so warm, people were swimming in the Rhine River. Another time I had a round table discussion with Filipino women in Bern. Most of them are professionals, married to Swiss men. They gave me a donation, but I asked permission to give it first to Philippine flood victims.

We walked along the Aare River, and watched bears at a sanctuary (Bern got its name from bears). It is the most beautiful city in Switzerland and is also the capital. It is also the home of the big Swiss banks.

Annie Hefti, whom I have known for 20 years and who is a psychologist and counselor, let me stay at her home in Emmental, home of the Emmentaler cheese and the Kambly, a famous factory of biscuits dating back to the 17th century. Beautiful farmers’ homes with flowers dot the meadows where you felt like dancing and singing, “The hills are alive with the sound of music …”

The farmers here are rich, and each usually has three houses in one compound—for the family, for the parents and for storage. Annie pointed out one hill where she goes to meditate or read a book. She also brought me to see how the Kambly cookies are made and where the Emmentaler cheese is produced.

On another day, Helena and two SCLF staff took me on a cruise on Lake Vierwaldstaettersee.  All around were mountains, and the water was a clear green in color. We docked at a small port, Vitznau, where we took a train that went up the Rigi Peak.

At the top there is a pathway to the highest point, so we took a leisurely walk to get to the peak. One of the women, Romana, brought her two kids who ran ahead of us. Once in a while the little boy would pick a flower or a stone and give it to each one of us. From the top we had a panoramic view of Lucerne and other neighboring towns and villages.

Helena arranged a special day at the SCLF office, where I was interviewed by two women staff members. The questions were very interesting—about my work with women, the Philippine situation, matters related to the Church, and my spirituality. They based their questions on my book “Nun-sense,” which they said they enjoyed reading. The SCLF president thanked me for coming and said he was looking forward to a continued partnership. (We have been partners for 21 years!)

On Aug. 14, the day before I left for Austria, I was interviewed on the National Radio News Program which was aired at 1 a.m. on Aug. 15. By that time I was already on the plane to Vienna. After the radio taping, a journalist from a women’s magazine, Anabel, likewise interviewed me. I have since received very favorable feedback about both interviews.

Before leaving Switzerland I had a telephone conversation with Hans Kung, who gave a talk at the Lucerne Festival. We were together for eight years as international editors of Concilium. We talked about the future of the Church, and also about his new books. He said we should study the 11th century to understand our problems in the Church today. I intend to do just that.

I arrived in Vienna on Aug. 15. My former student, Malou Sotto Reininger, and her husband met me at the airport. She made arrangements for me to meet with funding agencies.

Malou also arranged that I meet the Philippine Ambassador, Lourdes Yparraguirre. She was very gracious, giving me one-and-a-half hours of her time. She called her consul and attaché to help me meet the heads of Filipino organizations, and even gave me 100 euros as contribution for the hospital. She also told me that her office will put our project proposal on their website.

Her attaché arranged for me to attend the meeting of the leaders of the Filipino Association. The ambassador accompanied us all the way to the elevator. Malou said she was surprised I got such a royal welcome, and surmised that they Googled me beforehand.

In between, Malou and her husband took me on a tour. We went on a Danube cruise which showed the important buildings of Vienna on both banks. We also went to the Laxenburg—not Luxembourg, but the castle of Emperor Karl in Vienna. It is surrounded by lakes and beautiful meadows, and we went on a mini-tourist train to go around the vast grounds of the castle.

We went on a four-day trip to the Czech Republic.

We first went to a place called Kremeriz, where we met with Vicky Sevilla, who is married to a Czech but lives in Switzerland. We had a lovely time reminiscing about their Scholastican days. And imagine, while walking along the village to see some ancient churches, the three of us began singing, “Let’s Cheer for St. Scholastica’s” and “Come Loyal Benedictine Children” right in the middle of the street.

We went to a city called Brandeis, where we heard Mass at a pilgrimage shrine with a black Madonna, which was supposed to have been found by a farmer while plowing the field way back in the Middle Ages. There we met with Milan and Nina Novak, who are in charge of a castle, the summer palace of Emperor Charles.

I have to tell you that Irmfried, the husband of Malou, is of the nobility, and is the secretary general of an association in charge of working for the canonization of Emperor Karl, who has already been beatified. The Novak couple also belong to this association.

Then we went on to Prague, one of the most beautiful cities in Europe. Of course the very first place we visited was the church where the Infant Jesus of Prague is enshrined. (Nina told us that a statue of the infant, which is now in Palma de Mallorca, is called Infant Jesus of Cebu!)

On a side altar of the church, there is a painting of the Our Lady of Barangay. From there we went to the famous St. Vitus Church, which has beautiful stained glass windows.

We also went to the famous Charles Bridge across the river Moldau. We climbed up the terrace, which gave us a magnificent view of the whole city of Prague.

We had no time to go to the museums because we had to go home to Vienna. On the way back, we visited two castles that used to belong to Irmfried’s great grandfather, and which were confiscated by the communists. One is now owned by a German businessman, and the other a home for the aged. Irmfried is studying the possibility of retrieving them, since he has all the documents showing that these belonged to his family.

On my last day in Vienna, I met with Carla of Dreikonigsaktion and Eva of the Catholic Women’s Association. We had a two-hour meeting about many things. I told them that our project is ideal for their working together, since the hospital will primarily have a maternity ward (for the Women’s Association) and a pediatrics ward (for the Dreikonigsaktion, whose priority is projects on children because its money comes from the custom of Austrian children begging on the Feast of the Three Kings with costumes and musical instruments).

I had lunch with Ami, a friend of Malou, who is also serious about helping us. It was so hot we decided to eat ice cream sitting near the fountain at the side of the famous St. Stephens Cathedral. The street is called Graben because in the Middle Ages, it was the mass grave of all those who died in the plague. Now, of course, it is a shopping center with fashionable shops on both sides.

In the afternoon, Malou and I attended the meeting of the leaders of various Filipino organizations. There was one from Pangasinan and one from Cavite. Before their meeting, they gave me a chance to explain our project. They promised to take it up at their meeting and include it in their fundraising program.

(Next: From Stockholm to Rome)