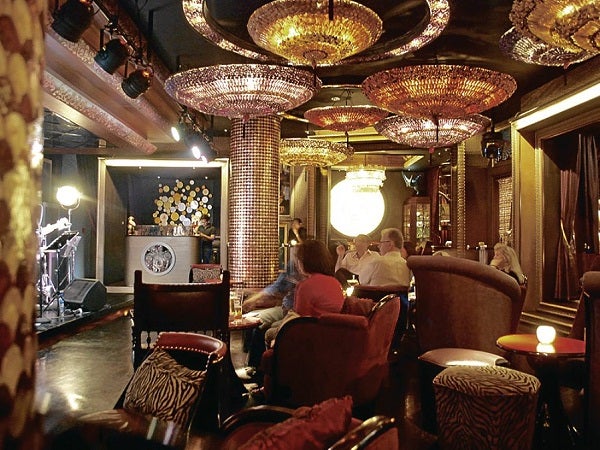 Mood and atmosphere enhance the music

The old Erap joke about the value of mood and atmosphere (“Magkano ba ang ambiance?”) takes on new meaning when one enters Salon de Ning, a club on the ground floor of The Peninsula Hotel in Makati City.

We’ve been here a couple of times the last few years, but it was only recently that we truly appreciated the effect its décor had on patrons.

On a Monday night, the band formerly known as Acoustic Jive, now renamed Travelin’ Lite, is onstage at Salon de Ning. Its frontman, Romy Jorolan, leads the group with an instrumental, Antonio Carlos Jobim’s “Wave”—prompting our friend to utter, “Oh no, sounds like we’ll get bored by tired old covers.”

But Jorolan moves on to do impressive vocals on Sting’s “Fields of Gold” while playing his acoustic guitar. Another cover follows, the Beatles’ “Here, There and Everywhere,” before Jorolan calls on the band’s female lead singer, May Bayot.

She renders John Lennon’s “Imagine” in an R&B mode, and then Carole King’s “It’s Too Late” almost note-for-note, though it stands out when guitarist Danny Trias adds some adventurous solos. The other band members—drummer Rene Tengasantos, keyboardist Ernie Magtuto and bassist Bobby Fider—play it cool, but with an ear for the slightest chord change to allow for a bit of improvisation.

Not in her element

By this time it becomes apparent that Bayot is not exactly in her element, her face quite somber, her eyes cast downward with barely any contact with the audience. We talk in whispers, wondering what seems to be bothering this once bubbly bundle of a powerhouse singer, who’s also known to have two other talented singers in the family, one of whom is Lani Misalucha.

It’s also at this point when our attention wanders to the five mini-salons within the club, each one bearing a different theme: a viewing deck of the Empire State Building with King Kong peering from the window; a boxing room replete with gloves, punching bags, a poster of a boxer and a vintage TV set showing old reels of a boxing match; another room showing off an extensive shoe collection; still another room displaying fashionable apparel; and the last one bigger than the rest, with an old gramophone signifying that this must be the “den.”

These rooms serve the purpose of receiving guests who want privacy and have discussions without bothering the show and the audience sitting in the main room, whose ceiling is adorned with a colorful array of inverted parasols that look like lamps made in Shanghai.

When the band plays “Can’t Buy Me Love” with blues, reggae and jazz infusions, we look at the ceiling and smile at the thought that ambiance, indeed, is everything in a hotel club, because it enhances the music on a visual level.

Of course, it helps that Salon de Ning has excellent acoustics, which enables us to enjoy the music while a group of teenagers laughs themselves silly beside King Kong without being a nuisance.

After hearing 22 songs played live and consuming six San Mig Light beers with unlimited free chips and peanuts, we ask for the bill, which amounts to P1,500. That’s how much good ambiance costs for some three well-spent hours.