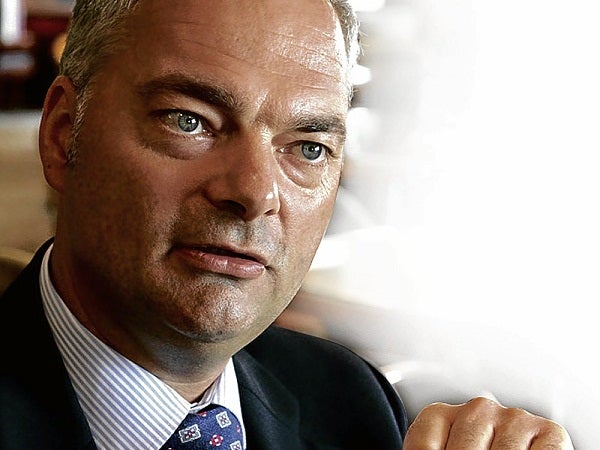 Jumpstarting the regeneration process to achieve longevity, glowing skin and youthful energy are just three of the claimed benefits derived by patients at Villa Medica.

The Germany-based “holistic” clinic specializes in fresh-cell therapy, a form of stem-cell treatment sourced from organs and tissues of unborn lamb.

Such claims may sound too good to be true, until you see the likes of former President Joseph Estrada, former first lady Imelda Marcos and Senate President Juan Ponce Enrile strutting about and plotting their next political moves like they’re in their prime.

Except for Enrile, Marcos and Estrada have nearly endorsed the clinic in Edenkoben, an hour’s drive south of Frankfurt, by agreeing to have their pictures and brief testimonials used in a Villa Medica brochure.

Marcos reportedly started having fresh-cell therapy injections in 1969, less than a decade after Villa Medica opened its doors for business in 1961. But the acknowledged father of fresh-cell therapy, Dr. Paul Niehans, broke ground and started his research in 1931.

Although fresh-cell therapy claims to help improve the condition of diabetics and kids afflicted with autism and Down’s syndrome, to name a few, it doesn’t promise a miracle cure for life-threatening diseases such as cancer. And since the clinic’s approach is “organ-specific,” it doesn’t offer patients a one-size-fits-all therapy.

“Regeneration is not a passive thing,” said Huertgen. “We need the patient as an active partner to make the regeneration work. His body should also be up to it. It’s important that he sends us all the requirements like his medical history and blood tests for us to know if he’s an ideal candidate for the treatment.”

Every program is tailor-made depending on the organ that needs to be addressed. Human beings, like all mammals, have 220 organs and tissues, said Huertgen. Except for skin and joint rejuvenation, where stem cells are injected directly on the area that needs improvement, each tailor-made cocktail of fresh cells geared, say, for the heart, liver or intestines is injected through the patient’s buttocks (intramuscular).

These injected stem cells find their way to the organ they were programmed to repair. A typical therapy program includes up to nine injections (the number could increase depending on Huertgen’s assessment of the patient).

Simply put, stem cells needed to address the heart are derived from the lamb’s heart. The same goes with the liver, intestines and other organs of the body.

“And since fresh-cell therapy is regenerative in nature, you don’t see and feel the results immediately,” Huertgen added. “If you want an overnight effect, you have to go to a surgeon. He can do an invasive procedure to address your beauty concerns.”

Although not a few patients swore they felt and looked better right after the treatment, it takes a few months, depending on the individual’s response to the treatment, for results to start kicking in.

Over the years, a growing number of wealthy Filipinos have availed themselves of the four-day, three-night treatment by flying to Germany. Last year alone, the clinic attended to 350 Filipinos.

Once accepted, the patient undergoes another series of testing and interviews at the clinic before receiving the therapy. As a bonus, a typical package costing 15,000 euros (excluding airfare) includes airport limousine transfers, sightseeing and shopping tours. But all the side trips have to be done before the treatment.

Once the therapy starts, the patient is required to rest while nurses attend to him round-the-clock to check on his condition, including any signs of allergies. Based on Huertgen’s experience, common side effects, ranging from red, itchy skin to rashes, are pretty minor. Huertgen said he has yet to come across cases involving patients developing major infections.

“After the treatment, the patient stays in bed for at least 30 hours so we could monitor him while his body optimizes the treatment,” he added. “He can immediately fly home soon after.”

That’s why it’s important to administer the therapy in a sterile and controlled environment, and not just in any clinic or branch abroad, said Huertgen. Villa Medica is practically a hospital regulated by the German government, albeit with some of the trappings found in a five-star hotel.

Patients are discouraged from staying up late and doing anything beyond “light” activities for a week. Huertgen also advises them to eat healthy and avoid such “toxins” as smoking and drinking alcohol.

Apart from providing patients four weeks’ worth of supplements, Villa Medica’s customer-care department will be communicating regularly with them to address any concerns they might have and remind them of follow-up treatments.

“And since it’s a holistic approach, we’re also working with local doctors so patients could have follow-up consultations,” said Huertgen. “It’s not just about going there every year for four days, and getting lost the rest of the year.”

As Huertgen explained it, fresh-cell therapy is based on the fact that as we grow older, our organs and tissues also start to deteriorate. It’s simply how nature works.

“What is age? To be more specific, what is the difference between a newborn and an old man? It is in the function of their respective tissues and organs.”

Apart from telltale signs such as wrinkles, sagging muscles and gray, thinning hair, the heart, brain and the rest of the body’s organs and tissues also age.

Something as routine as regeneration, a necessary function that keeps every living being alive, becomes slower, less responsive and more “chaotic.”  As chaos eventually wins, said Huertgen, we die.

The rebuilding cell responsible for regeneration, he added, is none other than the stem cell. Again, there’s no single stem cell, but a series of stem cells that each addresses a specific organ in the body.

And since regeneration needs time and an active “partner” to make it work, Villa Medica refrains from addressing certain cases like people looking for a last-ditch attempt for a cure.

“We refuse not because we can’t do the treatment on them per se,” said Huertgen. “But because it makes no sense.”

In cases, for instance, involving HIV-positive patients, Villa Medica attends to them once their condition is stabilized. It has no room for full-blown AIDS cases, which Huertgen considers an “end stage.” The same applies to people diagnosed with acute forms of cancer.

Huertgen cites the case of a long-time German client, a retired businessman “nearly 100,” who goes to the clinic regularly. The fellow still drives around town in a sports car with his prized trophy, a much younger girlfriend.

In the case of children with Down’s syndrome, a condition encoded in their genes, there’s no way to correct or eliminate genes responsible for such a condition. What Villa Medica does is address a gene defect to help enhance metabolism in the brain, which, in turn, leads to better cognitive functions.

As far as Huertgen is concerned, no stem-cell therapy can alter or enhance the looks or physical appearance of a special child.

Villa Medica doesn’t offer parents cure for their children’s autism, either. What Villa Medica promises is to help boost the autistic person’s brain development and immune system to help him control and manage such problems related to digestion and all sorts of allergies.

“These problems are all signs of weak immunity,” said Huertgen.

The jury is still out as to what really triggers autism, but its growing incidence (one in 50 boys today in the developed world is said to be diagnosed with some form of autism) has led Huertgen to believe that it has something to do with the current environment and people’s lifestyles.

“There are a few study groups in Canada and Israel who manage cases of autism with immune therapy. Results have been very encouraging.”

Villa Medica’s founder, Dr. A. Gali, was a distinguished student of Dr. Niehans, the supposed inventor of what he described then as “freshly harvested liquefied organs and tissues.”

“Our founder learned it directly from Niehans, and what we’re doing today is based exactly on the principles of what Niehans did in the 1930s,” said Huertgen. “For me, fresh cell therapy as advanced by Niehans is the mother of all of cell therapies.”

Of all the animals out there, Villa Medica chose the fetus of a pregnant sheep because of the animal’s hardy characteristics.

In New Zealand, sheep number in the millions and are out in the fields day and night with hardly any incidence of cancer, heart attacks or strokes, said Huertgen. The same conditions don’t apply to, say, pigs, a sensitive animal prone to strokes and heart attacks.

And because of humans’ constant contact with such domesticated animals like dogs, cats, chickens and even mice, we have developed certain antibodies in our blood that could cause allergies and even reject any cell or component coming from these animals.

But why use an unborn lamb instead of its bigger and older baby version?

Because unlike a baby lamb, an unborn lamb (which is aborted from its mother’s womb), having had no contact yet with the environment, is free from any “antigen information” that might interfere or clash with the patient’s own antigens and antibodies.

“Since the unborn baby lamb practically has no ‘information’ on the surface (outside world), there is no risk of rejection once we inject its cells into a patient,” said Huertgen.

Indeed, on the surface, the science behind fresh-cell therapy seems too good to be true, even murky, to not a few doctors and scientists themselves. A book, let alone an article, is probably not enough to satisfy skeptics.

But if you’re as old and as rich as Enrile and have nothing to lose but time to gain more quality time on earth, you’re more likely to give fresh-cell therapy a shot.