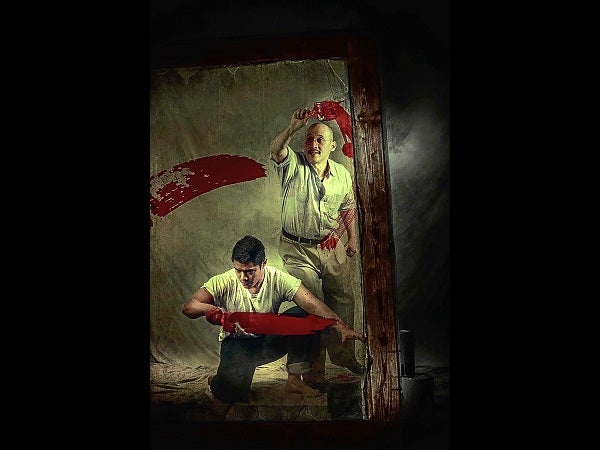 Seeing ‘Red’–art, passion and madness in a brilliant play

RED” by John Logan is a play that won almost every major theatrical award in London when it premiered in 2009, then repeated the feat in New York when it opened the following year.

This brilliant play (Logan also wrote the screenplays of “The Last Samurai,” “Gladiator” and “Any Given Sunday”) speculates about one of the most enigmatic incidents in the 20th-century art world.

In 1958, the abstract expressionist painter Mark Rothko was commissioned, for an astounding sum, to paint a series of murals for the cutting-edge Seagram Building on Park Avenue. After completing the works, he decided to keep them and returned every penny of his commission. Years later, he donated the works to the Tate Gallery in London and committed suicide.

The play introduces a fictitious assistant who engages Rothko in arguments and conversations that ultimately make us understand why he might decide to withdraw his work from the commission.

Joaquin Valdes, an up-and-coming director of movies and commercials, and I are sitting around after rehearsals analyzing what worked and what didn’t. The conversation inevitably drifts to our perceptions of the play and we begin to analyze each other’s personality. We decide to interview each other as an exercise in building onstage chemistry and rhythm.

BG: So we’re doing this play about art. What is art, anyway? And why is it so important?

JV: I think we’ve come to an age where ART is really more dependent on the receiver than the producer. Whatever message ART evokes or communicates is best interpreted by the ones viewing it. An artist can never have full control over his work once he allows another person to view it. This didactic is evident in the play. Art becomes that constant tension between intention and interpretation.

BG: When and how did you decide to be an artist? How meaningful is the theater to you?

JV: I grew up in the theater, got to work with and witness so many wonderful actors and directors. Life was just so much more magical and imaginative. It allowed me to create, to express and to reflect. But the dullness of reality really settles in as you grow up. Even Peter Pan had to grow up.

So I felt that I needed to succumb to the gray routine of maturity. It was in the middle of college when I realized I was indeed not called to be behind a desk and actually called to create. I shifted from Architecture to Film on my fourth year at UP and it has been the best decision since.

BG: It’s our first time to work together. Are you having fun?

JV: I loved the play and when you first asked me to read, it meant so much to me. I saw myself in both Ken and Rothko. I loved the theme of father and son, mentor and apprentice, master and student. I don’t usually do plays anymore since my schedule as a director is really quite insane, but “Red” was in my personal bucket list.

Working with you is actually quite frightening, not because you’re a scary director or a difficult actor. What frightens me are our similarities. When you begin talking about “art,” the meaning of it, how it transcends, you get impassioned the same way I do. There’s really a lot of art-imitates-life-imitates-art in this process and, although you’ll never admit it, you actually do become my Rothko in many ways.

But most of the time, it’s the other way around, it’s like I’m Rothko and you’re Ken. You have a sense of wonder, experimentation. It’s nice to witness that.

BG: Are you Rothko or Pollock? Dionysian or Apollonian?

JV: I’m really not one or the other, but a union of both.

BG: Acting or directing or writing—what would you rather do?

JV: Directing. No doubt. I get to work with the most magnificent actors and writers

BG: How do you think your generation differs from mine?

JV: Things are just too easy and user-friendly. My generation finds thinking a chore, when previous generations found it a pleasure. Jokes were smarter, wittier and more intelligent. But now, there’s no more subtlety, scrutinizing or studying. It’s all spoon-feeding.

JV:  Why did you choose “Red”? What is its relevance today?

BG: “Red” is about an artist who tries to practice his art with purity, without compromise. In this day and age when speed and expedience are given premium over vision, you’d be crazy to pass up the chance to play someone as stubbornly intransigent, as maddeningly exasperating as Rothko.

But more than just the role, the entire play itself is brilliantly written. Logan refuses to fall prey to easy platitudes and sentimentality. Instead he explores his themes with a trenchant pen and a deep sense of commitment, oftentimes with a clinical detachment that is unnerving.

At the same time, there’s so much fireworks going on. I have not seen so much passion onstage without there being a “love” angle—it can literally take the audience’s breath away.

JV: The play goes into very deep discussions on art, comparing generations and movements. How does this speak to you as an artist?

BG: If I had even an iota of insecurity in me, I’d look at you and think I’m being supplanted in my middle age. Luckily I’d come to accept at a very young age that obsolescence is part of life. As is wisdom. I look forward to the day when you direct me and I sit at your foot, mentored by you.

Going back to “Red”—I’ve always been an art enthusiast. I even considered being a visual artist at one point. So I do have some appreciation of the evolution of the artistic movements referred to in the play. Here’s an unsolicited answer to an unasked question: My favorite artist for a long time was Modigliani. Now that I’m older? Rothko, hands down.

JV: You chose to do “Red” with a staff of students from CSB and in the SDA Theater. Why did you go this route?

BG: Who better to infect your passion with than those who are ready to go forth and be your army of theatrical proselytizers? If we don’t get much of an audience (fingers crossed), we will at least have touched the minds and hearts of those who possess possibility, and therefore bravery.

I am grateful that De La Salle College of St. Benilde’s School of Design and Art is producing the show with us. They own one of the most enviably gorgeous theaters in the city and they are visionary enough to want to carve out a seal of quality for their series of performances, The Vito Cruz Project.

JV: Mark Rothko was a very dark man with a very tragic life-view. How similar or different are you with Rothko?

BG: I don’t have a tragic life-view, although like all human beings I do experience lows from time to time. The two things about Rothko I can say I can relate to are his penchant for analysis—very critical analysis. And his pedantry, which almost approaches demagoguery. But then, aren’t all impassioned people demagogues?

BG: It’s a chance to bring ideas to life. The idea that if the world is to move forward, purists are necessary. That geniuses, as unattractive as they can be, are  necessary. That theater as a medium of entertainment and edification is necessary.