Censored in the temple of the Lord: Who was Carlos Celdran, really? | Lifestyle.INQ ❮ ❯ 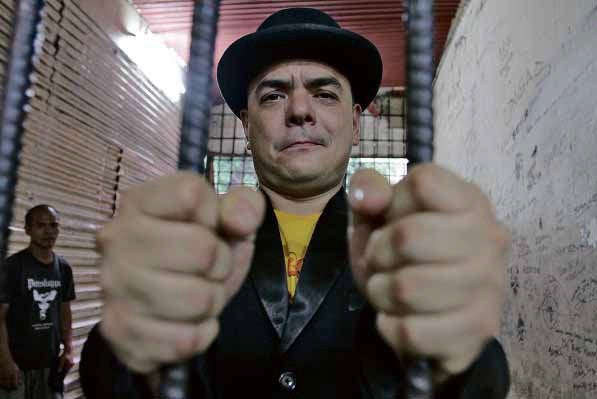 Censored in the temple of the Lord: Who was Carlos Celdran, really?

Nine years ago, on a late afternoon, tour operator and performance artist Carlos Celdran was arrested for reportedly interrupting Mass in Manila Cathedral to stage a protest against priests and bishops interfering with the passage of the Reproductive Health Bill.

Dressed as National Hero José Rizal and standing before the altar, Celdran raised a placard that read “Damaso.” He was taken away by the police, but not until after he had shouted to the clergy present: “Stop getting involved in politics!”

That evening, Msgr. Nestor Cerbo, rector of Manila Cathedral (Basilica of the Immaculate Conception), filed charges against Celdran for violation of Article 133 of the Revised Penal Code, which penalizes acts that are “offensive to religious feelings.”

The following day, he was released from the custody of the Manila Police District after posting a bail of P6,000.

People who heard the news gasped, simmered or giggled. Even some of the faithful who sympathized with Celdran had reservations about his protest action. Freedom of expression can only go so far—do it if you dare, but not during the Holy Sacrifice of the Mass! Try doing that during service at a mosque and see if we won’t witness a beheading.

“First of all, it was not during Mass, it was not a liturgical service,” Celdran clarifies. “It was an ecumenical meeting of Catholics and non-Catholics where they were selling Bible. There were priests as well as laymen, each giving points of reflection. I waited for the person to finish, I genuflected before the altar, before I raised my placard.”

If he really wanted to hit at the sanctimony of the clergy, why Padre Damaso, who turns somewhat sympathetic toward the final chapters of Rizal’s “Noli Me Tangere”? Why not Padre Salvi, the real snake in the grass?

Celdran says he’s not anti-Catholic. He was a schoolboy educated by priests, in fact, and had a rigid Catholic upbringing.

“A super-super-super-sosyal school,” he says. “Many of its products have become show-biz, all sosyal, all super-sheltered. Life revolved around the village and the school—and I hated it.”

While still in high school, he found a job as a cartoonist for a business paper with an office in Manila.

“I was paid P50 per comic strip of four frames,” he says. “I commuted all the way from Makati to Port Area weekly to see [the late cartoonist] Nonoy Marcelo. That was how I knew all about Manila. Imagine being transported from Makati to Manila—it was like a time machine. The real journey began when leaving Makati, taking the bus to Taft, the LRT, then walking to Port Area, to deliver my strip. I was discovering Intramuros.”

Marcelo recommended him to the Samahang Kartunista ng Pilipinas, and he became its youngest member. Then he did T-shirt illustrations for a clothing store he founded with his sister and friends.

He enrolled at the University of the Philippines’ Department of Visual Communications.

“At UP, that was where I saw things,” he relates. “I saw my first marijuana, I saw my first lesbian, I saw my first farmer’s daughter. I was making lakwatsa in college. I explored Malate. I went to where the bohemians gathered, at Penguin, at Blue Café. I could not go back [to sheltered life].”

He transferred to the Rhode Island School of Design to major in Painting. Finding he was allergic to paint, he shifted and got a degree in Performance Art, graduating with honors.

In the mid-’90s, he lived and worked in New York, juggling jobs, from cheese-counter boy to fish-station boy, from production assistant of a performance group, to technical director of a dance company.

It was in New York where he witnessed the devastation of AIDS. That was what turned him into an activist for HIV/AIDS awareness, reproductive health, family planning.

On returning to Manila in the late ’90s, he worked as a set designer and director for Ballet Philippines and Actor’s Actors, Inc. He also volunteered for the Heritage Conservation Society, where he discovered his “talent for handling historical tours.”

In 2002, he founded his company Walk This Way, providing half-day walking tours of the heritage districts of Manila, from Quiapo to Intramuros to the Cultural Center of the Philippines, even overnight tours of Corregidor.

At around this time, he was working as consultant for arts and culture for Manila City Hall. He helped Mayor Lito Atienza create Baywalk and push for the pedestrianization of Avenida Rizal—which all came to naught with the change of administration.

His walking tours became popular only after five years. He says his influences and inspiration in his cultural activism are National Artist Nick Joaquin and writer Gilda Cordero-Fernando.

In the tour called If These Walls Could Talk, garbed in the Spanish-colonial attire of an ilustrado, he guides people around the Walled City while telling stories, singing, dancing, crying, doing magic acts.

In “Living la Vida Imelda!” he wears bell-bottoms and leads a tour of CCP while telling facts and fancies about former First Lady Imelda Marcos.

“It’s hard to do these tours,” he says. “I consider it as my yoga. I don’t party as much as I did. I do it 100-percent, like when people do golf, or when you go to church. My day is incomplete without these tours.”

Tour and performance have often blurred. From the temple of culture was only a step into the temple of God, and it was inevitable the scandal in the cathedral had to occur.

“I just stay outside San Agustin and tell the tourists to go inside if they want to,” he says. “As for Manila Cathedral, structurally damaged ’yun—but that’s not my fault.”

Last year, he was commissioned by Art Dubai Projects to perform his CCP tour as a one-man act in Dubai’s annual art fair. In the middle of his third performance, he was “interrupted by robed authorities [after doing] an imagined conversation between Imelda Marcos and late Libyan dictator Moammar Gadhafi.”

He says the morality police of Dubai must have misconstrued the conversation as an incitement à la Arab Spring.

They took him to the parking lot and reproved him, then into an office where he was questioned by security officials. Traumatized, he canceled the performance, but not until after covering his mouth with packing tape at his hotel’s lobby to protest the censorship.

(The uncensored version of “Living la Vida Imelda!” he will perform at Silverlens Gallery on Feb. 15-March 16, 7 p.m.)

An overlooked talent of Celdran is his accomplished art-making, which he does in his spare time. The artworks are done with paper cutouts shaped into mosaics and brushed over with paint. One collage evokes the look and color tonality of Julian Schnabel’s mosaic of porcelain shards.

Celdran says he is an advocate of random acts of beauty, such as doing flower arrangement or instant installation in the salon of his Malate apartment. “I believe one must do one beautiful act to complete a day.”

He is a bike enthusiast. He pushes for brown rice not only to support good health but also to help small farmers. “I don’t eat pork. Everything in moderation is fine.”

He has a farm in Nasugbu, Batangas, where he grows organic vegetables like lettuce and arugula. He has built a nipa hut there, where wife Leny is planning to put up a yoga studio. Monday-Wednesday is usually spent in the farm, away from the frenzy and madness of the metropolis.

In 2013, the verdict on Celdran’s case was given. He was found guilty and sentenced to one year, one month and 11 days in prison.

He had apologized to the Archdiocese of Manila, and the bishops said they had “forgiven him in the name of the Lord but not in the earthly realm.” Which made him quip: “As far as they are concerned, I can go to heaven but I have to go to jail first.”

He and his legal team are going to make an appeal at the Manila Metropolitan Trial Court (Branch 4) Monday afternoon, to reverse the decision and “hopefully to repeal the law—because it’s dangerous.”

He is aware it may take years before the case is over. “I may just go down as a footnote in history. Okay lang ’yun… and then I can go to my nipa hut.”

In a low, weary voice, he confides it has become harder for him day by day to believe that our connection to a Higher Being is only through the priests. There’s been a lot of confusion about the issue as many of the faithful, in fact, can’t even differentiate Church from clergy, not to say distinguish Church from church. “Anticlerical,” of course, doesn’t mean “anti-Church.”

Still, Celdran insists on the innocence of his protest action inside the cathedral.

“I wouldn’t have done it during Mass. I also know these things. Come on. I’m Catholic. If my plane is crashing I’ll pray ‘Hail Mary.’”