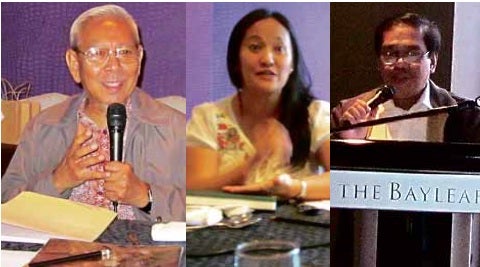 Gongs and bamboo musical instruments “are a celebration and renewal of our heritage as Asians and have been in existence for thousands of years,” according to composer and National Artist-designate Ramon P. Santos.

Santos, who had been designated National Artist for Music by both the National Commission, for Culture and the Arts (NCCA) and the Cultural Center of the Philippines (CCP), but whose name was unceremoniously yanked off the list by President Gloria Macapagal Arroyo in 2009—spoke before a press conference at the Bayleaf Hotel in Intramuros, Manila.

The press conference announced the First International Gongs and Bamboo Music Fest ([email protected]) to be held in Dipolog City, Zamboanga Peninsula, Feb. 16-22; and in Maasin, Iloilo, Feb. 22-26. There will be additional performances on  Feb. 27-28 at St. Paul University in Manila, University for Asia and the Pacific in Pasig City, and University of the Philippines Diliman.

The international festival is part of the Philippine Arts Festival in connection with National Arts Month. PAF is organized by the National Commission for Culture and the Arts.

The news conference was organized by the NCCA National Music Committee, Musicological Society of the Philippines (MSP) and UP Center of Ethnomusicology (UPCE).

“There will be 350 foreign delegates,” Dipolog information officer Robert N. Pinsoy said at the press conference. “We will spend P6 million for this event which coincides with the centennial celebration of the founding of our city.”

Italy was supposed to participate in the festival, but its representative was not allowed to join because an Italian was kidnapped in the south recently.

Santos, who is president of the MSP and executive director of UPCE, said: “The festival will also explore the changing and expanding breadth of sound structure and music, new and modern techniques of performers in other countries who have many musical instruments, some of which I have not heard.”

The repertoire, he said, will be “much varied.”

In Mindanao and the Cordilleras, gongs and bamboo music are still very much alive, the modernist composer noted. Maasin (in Iloilo) has native bamboo instruments, and Bohol has rediscovered a gong called bulibutkiking.

But in Bali, Indonesia, he hastened to add, gongs are still used to communicate with the spiritual world.

Thus, the festival “will be a renewal of our sensibilities to these sounds which some of us have forgotten and will lead to a better understanding of each other’s culture here in Southeast Asia and also in Korea, where they have gongs.”

The approach, Santos said, “is integrated, holistic, it represents our culture. I prefer our culture rather than banyaga (foreign).

He concluded: “The festival will lead to better understanding and cooperation, and transcend national boundaries. Perhaps we can return to a more celebratory environment of gongs and bamboo.”