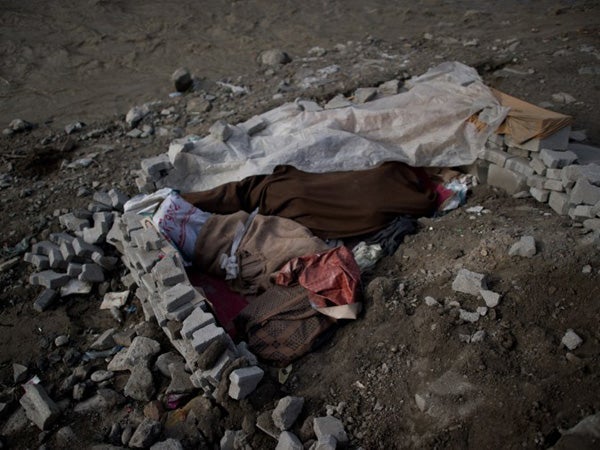 Two drug addicts sleep next to the Kabul River in Kabul on April 26, 2012. AFP FILE PHOTO

JALALABAD, Afghanistan – They play badminton, kick a ball around and huddle over computer games just like normal children.

Except that they are recovering drug addicts aged around three to 12, representing a growing proportion of drug users in war-torn Afghanistan.

In response, increasing numbers of rehabilitation centers are weaning such children off their addiction and giving them a new appetite for life in a country that produces 90 percent of the world’s opium used to make heroin.

While there are no statistics for kids, the rate of relapse is high for their parents, experts say.

For now two young girls, dressed in a blue uniform and playing badminton, and a group of boys playing football are all active and healthy – the total opposite of when they arrived.

“When I see them for the first time, the kids are depressed, unhappy. They don’t play actively, they don’t care about hygiene,” said care assistant Massouma Khatima. “They’re like ghosts,” added one of her colleagues.

The center, run by Afghan charity Wadan, which is partly funded by the United Nations, offers 25 children and 35 women the chance to get clean.

Those who suffer from diarrhea, constipation or headaches as a side effect from addiction are given medical treatment. More hardened addicts among the adults are treated with hydrotherapy – in this case mostly cold showers.

Marwa, 10, is one of the girls, who has recently recovered.

Now she dares to dream of becoming an engineer, a fairly remote prospect for a girl from a poor community where few women are educated.

“I’ve been taking sleeping pills since I was a baby… I was drowsy and feeling asleep. I always had headaches. I couldn’t learn. My friends were learning faster. They were also laughing at me, calling me ‘sleepy’,” she says.

“Now, I feel better, but not completely OK. I feel I can learn to play,” she adds.

Fazalwahid Tahiri, the center’s administrator, says that in the eastern province of Nangarhar, sleeping pills can be mixed with milk for kids. But children are more commonly given a highly addictive broth made from opium, doled out as a remedy for flu and stomach aches.

“Since opium is easily available, some don’t even think of it as drug addiction. They use it as a pain killer,” he said.

In Afghanistan, most children become addicts as a result of their parents – passively inhaling their fathers’ opium smoke in the house, says Zarbadshah Jabarkhail, a doctor with the UN Office on Drugs and Crime (UNODC).

Or they are deliberately fed opium, for example by mothers who keep their children sedated while weaving carpets or harvesting opium crops, he says.

The root cause is poverty.

“It’s very usual. The majority of the families don’t know about the side-effects of opium. They don’t understand that if they give drugs to their children, they are also killing them at the same time,” he said.

“The proportion of children addicted has increased because we have more drug users and they are certainly affecting their children,” said Jabarkhail.

The latest US State Department survey on drug use in Afghanistan says the number of adult drug users could exceed 1.3 million, out of an estimated population of up to 30 million, with nearly 300,000 children affected.

According to the UNODC, the number of drug users in Afghanistan grew by 53 percent from 2005 to 2010.

UN officials say there are just over 90 drug treatment centres across the country, treating 16,000 individuals, up from 40 centres in 2009, and that just over a third of the centres are for women and children.

“We are ignoring these people if we don’t take care of them. These children are the future of their country. If they use drugs, they won’t be useful to their country,” said Jabarkhail.

Baspari, 28, and her five children aged from 10 months to 10 years old, are addicts.

She and her husband grow opium on their land, and she talks about the effect it can have: “Sometimes they dance, sometimes they sleep for three days in a row.

“I was given the same drugs when I was little. But when you’re running out of money, and your kids need medicine, you don’t have the choice,” she said.

But from now on, she says, things will be different.

“The doctors told me not to do it, so I won’t use it again.”