Smoking out tobacco: The rise of the e-cig | Lifestyle.INQ ❮ ❯ 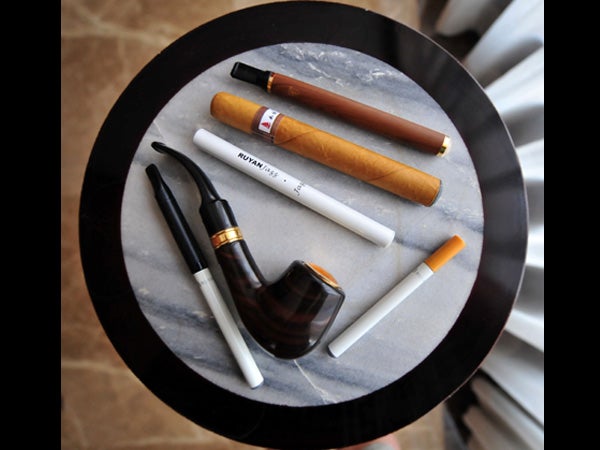 A file picture taken on May 25, 2009 in Beiijng shows a display of electronic cigarettes. NJOY is one of a flurry of e-cigs entering the market as tobacco prices skyrocket and smokers become ever more concerned about the toxins they inhale. The NJOY "cigarette" is electronic -- its tip lights up with the help of an LED and what appears to be smoke is actually water vapour. AFP / FREDERIC J. BROWN

Smoking out tobacco: The rise of the e-cig

PARIS – The camera zooms in on a stubble-bearded hunk dragging on a cigarette and blowing out a thick cloud of smoke with what seems to be great satisfaction.

It resembles the TV smoking ads of yesteryear, now banned in most of the world, yet this modern-day offering is approved for American television viewers.

“You know what the most amazing thing about this cigarette is? It isn’t one,” explains a narrator as the modern-day Marlboro Man fixes the viewer with a broody stare before returning the reusable smoke to a container that resembles the traditional pocket-sized cardboard pack.

The NJOY “cigarette” is electronic – its tip lights up with the help of an LED and what appears to be smoke is actually water vapor.

The actor is not smoking, but “vaping”.

“Cigarettes, you have met your match,” proclaims the ad for a product that claims to mimic “the look, feel and flavour of the real thing” – minus the tar, ash, smoke and most toxins.

NJOY is one of a flurry of e-cigs entering the market as tobacco prices skyrocket and smokers become ever more concerned about the toxins they inhale.

But the jury is still out on whether the gadgets are safe or not.

“Without question, e-cigarettes are safer than traditional tobacco cigarettes,” said Joel Nitzkin, of the American Association of Public Health Physicians.

“They deliver nicotine, with only the tiniest traces of other toxic chemicals.”

But there are concerns that these battery-driven alternatives, officially called electronic nicotine delivery systems (ENDS), may pose health hazards we are not even aware of yet – just like cigarettes before their ill-effects became clear.

“The safety of ENDS has not been scientifically demonstrated,” the World Health Organisation said in response to a query.

“The potential risks they pose for the health of users remain undetermined.”

The UN’s health organ said some testing “suggests the presence of other toxic chemicals, aside from nicotine”, and “strongly advised” consumers not to use them.

E-cigs first emerged in China in 2003 as an alternative to tobacco, which kills nearly six million people each year.

Just like their predecessors in the 1950s and 60s, electronic cigarettes are being advertised with attractive women and rugged, virile men – hinting at a better, more popular you.

It’s a strategy that seems to work.

A study in the American Journal of Preventive Medicine (AJPM) last month said 80 percent of users questioned in the United States, Britain, Canada and Australia believed e-cigarettes to be less harmful than their tobacco counterparts.

NJOY chief executive Craig Weiss told AFP that industry predictions are for electronic cigarette sales, which have doubled in the United States every year since 2008, to reach $1 billion (about 750,000 euros) in 2013.

“Growth in the category has occurred as a result of the millions of smokers who are actively seeking an alternative to cigarettes,” he said by email.

The company would not comment on the health aspects.

According to Nitzkin, the hazard posed by traditional tobacco cigarettes is about 100 times higher than today’s smokeless tobacco alternatives.

“When burned, cigarettes create a tarry residue that sticks to the inside of the smallest bronchial tubes of the lungs and in the alveoli, where the body absorbs the oxygen and releases the carbon dioxide.

“This tarry residue stays in place 24 hours a day, seven days a week for the life of the smoker,” he said – a side-effect that ENDS do not have.

Yet the European Respiratory Society said this month it could not classify e-cigs as a safe alternative to smoking, and stressed the principle that tobacco users “should not trade one carcinogenic product for another.”

Last month, the UK’s Advertising Standards Authority banned an ad for an e-cigarette, Nicolites, saying: “claims that the product was not harmful had not been substantiated”.

Some researchers have also expressed concerns that non-smokers may get hooked on nicotine through e-cigarette use, or that the gadget would keep people addicted to nicotine who might otherwise have quit.

Nicotine can be harmful to children, pregnant women and adults with heart disease.

A recent study among 3,400 high school pupils in France showed that 12 percent of 15-to-16-year-olds who claimed never to have smoked before had experimented with ENDS, and 19 percent of 17-year-olds.

“As a doctor, I cannot recommend the electronic cigarette,” lung specialist Bertrand Dautzenberg told AFP recently at the Pitie-Salpetriere hospital in Paris.

“But I would not interfere with a smoker who wants to take it up. With a cigarette, there is a 50 percent chance of killing oneself. With the electronic cigarette, we aren’t too sure yet, but it is probably less,” he said.