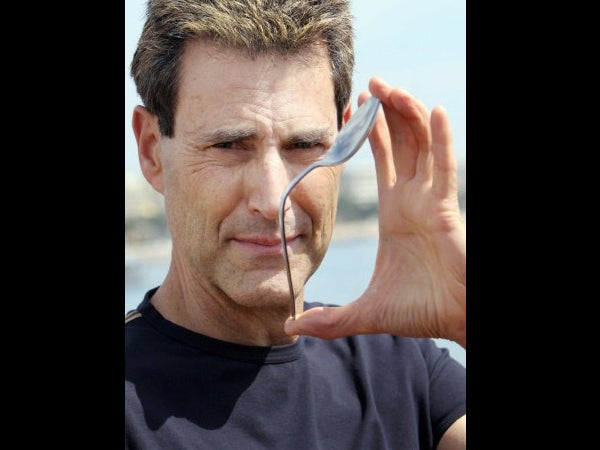 DANGEROUS IN THE HANDS OF AN AMATEUR. Israeli hypnotizer Uri Geller doing a centuries-old trick in a trade show in Cannes, France in 2007. More than entertainment, hypnotism could bring many benefits to mankind and help solve difficult problems if used in the proper way. AFP FILE PHOTO ERIC ESTRADE

The dangers of hypnotic regression

The growing acceptance of the concept of reincarnation, despite our strong Catholic orientation, has given rise to a good number of individuals performing past life hypnotic regression, even though they may not be qualified to do so.

Hypnosis is a safe and effective therapeutic procedure in the hands of a trained hypnotist, but it can be dangerous in the hands of an amateur. We’ve all heard stories of people performing hypnotic spells on others for criminal purposes. Many store cashiers and even bank tellers have been victimized by such criminals.

One dramatic case of an ordinary housewife who was hypnotized by an amateur hypnotist to go back to a previous life had disastrous consequences. The woman was regressed to a past life several hundred years before, when she was a beautiful and accomplished person.

She identified herself so much with that glorious past life, compared to her drab and uninteresting present life, that she had difficulty accepting her present status. She wanted to remain living in the past.

This is the story contained in the book, “The Search for Bridey Murphy,” which was made into a movie in Hollywood.

Because it is very easy to place a person under hypnosis, I have always refused to perform past life hypnotic regression on TV.

That’s why I was surprised to learn that Oprah Winfrey once showed an episode where a hypnotist placed a woman in a trance and brought her back to a past life, before the camera, from beginning to end.

According to psychologists, about 70 percent of the population can be hypnotized, and the rest cannot. That’s why hypnosis should be done only by competent and highly trained hypnotists.

But Filipinos being what they are, everybody wants to jump on the bandwagon without realizing its possible dangers or negative consequences.

Several years ago, I got a frantic phone call from a teenager. What happened was, several cousins ages 17-19 gathered to perform a past life hypnotic regression on their 18-year-old female cousin by using a procedure from a book on hypnosis. They succeeded in putting her in a trance and moving her back several hundred years.

Then all of a sudden, the hypnotized subject became agitated and started crying profusely. They tried to wake her up by shaking her shoulders. It didn’t work. They even slapped her, it didn’t work either. She remained in deep trance, crying.

Fortunately, one of them remembered me and looked for my number in the phone directory. They told me what happened. I asked to talk to the person who gave the entranced subject the hypnotic induction.

I gave him instructions on what to do to wake her up and call me afterwards. After about five minutes, one of them called me up and informed me the subject had waken up. I told them never to play again with hypnosis. They learned their lesson the hard way.

I have been conducting past life hypnotic regression for more than 20 years now in the Philippines and for three years in Poland. I have never had any problem of this nature. I always advise my students to never allow anybody to hypnotize them, no matter how light it is, unless they know the background of the person doing it. It should never be done by anybody who is not properly and competently trained for it.