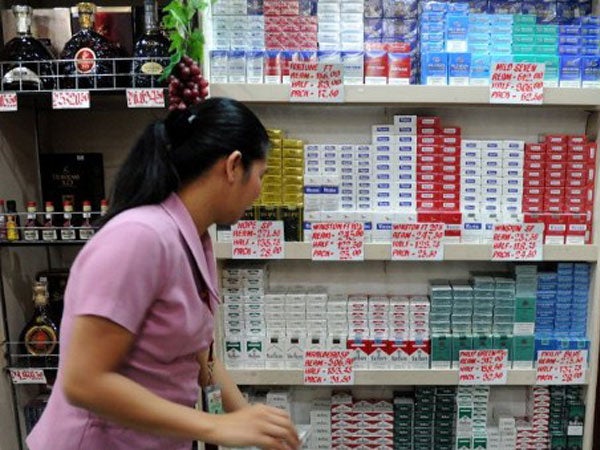 While smokers would readily share a stick or two to an acquaintance in the past, these days, smokers have become stingy with their cigarettes, due to higher retail prices brought about by the sin tax law. AFP FILE PHOTO/JAY DIRECTO

DAVAO CITY, Philippines—Forgot to buy your cigarette or did you suddenly run out of a stick to light?

Think twice before asking somebody to hand you one. More likely, fellow smokers would tell you they have run out of sticks, too.

While smokers would readily share a stick or two to an acquaintance in the past, these days, smokers have become stingy with their cigarettes, due to higher retail prices brought about by the sin tax law.

Prices of cigarettes across all brands have increased by more than 50 percent because of the sin taxes applied to tobacco and alcohol products.

Smokers have become more disciplined in consuming their supply.

Fidel, who has since shifted from Marlboro to Mighty Filters, said he would not mind sharing a stick to a friend, if it happened once.

But he said he would tell a friend he had run out of cigarettes, if his friend kept on asking for a stick.

According to Fidel, a stick of Mighty Filters now costs P2 at retail stores, much higher than what a stick of Marlboro cost in December.

“Marlboro was only P1.75 a stick then (before the sin tax law took effect), Fidel said, adding that the popular brand has been selling for P4 per stick at sari-sari (variety) stores.

Bernie, another smoker, said he used to ask for a spare stick of cigarette from friends whenever he ran out of one but now, he would be ashamed to bother them.

“I understand that cigarettes now cost much higher than before so I could not muster the word to ask a friend if I run out. It’s akin to molesting them already,” he said.

Bernie admitted that he himself had become “kuripot” (stingy) and would even hide the rest of his cigarettes when in a group of acquaintances.

“It’s better this way than flatly turning down somebody if he asks for a stick,” Bernie added.

At the corner of Sandawa street here, a group of tambays had found another way to keep their cigarettes and their friendship.

One of them was overheard telling his three companions that they should pool their P1 together so they could buy two sticks of Fortune menthol, being sold at P2 per stick at the nearby store.

A few minutes later, the Inquirer saw the man returning to where his friends stood and gave the second stick to one of them.

After a few puffs, they handed—almost simultaneously the half-consumed cigarettes to their two other companions.

“Fifty lang ta bay kay mahal ang yosi (Let’s just share the halves, friend, because cigarettes have become too costly),” one of the men said as he handed over what was left of the stick he had lighted earlier.