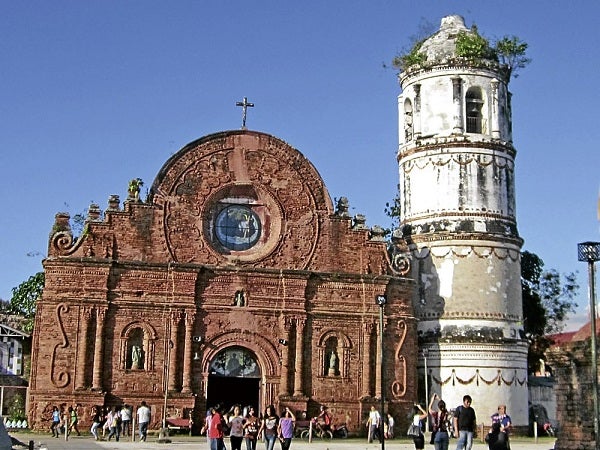 The province of Isabela in the Cagayan Valley Region is the “Queen’s Province.” Specifically, it was named after la Reyna Isabela la Catolica who, along with King Ferdinand of Aragon, liberated Spain in 1492 from the Moors who had controlled the southern peninsula for centuries.

The province is known for its Aguinaldo Trail in the Sierra Madre, leading to Palanan (where Aguinaldo was captured by the Americans, aided by Macabebe Scouts, posing as prisoners of war); idyllic coastal towns facing the Pacific Ocean and soon to be accessible by land; picturesque Magat Dam; and, among other attractions, the beautiful church of St. Matthais the Apostle in Tumauini, one of the greatest churches in the Philippines.

The unique church was completed in 1805, partially damaged during World War II, and restored by “the faithful of Tamauini.” It is made of thousands of red clay bricks. The façade’s “exaggerated rose window and bell tower which appears like a wedding cake have no parallels everywhere,” wrote the scholars Pedro Galende, O.S.A. and Rene Javellana, SJ.

The retablo (altar backdrop) is stark and simple, almost majestic, in contrast to others found in other Spanish-era churches. And there is no pantheon of saints.

There are other interesting churches found in the towns of Alicia, also brick-laden; San Pablo, Alibago, and the capital city of Ilagan.

Another tourist attraction is Magat Dam in the town of Ramon near Ifugao. It is a pastoral, sylvan scene (if you ignore the denuded mountains nearby), the waters approximating a large lake with an isle in the middle. Down below, you can see migratory birds flying around in the dam site.

The raging waters released by the power plant flow under Camp Vizcarra, a jamboree site, with its Hanging Bridge made of steel. A stairway leads to a grotto high up.

Camp Samal, a military camp this time, has been turned into a recreation area, with a swimming pool and an outdoor hall for snacks, and welcomes both domestic and foreign tourists.

For the adventure tourists, there is the Ilagan Sanctuary, which has been developed into a wildlife park. There is a playground ambience as you enter, with painted rocks which resemble Prudencio Lamarroza’s Amburayan series. If you use your imagination, Santa Victoria (the cave) can substitute for the Amburayan Queen.

Zip line riders swish through the air overhead, punctuated by yells of excitement.

There is a mini-zoo, hidden falls and nine caves but you are not expected to explore all of them.

As the Sanctuary employee put it, intending (or not) a pun: “Kung pupuntahan mo ang siyam na kweba, aabutin ka nang siyam-siyam (if you explore all nine caves it will take you forever).”

Bambanti is the Ilocano word for scarecrow, and this unattractive symbol-mascot was chosen, as festival chair Antonio (Tonypet) Albano explained, “to ward off pests from the fields of Isabela and also toward off bad luck and evil spirits.”

There was a flurry of events. Each town and city tried to outdo itself in the trade fair, with its giant mascot-scarecrows (higante) and attractive booths; dancing policemen; lively street-dancing competitions, with giant props and moveable screens; and related activities.

All in all, it was a very successful four-day event. And credit should go to the young dancers and drum-and-lyre musicians (and their conductors), who gave their all for their town, city and of course their province.

The fact that many of them got wet during the sustained rainshowers did not dampen their youthful spirit.