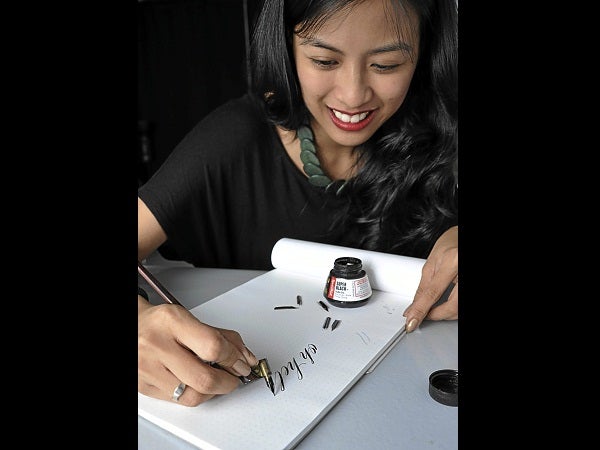 In love with calligraphy

Fozzy Castro-Dayrit has always been fascinated with letters and writing. “Arts and letters and words have always been my outlet and my source of happiness. I was one of those kids who had every color of pen possible in an impossibly crammed pencil case.” In high school, classmates would ask her to write their names on their binders and notebooks, using her different styles. “I liked drawing fat letters and skinny ones and swirly ones,” Fozzy said.

She was also in high school when she was given a Shaeffer Calligraphy Set. She taught herself by following the manual and soon discovered that she enjoyed calligraphy. But this passion had to take a backseat when she entered the world of advertising.

It was in 2009 when she revisited this old love, as she was preparing for her wedding. “Calligraphy was almost always present in every wedding blog I went to.”

Because she couldn’t find any calligraphy classes she could take here, she decided to teach herself again. “Through the help of unknown hours on Google, YouTube and the Fountain Pen Network-Philippines members, I found out about the materials I’ll need and the basics of the style I wanted to learn. It took a lot of patience and practice.”

When Fozzy realized that the paper they chose for the envelopes of their wedding invitations couldn’t be fed into a printer, she bought felt-tip calligraphy pens and addressed them herself. “Oh what I would give to readdress my envelopes now since I’ve grown better at writing! Haha! Can we turn back time!?”

Seeing her work, her husband Chips, who was still her fiancée then, told her, “You know you could charge people for that.” Fozzy said, “I didn’t think of it at the time, but I guess my brain liked the idea enough to store it somewhere for a future eureka moment.”

The wedding was over but Fozzy’s passion for calligraphy continued to grow. She practiced by writing Taylor Swift lyrics on blank index cards. She posted them on Facebook and they were spotted by Bong Rojales and Rossy Yabut-Rojales of Heima, who became Fozzy’s  first clients. “They wanted me to do a collab with them for their new collection’s art prints. I was over the moon. I wanted to faint, jump and cry at the same time.”

The collaboration resulted in beautiful prints, buttons, paper products and tote bags that feature Fozzy’s calligraphy. (Some of them are still available for purchase at Heima.) Fozzy said, “Working with Heima is definitely one of my most favorite projects. Just to see my work framed and hanging in their wonderful store was just awesome.  And then some people come up to me saying they have my work hanging in their room and they love it—is just wow. I can’t believe it sometimes.”

Around the same time, couples started asking her to address their wedding invitations. “I was new and they trusted me. My faith in myself grew with each envelope and job I did, and the fact that people still wanted hand-addressing for their invitations encouraged me. These first projects made me want to share the craft more, and actively try to keep it alive.”

It takes Fozzy three to five days to finish 100 to 150 envelopes so she usually works on one calligraphy job a week. But during wedding season, from October to December, she found herself writing almost 300 envelopes in a week. “It was crazy,” she said.

Fozzy also does digital and design work for her clients but she never neglects to practice her calligraphy, doing it at least a couple of hours a day.

Recently, she faced a big challenge: A client commissioned her to calligraph some poems for a wedding. “They were 11 to 15 lines long. Oh man, was this gut-wrenching! One wrong stroke and I’d have to do the entire thing over. I probably wrote each poem at least four times before having a spatter and mistake-free end result. I literally jumped up and threw my hands in the air when I was done with the last one. The elation and relief was indescribable.”

It isn’t easy but Fozzy really enjoys what she does. “I love calligraphy because it makes me happy. And it makes other people happy and feel special. Each word, each name, each letter I write is done so with so much love, with so much of myself. And with joy. I stare at old exemplars of master penmen and think how amazing the craft is. If you look at it, at something (at anything) done by hand like that, you’ll just know that it’s beautiful—forgetting the flaws, if any. Because it takes a lot of passion to accomplish that kind of work by hand.”

Inspired by her work, people started asking Fozzy to hold beginner’s classes. She says it took her a while to gather courage. “I needed to be confident in myself and my own skill level. I wouldn’t want to teach something that I couldn’t do myself.”

In May 2012, she conducted her first of her calligraphy workshops. Her next one will be held this summer. The session lasts three hours and includes lessons on basic strokes and technique for pointed-pen calligraphy. The P1,850 fee includes materials and a practice booklet. “Pointed-pen calligraphy can be accomplished with a flexible fountain pen (but the good ones may be expensive). But I believe that the best way to learn it is with a dip pen and a bottle of ink. Pick up a pointed or flexible nib, a nib holder and a bottle of ink. These can be purchased at Deovir or Scribe Writing Essentials. One can also do calligraphy with brushes and paint. Watercolor, acrylic or gouache would be the popular choice because they’re water soluble.”

Fozzy has tips for people who want to learn calligraphy. “Patience and practice! It’s a frustrating start, I’ll be honest. But if you really want to do it, just keep on writing and trying. Find like-minded people who will support you and inspire you and keep you happy as you learn from your mistakes. Oh and really, really, fall in love with it.”