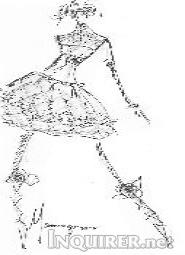 THE LATE couturier Louie Mamengo will always be remembered for his construction, prodigious beadwork, and penchant for black and couture fabrics, used in the most artfully restrained manner.

His signature was the figure-flattering black gown, encrusted with rhinestones and other dazzlers.

When he was in the terminal stage of lung cancer, he told his former ward and Philippine Fashion Week executive producer Joey Espino that he had savored his accomplishments and thanked the “source” for his talents.   He told Espino that his last collection was his way of giving back to a career that had been kind to him and as a way of glorifying God.

“My final message to all is to stop smoking. If you don’t have the habit yet, don’t start it.”

His former seamstresses, who now work with other designers, banded together to execute his designs,  which were done while he was confined at the UCLA hospital in California.

Mamengo’s tribute will close Philippine Fashion Week on May 15.

Mamengo was born on April 28, 1956. His parents had wanted him to be a doctor, hence he studied science and psychology at De La Salle University. As a graduation present, he went to Europe. On his own, he followed his heart by flying to Paris to study fashion and apprenticed with Azzedine Alaia and Paco Rabanne

He established his career in the early ’80s, building a reputation for his Parisian aesthetics—placing emphasis on the inner construction as with the outer. He soon attracted Manila’s socialites and celebrities such as Vilma Santos, Sharon Cuneta, Lorna Tolentino,  Nora Aunor, Gretchen Barretto.

Beauty queens who wore his designs always won in the evening gown competition. Carmi Martin would be the best-dressed star in an awards night.

“Professionals, celebrities, debutantes, their parents, party people loved his clothes,” says Espino. “A typical Mamengo woman was sure of herself, knew what she wanted and how to present herself in public. He taught people how to be elegant without attracting too much attention.”

One such example was Regine Velasquez, who was still a raw talent from Bulacan when she first met Mamengo. Under his wing, she metamorphosed into a concert diva. Mamengo was ahead of his time in mixing disparate styles. Velasquez paired her gown with combat boots, a look that was way ahead of his time.

“He would always know how to work with proportions,” explains Mamengo. “He would know how you can present yourself without showing any of your flaws. He tried to understand you, relate to you  and bring out the best in you. Every time you wore his design, you felt that it’s worth what was paid for it. Beyond that,  you felt really taken care of.  Designing was not just for his ego. Besides, he would not just look at the body, but rather at the soul of the one he was designing for. ”

When aggressive silhouettes were the vogue in Paris in the late ’80s, he knew where to take his fashion—back to the feminine curves.  He introduced the knit evening gown, popularized the tubular gown and used a lot of stretch velvet for signature siren gown a la Mugler.  The gowns emphasized the wasp waist and the curvy hips. 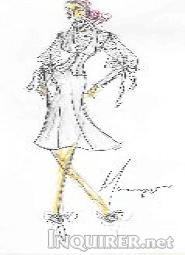 “The Mamengo woman was sexy but classy,”  says Espino.  “He was fond of luxe fabrics like silk gazar, peau de soie, silk gazar and infused rhinestones and semiprecious stones. He loved going to discos and parties. That’s why cocktail dresses and gowns were his forte.

Rajo Laurel recalls that his mother, Virginia Teves, who had very discriminating taste,  patronized Mamengo. She asked him if he could take her son, then a student at La Salle, to be an apprentice.

“He thought of the woman first,” Laurel says. “That’s why he’s so good. Behind the client’s wall, he would try the dresses himself and feel them. It seemed funny but in the end, the clothes had a sense of realism. As male designers, we can’t feel the clothes. But he had it. His clothes were real, not costumes.”

Espino agrees.  “He’d always tell me that in a well-designed garment, you should be able to freely move, jump, run or lie down. Trying the clothes on, he would even kneel down; sit down on the floor to test them. I learned from him is that a good outfit should be enjoyed; (it should not make)  you suffer.”

“He paid to homage to  Yves Saint Laurent and Valentino, yet he made wearable pieces,” says Laurel.  “My favorite collection was what you’d call the ‘Transformers’ today.”  The long dresses were hand-painted with different fashion capitals. Then the skirts would be removed to reveal mini-sheaths.”

Another of Mamengo’s unforgettable look was made for the New York Pret-a-Porter, a fashion trade show.  “He glamorized the duster, which is looser than the shift,” Laurel says.

Laurel credits his mentor’s influence for his penchant for flattering the female form.  “I learned how to appreciate drama and romance. Louie knew how to put on a show and evoke this glamorous idea of femininity. He himself was a very elegant man, he’d fix his home, conduct himself properly yet he was down-to-earth.”

In the mid-’90s, Mamengo migrated to the States  with his family. He continued his career, dressing well-heeled Filipino socialites and decorating their homes.

When he joined the Los Angeles Collections, his clothes were presented  alongside Tadashi, Nicole Miller and Andrew Mark. In an outing at New York Pret-a-Porter, Vogue magazine was impressed with his masterful rendition of hand-painted flowers in his designs. The luxury shopping destination, Americana Manhasset, ordered a velvet trapeze gown with an uneven hemline. Its special feature was the fusion of jusi with handpainted roses.

“He was one of the few designers who skillfully mixed indigenous materials with couture fabrics,” says Espino.  Although the store wanted repeat orders, Mamengo could only produce a limited edition because he didn’t have enough people to do the handwork.

Laurel notes that Mamengo loved to indulge in pleasure. It was his overindulgence, especially in cigarettes, that proved to be fatal.

Last April, Espino spent the night with Mamengo who confided in him. Mamengo gave Espino the first eight sketches and  detailed instructions on where to source the fabrics and notions in America. The director received the remaining designs when Mamengo died. He was barely 55.

The fashion show on Sunday would be “very Mamengo,” says Espino.  Even the models would sport the right attitude, understated sexiness. 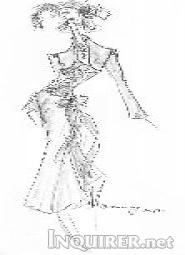 His lungs were so weak that they needed a life support system. Not only could he  not bear the excruciating pain, but he also regretted not listening to his father’s advice to quit smoking.  “Tell everyone to live as healthily as possible,” said Mamengo.

He added, “I want to share a piece of myself. It’s my way of giving back. I don’t want people to mourn over my death but to celebrate life.”