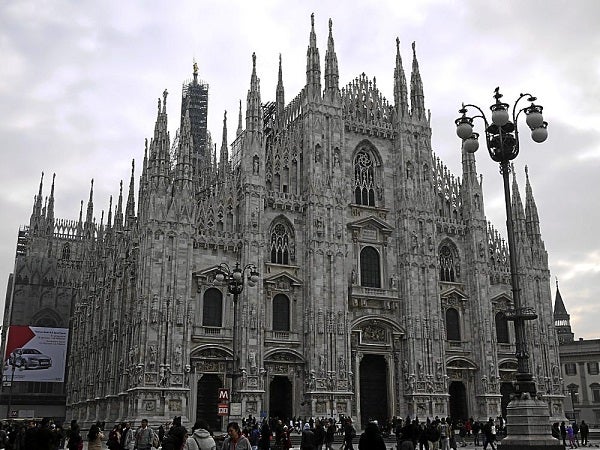 There is, as always, the dim view: “Tourism,” says American author Don Delillo, “is the march of stupidity. You’re expected to be stupid. You walk around dazed, squinting into fold-out maps. You don’t know how to talk to people, how to get anywhere, what the money means, what time it is, what to eat or how to eat it … You are an army of fools, wearing bright polyesters, riding camels, taking pictures of each other, haggard, dysenteric, thirsty. There is nothing to think about but the next shapeless event.”

Ah, but perhaps he hasn’t heard of tour guides? An excellent “travel director”—as the 65-year-old international travel company Trafalgar prefers to call its expert tour guides—is the antidote to stupidity on foreign soil.

Someone like Hamish Wallace, for instance—a Londoner who speaks five languages, has been to 45 countries, and has shepherded travelers from all over the world all over Europe in the last 15 years he’s been with Trafalgar. At one point, he even did tours of Cuba, where he met his wife.

The 25 years he’s been guiding people on their holidays has equipped the chatty, witty Briton with remarkable patience; a knack for brisk, unfussy organization; and an impressive command of facts, dates, anecdotes and gossipy tidbits to pepper his spiels with, as the tour coach rumbles through, say, the verdant Burgundy countryside.

Needless to say, under his expert ministration, none of us ended up dysenteric, thirsty—or wearing bright polyesters (it was bone-rattling winter in Europe, anyway). Haggard, yes, but then again the eight-day whirlwind trip was to take us from Paris to Lyon, Nice and Milan, with a side-trip to the medieval town of Beaune for some wine-tasting, and to glittering Monaco just before the border crossing to Italy.

Trafalgar had organized the trip for a group of mostly tour operators and travel executives from Asia, essentially the top resellers of its tour packages in the region, to showcase the kind of holiday experiences the company has been offering since 1947. (Trafalgar’s top general sales agent in Southeast Asia is the Filipino company Pan Pacific Travel Corp., which spearheaded the Philippine delegation in partnership with airline companies Cathay Pacific and its regional wing Dragon Air.)

Nicholas Lim, regional director for Trafalgar Asia based in Singapore, said the trip was to support the significant market growth—25 percent in 2012—that Asia is notching up. Since much of Europe remains in the grip of an economic downturn, travelers have the opportunity to experience the continent at relatively more affordable and accessible conditions.

“It’s a rare moment with the euro and the dollar low, and Asian currencies strong,” he said. Asian tourists are heading out in droves, and Filipino travellers aren’t far behind, in fact registering the largest growth last year—40 percent—second only to Singapore’s 50-percent growth rate.

Late January this year was a rather daunting time to visit Paris. It was hard to get around with snow and slush smothering the streets; the Eiffel Tower even had to suspend its second-floor viewdeck lift service for two consecutive days due to frost (“Something that has never happened in my many years in this job,” noted Hamish).

But trust the sangfroid of the French: Even as the snow fell, baguettes were carried around in the open, sticking with resolve out of bundled-up elbows and underarms.

And the Moulin Rouge raised temperatures as usual, as its spectacular chorus line of topless beauties performed the dances and routines—the most memorable a boy-and-girl pair doing hair-raising acrobatics on rollerskates, and an Amazon thrown into an ersatz pool to cavort with anacondas in the water—that have made the once-infamous district into the cultural landmark (and tourist magnet) that it now is.

For the Paris city tour, Trafalgar supplied additional firepower with Mireille, a local guide. There’s Rodin’s famous “The Thinker,” she gestured as the bus passed the sculptor’s garden adorned with his signature work and some other pieces. “They say ‘The Thinker’ has been thinking a lot because he doesn’t know where he left his clothes. A bit stupid, eh, especially in winter.

“On the other hand, the Mona Lisa is smiling—because she knows.”

A tour guide who pokes fun at her city’s most prized treasures? This was to be no staid, boring trip.

Trafalgar’s “Insider” positioning in the market, said Lim, is designed to be a clear differentiator. “We want to be the company that brings authentic experiences to our clients, and that applies to any destination or itinerary we operate in, whether in Europe, North or South America, etc. And who better to show them that except an insider? You need the best travel director to make everything come together.”

In the case of Hamish, it meant that, whether in Paris or Nice, he knew where and how to get to the nearest Galeries Lafayette (France’s SM) for the benefit of our shopaholic co-travelers. He could expound on Burgundy’s traditional beef bourguignon (Julia Child’s pièce de résistance in “Julie and Julia,” remember?) as easily as he could point out the mountain highway in Monaco where Cary Grant and Grace Kelly zipped along in “To Catch a Thief.”

To relieve the tedium of the drive from one city to the next, he let his personal touch—and a bit of show-biz pizzazz—do part of the talking.

Everyone got a taste of one of Paris’ signature treats, Laduree macarons, as the bus exited the city for the south of the country. Later, to underline the spirit of Italian amore as the coach breached the border on the way to Milan, he surprised the ladies with a red rose each—to the strains of, well, Dean Martin’s “That’s Amore,” The Three Tenors’ “O Sole Mio” and Mario Lanza’s “Be My Love.” (He ducked out to buy the flowers while the group toured the venerable perfumery Fragonard in Nice, a region also known for its blooms.)

His well-cultivated network also meant he could wangle special perks for his flock—say, pre-arranged tickets to the Moulin Rouge dinner-show, allowing us to bypass the long queue in the cold outside (dinner with show is 150 euros; after-dinner with drinks and show is 75).

The visit to the “hidden treasure” of Saint-Paul-de-Vence was another surprise—an unannounced detour Hamish had devised with the coach driver, the Italian Pancrazio Fillari, a man of impeccable driving skills (how he could maneuver the behemoth through those narrow Parisian streets was a marvel).

(Pancrazio had been to the Philippines in his younger days; he still knew how to say “Magandang umaga,” “Mabuhay!” and “Talaga?”.)

The town is a stunningly well-preserved medieval city atop a hill whose undulating cobblestone streets, ancient cellars and modest Gothic structures now host an array of contemporary art galleries, curio shops, patisseries, fashion and jewelry stores, and edgy public art sitting cheek-by-jowl with silent fountains (the one in the town square dates to around 1615) and gray ramparts.

Its august stillness (James Baldwin spent his last years in Saint-Paul-de-Vence) turned out to be the perfect prelude to the brash modernity—and impossibly azure skies—of Monaco a couple of hours down the road. Here, too, the group got regaled on the finer points of the Oceanographic Museum’s sea-motif architecture; the glamour of the  Formula 1 circuit; and the saga of the ruling House of Grimaldi, before we were let loose for lunch in the boulangeries and cafés that dotted the old-town section of the principality. (Wi-Fi password in our resto? “hongkong”)

Pancrazio’s driving was put even more to the test on the way to Chateau la Dorgonne in Provence, where Trafalgar had arranged a “Be My Guest” lunch for us with the owners of the winery.

“You’ll be welcomed into private homes, working farms, wineries and other family-run establishments for a true taste of local culture,” promised the Trafalgar brochure about the experience.

Indeed, but before that, we got lost for some time going to the chateau, Pancrazio driving the bus gingerly through winding, twisting streets in search of the destination.

But, in a way, getting lost also seemed oddly reassuring; this was, indeed, off the beaten track, a slice of authentic rural France. The reward would prove to be a heavenly lunch of salad, Provençal casserole and panna cotta, in a gracious family residence where Brad Pitt and Angelina Jolie were said to have once stayed; plus a view of the picturesque countryside and a tour of the winery that produces the estate’s premium wines—sold only in the finest hotels and restos in Paris and not available in supermarkets.

“It’s all about the experience,” said Lim. “With ‘Be My Guest’ and our ‘Insider’ knowledge, we want to offer more, add a greater depth to your travels. Our clients find Trafalgar’s guided holidays value-for-money, because everything is all in—transfers and door-to-door transport from one point to another, well-chosen accommodations, unique places and activities; and, of course, our excellent travel directors like Hamish who will take care of you every step of the way.”

And, if we may add, having learned it the happy, constantly surprised way—keep us from ending up stupid tourists.

Cathay Pacific and Dragonair fly from Manila, Clark and Cebu to seven cities in Europe (via Hong Kong), including other destinations in Canada, USA, Australia, New Zealand, and South Africa. For inquiries, call Cathay Pacific Manila 7570888, Cebu (032) 2313747, Dragonair at 7570111, or visit www.cathaypacific.ph.