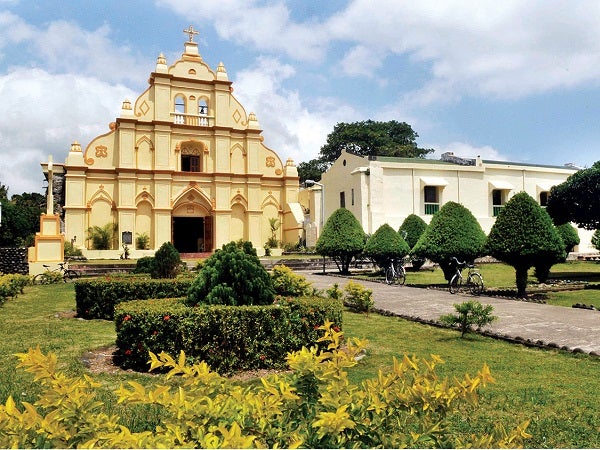 PILLAR OF FAITH Basco Cathedral of the Immaculate Conception, initially built in 1783 by Dominican missionaries using wood and cogon, was rebuilt using stone in 1795. Painted in sunflower yellow, it is the oldest church in Batanes. MANDY NAVASERO/COLUMNIST

Five pillars of faith in Batanes

An encounter with the five oldest churches in Batanes leaves one with the feeling that neither storm and winds nor isolation and time could extinguish the flame of faith that lives within the island’s people.

The feeling is inspiring and whenever I visit with my Batanes Photo Safari participants, we always find ourselves singing “Ama Namin” with total abandon, deep faith rising from within ourselves.

The first house of Catholic worship at Basco was built of cogon and wood by the Dominican missionaries Balthazar Calderon and Bartholome Artiguez upon their arrival in 1783.

The plan for a large stone-and-mortar church was ready in 1787, but actual work began in 1795. The first church was probably built where the capitol building now stands.

That first stone church had Gothic features as may still be seen in its lancet windows on the north wall. Its woodwork was imported from Cagayan, and the master craftsmen of carpenters, stone cutters and masons also came from Luzon.

The church was roofed with cogon, which gave way to galvanized iron in the 20th century.

The Cathedral of Basco is the Cathedral of the Immaculate Conception, patroness of the Batanes. According to M. Madriaga, DD, who authored “The Coat-of-Arms of the Ecclesiastical Jurisdictions in the Philippines,” in Philippine Studies, 5 (1957): 429, the silver crescent on the original Episcopal coat-of-arms of the Prelature symbolizes the Immaculate Conception, titular of the principal church in the prelature.

St. Domingo de Guzman is the patron saint of Basco town, not of the cathedral.

The San Carlos Church of Mahatao began as a mission chapel in 1787 and was replaced by a stone-and-lime church, which was destroyed by a storm in 1872.

The present church was built by Fr. Crescencio Polo, OP, in 1873. In the church’s prime, the interior was decorated in baroque style, with floral designs and sunbursts as ornament painted in polychrome and gilt. This was to produce the effect of a golden glow and sparkle among the serene statuary.

A peculiar common feature of churches in Batanes was that the principal road commonly called Calle Real often led right up to the main side door. It is so, with the Mahatao church.

There were three mission chapels in Ivana located in Said, Kadpidan and Radiwan but Radiwan was chosen to be the permanent site for  St. John the Worker Church of Ivana. It was in this site that Fr. Francisco de Paula Esteban laid the foundations of the church and possibly the convent in 1795. The original church was much larger then, as it was designed to accommodate the people of Ivana, Sabtang and Uyugan.

In 1844, the Isabtangs, who were resettled in Ivana after a massacre, were officially resettled on Sabtang Island. Thus, when the cogon-roofed church burned down, it was reduced by a third of its original length.

Of the Batanes churches, the church of Ivana has the most commanding view because of its location. It is built on elevated ground at a point where the island bends and the sea approach from the Balintang Sea into the Batan-Satang strait and the northwestern sea exit to Vuhus and Itbayat are visible.

The San Vicente Ferrer Church of Sabtang began as a mission in 1785 but no resident missionary was assigned there.

In 1791, Cagayano agents of the Spaniards sent to procure supplies in Sabtang were killed over payment of the goods. The mangpus (datu) Aman Dangat of Malakdang was blamed, arrested and executed at Basco.

The Isabtangs were then forcibly resettled in Ivana from 1791 to 1841. In 1844, Sabtang was reestablished and recognized as a mission vicariate.

The Sabtang church was also modeled after the Basco church in both floor plan and façade,  which projects a heaviness of appearance. Its profile is baroque.

The Itbayat Church on the third island of Batanes is built in the town center on the top of a cliff by Dominican missionaries in 1875. Its patron saint is the Immaculate Conception.