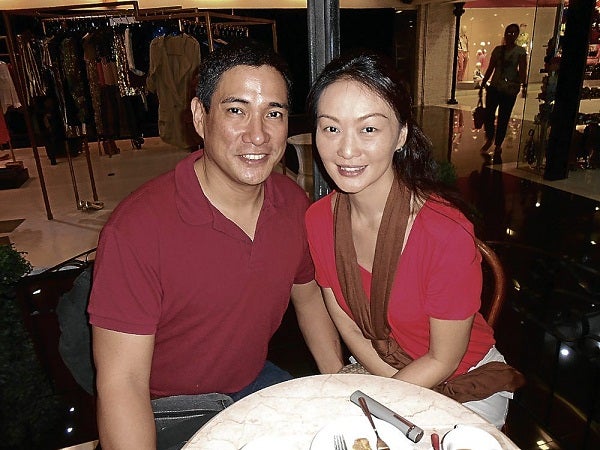 Is it a case of life imitating art, or vice-versa, when one sees Marina Benipayo and Ricardo Cepeda privately enjoying each other’s company at a coffee shop inside a mall?

The couple have known each other for years, when they used to cross paths as fashion models, before they met again—more than a year ago as actors on the set of the ABS-CBN teleserye “My Binondo Girl.”

The funny thing was, Benipayo recalls, nobody among the TV production people knew how to get in touch with her when she was first being considered to play Cepeda’s wife. “Except Ricardo, who knew my phone number,” she says, laughing.

Cepeda, now her real-life boyfriend, excuses himself to go to a nearby Internet shop when we arrive. “He used to tell me, Benipayo recalls, “that I can be a model. Sabi ko, ‘ayoko nga (I said, ‘no way’). He was already popular then.”

The truth is, Benipayo has never shunned anything she finds interesting or useful in life. Apart from having been one of the most sought-after ramp models from the mid-’80s to the ’90s, and even today—she remains a favorite on the ramp, parading the most challenging-to-don bridal gown—the 44-year-old mother of two has worn many hats. She held office jobs in a golf and country club and a government agency, taught grade-school kids, does consultancy work in modeling schools, and seminars on image enhancement and behavior management—while raising a family on her own.

“If you have kids to feed, you will do anything, except pole-dance,” she says, laughing again at the way she makes fun of her experiences. Seriously, she adds that when an opportunity comes and she knows she can make the most of it, or at least she can learn along the way, she’ll grab it.

That’s how she found herself acting on TV—first in “My Binondo Girl” to play Menchu, the new mother of teen heartthrob Xian Lim’s character, Andy, after his “real” mom, Ningning, played by Glydel Mercado, had to drop out of the series due to pregnancy.

“I think it was tsamba (luck),” Benipayo says of how she got the role. The show’s executive producer, she recounts, had told her that he remembered how she looked like after reading her articles on parenting in Inquirer Lifestyle. “The show needed a tall chinita na mayaman ang pamilya (someone with Chinese features and from a rich family),” she explains, “and so I was given the job.”

She must have earned good feedback, she points out, because when “My Binondo Girl” ended its run, she was offered another role in a new series, “Princess and I.”

Benipayo chuckles as she differentiates her roles in the two shows. In “Binondo Girl” she always provided the happy moments, when she needed to cheer up her son or lighten up the mood. But in “Princess and I,” she says, “I was crying in 80 percent of my scenes.”

The irony of it is that she never took any acting workshop, not even the most basic lessons, that would have helped her shed a tear on cue. And her very first scene required her to cry.

So, how did she do it? “I was so embarrassed to tell the director that I was doing this for the first time,” she says. Fortunately the tears fell, she beams, although not the way the director wanted it, like they had to roll down one side of her face. “The scene was about my marriage breaking up. I just related it to real life.”

Benipayo is no stranger to that situation. She struggled for almost 10 years, relocating from Manila to Angeles City in Pampanga, to make ends meet with two growing children. There was a time, she says, when she had to use a candle at night to save on electricity. “At kung ano ang kumot ko sa gabi, yun ang kurtina ko sa umaga (What I used as my blanket at night also served as my curtain in the morning).”

In 2007 she suffered a mysterious ailment. Even her doctor friends couldn’t determine what was wrong. She went through fainting spells and her body system shut down.

There were times she’d be bedridden. “My kids would say, ‘Mommy, are you dying?’ And then I’d reply, ‘No, I promise you I won’t die.’”

She surmised that her body was calling out for her to rest for a while and consider a change in environment. She quit working in Angeles and moved back to Manila. Friends helped her find a house to rent and a good school for her kids.

One day, her rented house in Kapitolyo, Pasig, was robbed while she and the kids were out. “I was crying hard because we lost all our valuables,” she says. “Friends comforted me, saying at least I had my ATM card. But they didn’t know I had only about P2,000 in the bank.”

But even in the worst possible conditions, Benipayo never lost her drive to move on, reminding herself that “nothing is impossible if people use their brain. Sometimes people don’t believe me, akala nila lumaki akong mayaman (people thought I grew up rich).”

Her mother was widowed early. Benipayo, the only girl in a brood of four, is proud of the fact that, as a college student at Miriam College, she worked at McDonald’s, earning P12.50 an hour to augment her daily allowance of P20, which was just enough for her jeepney fare and a snack of pancit palabok in the school cafeteria.

She likes to quote Steve Jobs, “stay hungry, stay foolish,” to illustrate her motivation to succeed in life. She has played the part of being foolish, to a certain extent, during her peak as a model.

In those days, she recalls, “there was a certain look that was generally preferred, the Pinay mestiza. But I look Chinese.” So she began observing other models and how she would stand out but without stepping on anyone’s toes.

Her idea was to act like the whole thing was a performance. “I usually had to dress up as a bride in the finale,” she recounts. “If you’re in the finale, that is the vision of the designer. So I would ask the director and the designer if I could do things that would make the gown come out more alive. Wala na nga akong laban sa mukha, e ’di daanin ko na lang sa performance (I couldn’t compete with my looks, so I relied on performance).”

She considers acting on TV a “part-time job” that is worth her while, even if she had to sometimes wait long hours on the set. She’s open to accepting more roles, if and when they are offered. “Remember, I’m always ‘hungry and foolish,’” she quips, before giving us a high-five.