Fast-paced yoga to pump up the heart | Inquirer Lifestyle 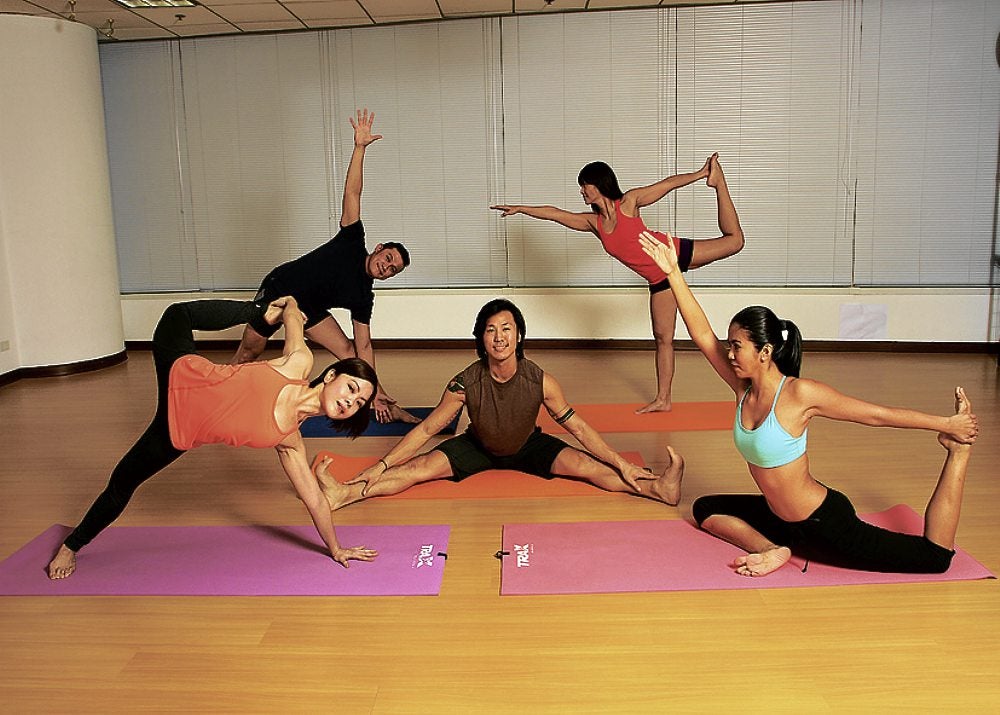 Fast-paced yoga to pump up the heart

YogaFIT is the new kid on the yoga styles block. Not only does it aim to make the poses both fun and beneficial, but it also defies yoga conventions.

There are no pranayama or breathing exercises; no sun salutations or long poses; no slow transitions or chanting. The whole hour packs a wallop of continuous movements from pose to pose to pump up the heart. There are balances with limbs thrust into space and stretches that open up the tight or contracted areas such as the torso and the groin.

Bruce Chung, a Filipino-Korean trainer from Absolute Yoga in Bangkok, recently visited Manila to launch this new workout at the Options Studio. YogaFIT is what the name connotes. It focuses on the physicality of yoga, with emphasis on speed to increase the metabolism and burn more calories. It doesn’t guarantee weight loss, he said, but hopefully, your clothes will seem looser.

YogaFIT’s creator Kru Knot (a.k.a. Theera Anukunprasert) developed a program that would make yoga accessible to the beginner yet challenging to the regular practitioner. While traditional yoga is geared toward leading to spiritual awareness, YogaFIT is designed for the urban warrior who wants a fast but effective yoga that could easily fit in his lifestyle.

The class is divided into four series of movement flows. “Each one contains a break at the end, but hitting a peak,” Chung said. “From the beginning, there is a focus on core awareness.”

The workout begins with the cat cow posture in which one is in a crouching position, flexing and extending the spine with additional leg movement coordination. Then it builds up to work on the major parts of the body. “We don’t use advanced postures. They are all foundational poses. The  challenge is the pace and the continuous movements. It’s how we make the transition to all the postures together, how we link together. That’s what increases the level of difficulty,” Chung said.

Another challenge also lies in the transition to the next pose, such as transfers of weight for balance. “If we go from a lunge into a balancing pose, more core awareness is required from students.” 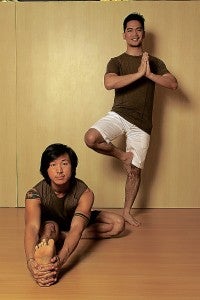 YogaFIT has been scientifically designed to weed out exercises that could lead to common injuries on the knee and back. It also eschews inversions such as the handstand or headstand so as not to intimidate beginners. Still, there are lots of backbends and forward bends and the transitional downward dog. Those who want some muscle power can attempt the crow or crane pose where you balance on your arms.

Chung warned that some students could get discouraged by the pace of the class. “If they are not used to rapid movements, they will tire quickly and will have to rest. When they rest for half of the class, they feel they can’t do it.”

He admitted that he also had to take it easy while learning YogaFIT.  “When we were learning the series as a group of teachers, during the first few sessions, I was in a child’s pose for a third of the class.”

But don’t be daunted by the fast pace or the constant switching of legs. In fact, you’re trying to help students become more physically fit, said Chung. As in most physical activities, the more one works out, the more strength and stamina will be gained.

Any responsible teacher should know the physical conditions of the students and modify the poses to avoid injury. He added, “I don’t like to use the word ‘limitations.’ It’s about not pushing yourself too far that you’re injuring yourself.”

Chung reminded that the stomach must be empty before yoga class. “If you eat an hour before the class, the digestive system is already using a lot of energy. You won’t have as much energy. And because you’ve got all this food (in the stomach) with forward bending and twisting, it’s not great for you.”

Launched last September in Bangkok, YogaFIT has become one of the most popular classes in Absolute Yoga. The studio organized a 30-day yoga challenge in which students were encouraged to enroll in 30 YogaFIT classes in 60 days. Some enrolled in two or three classes a day. This month, Absolute Yoga will introduce a YogaFIT series targeting the butt and thighs.

“As the name suggests, it will focus on strengthening and improving range of motion in the hamstring and hips and strengthening the glutes and quadriceps,” Chung said.

Chung has been practicing yoga for eight years. He started with hot yoga in Canada. He took up Yin Yoga, a series of passive postures where the poses are held for three to five minutes. “It’s intended to open the fascia, the connective tissue.”

In his journey, he took up the metaphysical aspect of yoga called moksha which means liberation. He also visited ashrams in India.

When Chung moved to Bangkok, he began teaching at the Absolute Yoga Studio. “All teachers have their own style. I try to stay true to what yoga means for me: connecting to the breath and being fully aware of the body when you’re moving.”