How I tamed my toque envy | Inquirer Lifestyle ❮ ❯ 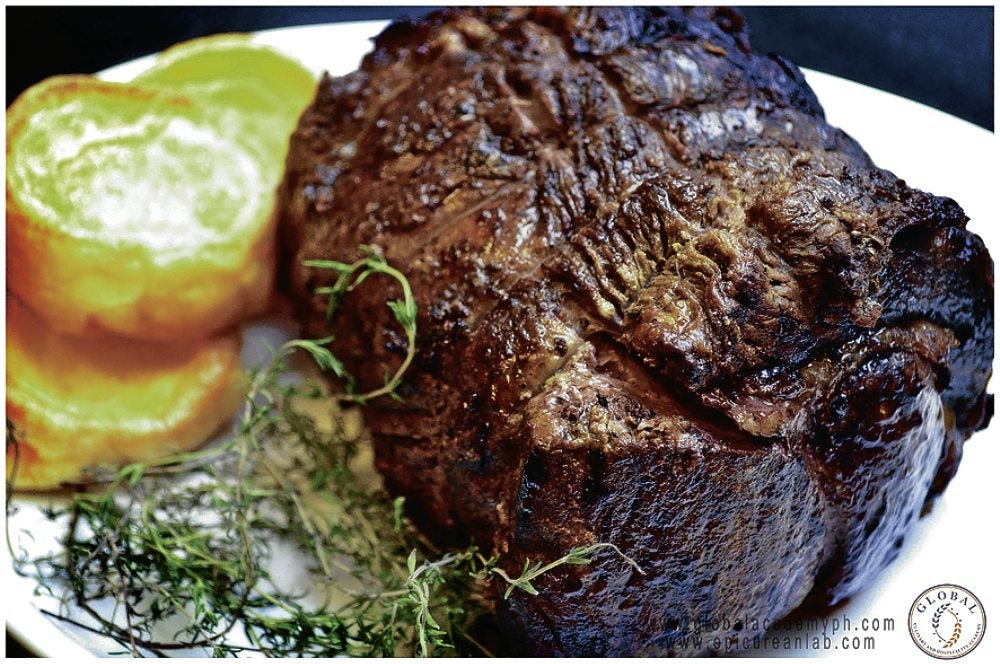 How I tamed my toque envy

Call it “toque envy,” but after watching all those chef shows on TV, I realized that I’ve developed this irrepressible longing to don a toque whenever I serve anything that requires use of spoon and fork.

With a constant diet of Anthony Bourdain’s “No Reservations,” I’ve convinced myself that, crowned with a toque, I could be as snide and self-mocking as this peripatetic food critic. Well, why not? I could certainly spell and pronounce a few French culinary terms and know exactly what they mean:  mise en place, bain marie, petit four, bouillabaisse, crème fraiche, mirepoix.

And so, armed with a huge helping of delusions of grandeur, I set out to find the perfect culinary school, here defined as:

1) Not too far from our office, lest I look like smashed potatoes after braving all that traffic, instead of channeling the gorgeous Padma Lakshmi or Gail Simmons;

2) One that offers short courses, since I’m not looking for a midlife career change, just some bragging rights with matching photos to post on Facebook;

3) Not too expensive. Admittedly, mistakes can be costly, but I certainly don’t want to hock the kids just because my soufflé didn’t rise.

After much Googling and exploratory phone calls to several culinary schools, I settled for Global Culinary & Hospitality Academy, which offers three-hour, hands-on and demo classes by some chefs whose names I vaguely recognize.

When I enrolled some months back, the classes were from 9 a.m. to 12 noon, and at P3,000 a pop (less an early bird discount of P500), were quite affordable.  (These days, the classes stretch to five hours. Check out www.globalacademyph.com for more info.) The fee covers the handouts, the ingredients, and the food we could eat after.

The biggest plus was paying only for classes I wanted. Definitely, I didn’t want a basic culinary course that includes killing and dressing up chicken, a grisly process that would make an animal rights activist of anyone, including Hannibal Lecter.

So off I went to my first Global Academy session in mid-September, with no less than chef Him Uy de Baron showing us how to cook wagyu ramen, beef tataki tostada in uni butter, pickled watermelon and, for dessert, coconut panna cotta with fresh pineapple and kaffir salsa.

The demo session turned out to be a small, informal and interactive class of 12 students composed of some folks already taking up culinary arts in the same school (I hate overachievers, don’t you?), and 10 women who are a good mix of students, young housewives, the idle rich, and one competitive show-off (me!).

Because as soon as chef Him called for volunteers to braise the meat, there went eager ol’ me, who firmly held down the beef to the hot nonstick pan with a pair of tongs. Then it hit me: Why am I the only volunteer for this task?

Well, genius, braising meat leads to smoke, and smoke goes up and coats everything around it—hair, clothes, skin. Great, I consoled myself.  Now the whole office would know I had wagyu beef for lunch. Not only that, I also bathed in it.

But the school was right in billing the demo courses “A Dash of Fun Cooking.” The chef was casual and chatty, and invited us to try our hand at actual food prep so we’d end up with something edible, on top of shooting fabulous FB pictures.

Global Academy’s brand and marketing manager Anna B. Ledesma explained that the short cooking classes “cater to people who just want to learn how to cook in a fun and relaxed environment.”

The classes, Ledesma said, are kept small (maximum of nine for hands-on courses, 12 for demo), so the chef instructor can closely supervise each student.

Indeed, we asked a lot of questions that the affable chef answered patiently—from the cooking process involved, to where to source the ingredients, and how much they were.

That’s how I learned that at P700 a kilo, wagyu beef cheeks are considered the cheapest cut in this premium meat category, since they’re relatively tough:  “The cheeks get exercised a lot because what cows do mostly is chew; these are the only muscles that move all the time,” chef Him explained, adding that the best wagyu cuts can be found at Santi’s or Umalag Farms.

But wagyu is half fat because it’s this marbling with fat that gives it so much flavor, the chef added. “Trim off the fat but leave a little for flavor. Also, cut the meat into portions before tenderizing or the meat will fall apart if you cook before you cut.”

If you’re on a budget and wagyu is too expensive for you, local short ribs can be used instead, chef Him said.

One thing I learned from this session: It can be tedious to make good stock. “Use pig trotters, but brown first before boiling for eight hours, or one hour in a pressure cooker.”

In fact, making a full-bodied ramen involved so many steps and lots of expensive ingredients that I’ll probably just order a bowl next time I eat out. Same reason I just order lengua, kare-kare, callos and paella instead of cooking them: too much work involved.

Like my first class, this second session was as informal and interactive, with students eagerly pitching in to stir the batter for the Yorkshire pudding and grate the boiled potatoes through A decidedly younger batch this time, some of the students said they were looking to go into catering later, although one said she just wanted to cook really good meals for her family.

Already I’m checking out the next offerings. Because, to my relief, senior moments can come few and far between when the learning is practical and immediately applicable on one’s next meal. Yup, you can teach old hags new tricks!

In fact, this unschooled cook learned quite a few tricks from the pros from this second session alone, among them:

Yorkshire pudding isn’t a gooey dessert, but a rather bland puff pastry similar to a croissant.

Local cattle is tougher than imported beef because it’s allowed to grow older (thus bigger and therefore meatier, so it would fetch a bigger sum when sold).

When boiling greens, salt the water to keep the veggies green. Let the greens wilt in hot water (about 30 seconds) before immersing in an ice bath to stop the cooking.

Always use unsalted butter for cooking so you don’t mess up the seasoning.

And the best learning of all:  As long as you enjoy cooking, you don’t need a toque to feel like you’re a top chef.